Wow. This is gonna be my first picture-laden post in a long time!

I recently received both the UK "Collector's Edition" of Darksiders II and the French "Premium Edition". I wasn't expecting too much difference between them (other than the fact that the French one is numbered), so when I opened them both, I was truly in for a surprise. 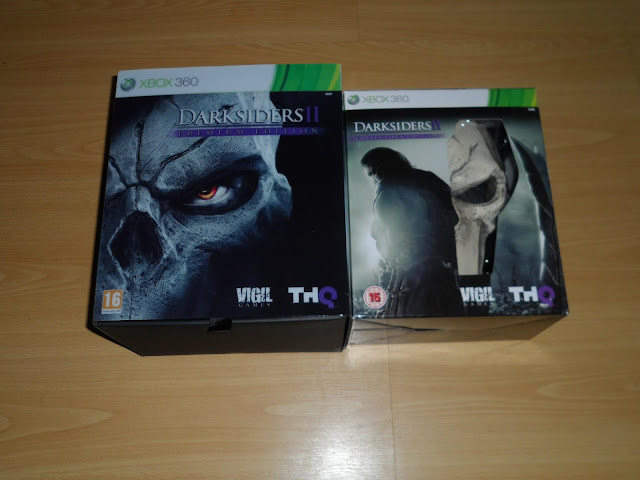 Okay, left hand side is the French Premium Edition, and to the right is the UK Collector's Edition. Quite a fair difference in size. Nothing insanely drastic, but enough of a difference to be quite noticeable. Also, weight difference between them was quite large. French one being the heaviest, as you'd expect. 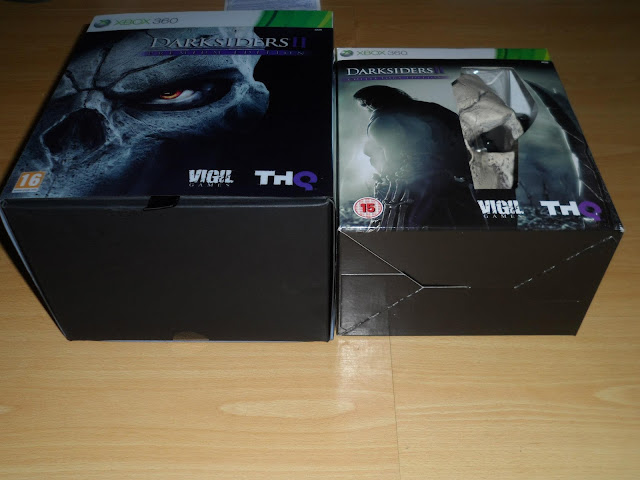 From an angle, just to show you that the size difference isn't only in height/width, it's also in depth, too. As you can see on the base of the French one, it was sticker sealed. Same goes for the UK one, no cellophane/shrinkwrap seals here. 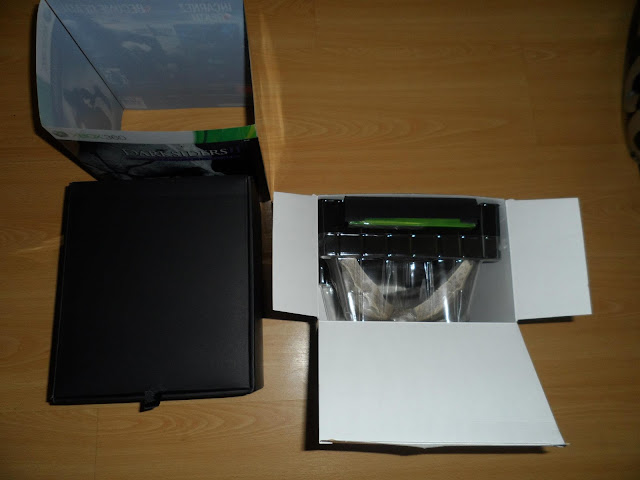 Okay, this is where comparisons get a little awkward. The French one on the left has a plastic slipcover over the top of a thick, rigid, black fold-over box. The Uk one however, is thin cardboard, and just opens like a regular box. Tab on the inside of the lid inevitably got slightly bent in the centre, as they usually do with this type of box. 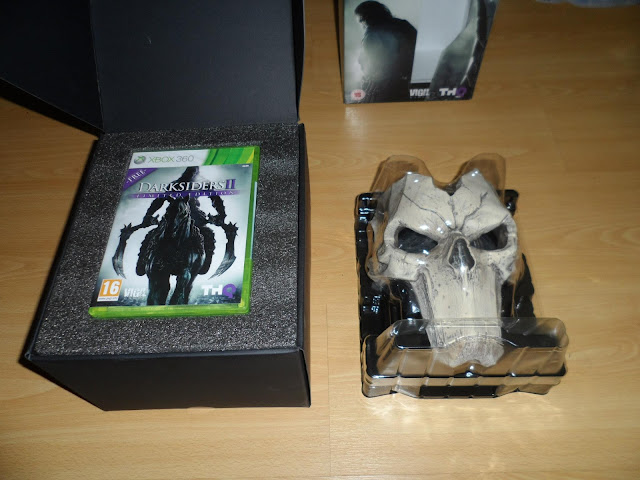 Once you open the boxes to reveal the contents, this is what you get. Again, French on left, UK on right. As soon as you open the flip top lid of the black box for the Premium Edition, you see the game, bam - it's right there. You'd probably expect that since the game is (probably) the reason that you bought the edition, so it's nice to see that that is the first item you see inside. On the right, once you empty the contents of the UK edition, you can see the Death mask replica, underneath a sheet of moulded plastic. We'll locate the game later. 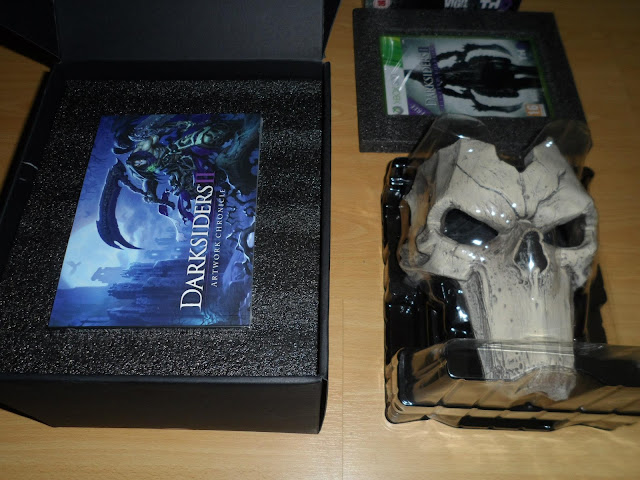 No change to the UK edition here, but with the French edition, once you lift out the game and the first "frame" of black foam (is that foam?), you will find a sealed paperback copy of the art book. 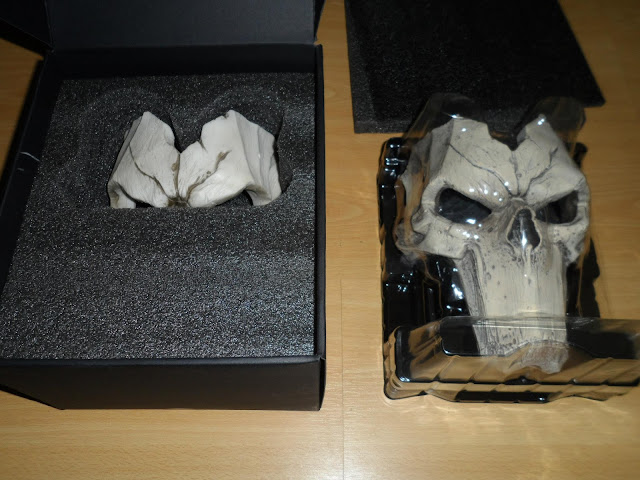 Another layer of foam comes out, and there you have it. The start of the Death mask. It's still well protected under more foam, but now you're starting to get excited! 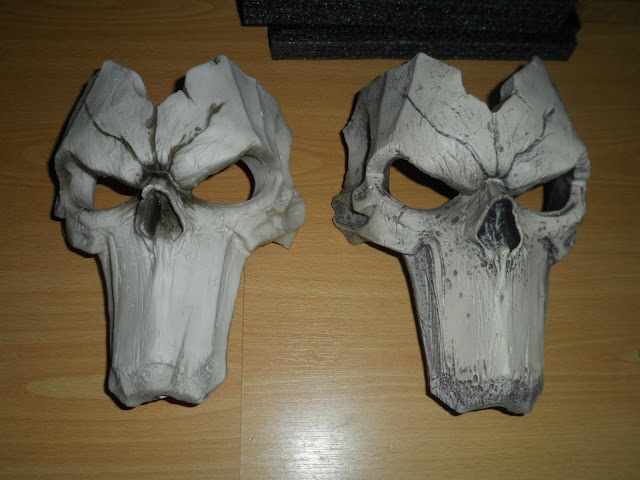 The two Death masks, side by side. They appear to be the same size, but the French one (again, on the left) is MUCH weightier than the UK one on the right. The French one appears to be made from a resin-y type material, and is very well made. The UK one, in comparison, kinda sucks.

I actually received my copy of the UK CE first, and when I opened it, I was really happy with it. It's still a great piece, but if you happen to own both, then you will definitely prefer the French mask, and probably the whole French edition, overall.

TIME FOR YOUR CLOSE UP! 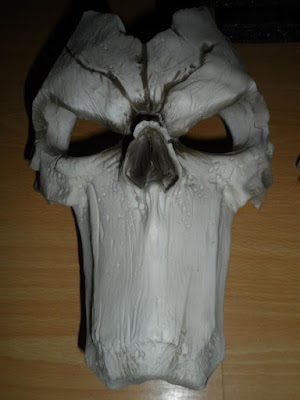 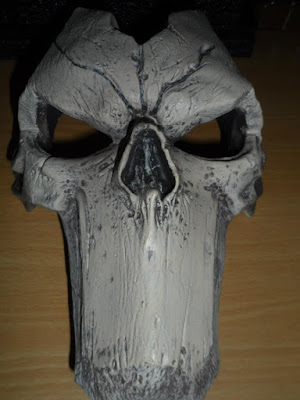 Okay, so next I decided to do a little experiment with the scales, just to show you exactly what I mean by the weight difference.

Here is the UK mask, being weighed first (since it's the lightest): 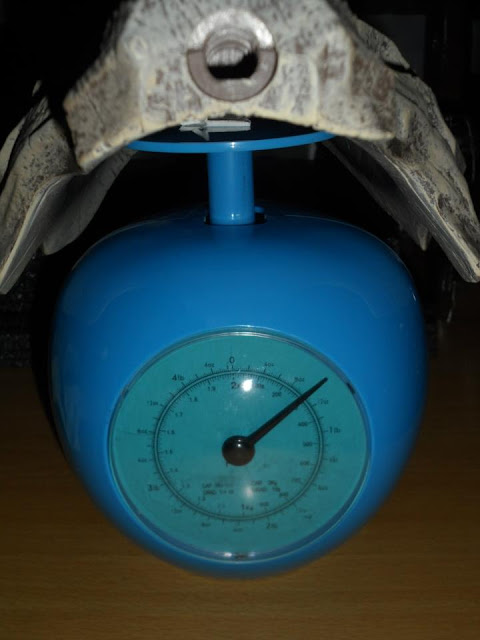 And next, is the French mask. See that massive increase in weight? There you go :) 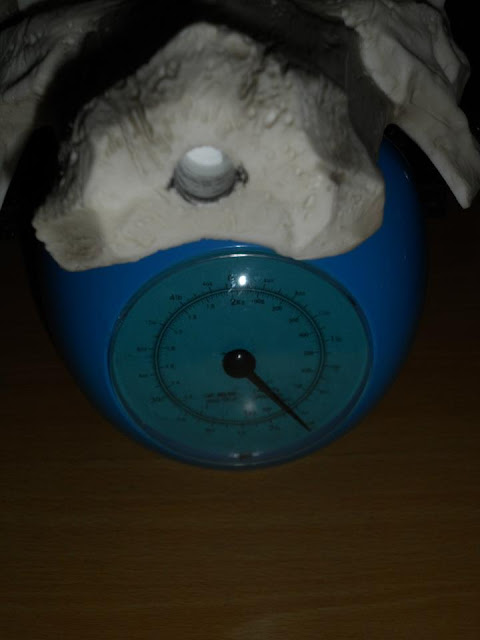 So, as you can see, the French mask is DEFINITELY heavier. 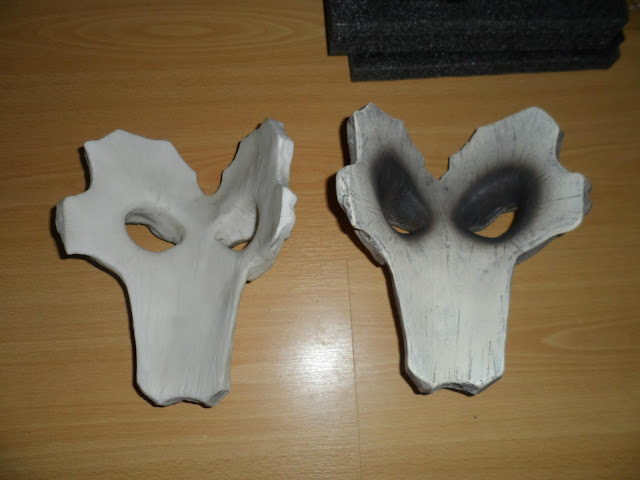 Now, for the reverse of the masks. Again, same layout, French left, UK right.
The French one has much less colour to it, but in my opinion, it looks better that way. The actual scores in the mask are enough to make it look authentic, and it really does look and feel like bone. The UK one is much darker, which is still nice, but I just can't persuade myself to favour it over the French one. Sorry! 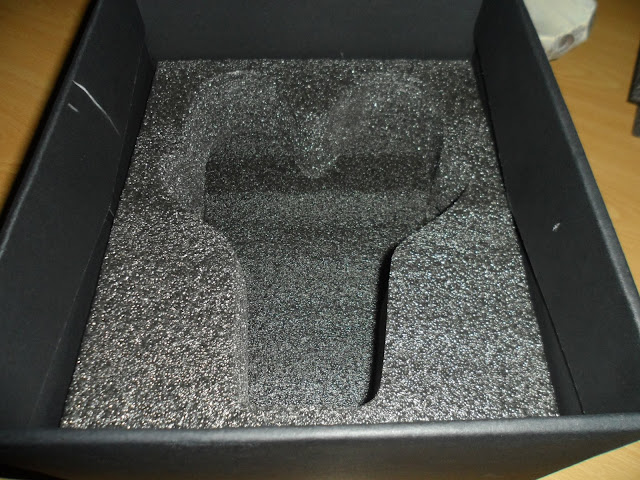 I mean, look! Look at how the French one was packaged. So much foam! They obviously care about their items. 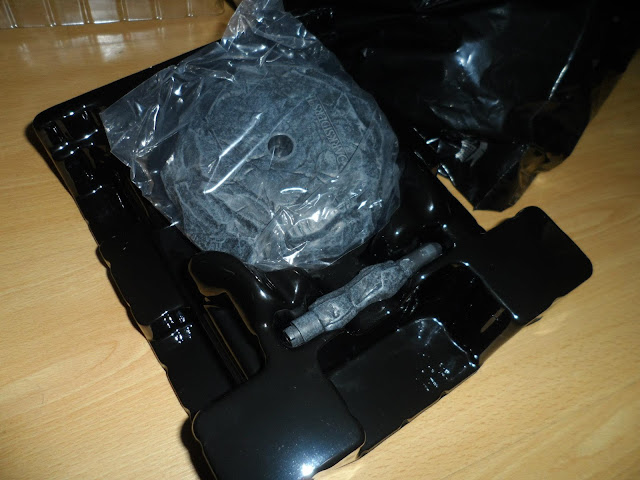 This is all that was holding the UK mask in place... well, that and the clear plastic sheet over the top. Hardly damage-proof, is it!? 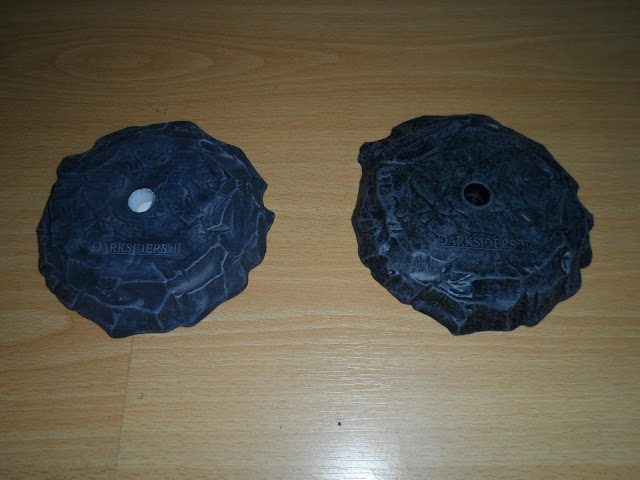 Here are the two bases, side by side. The French one is much heavier again, and also seems to be made of Resin or something, and the UK one appears to be made of hollow plastic. 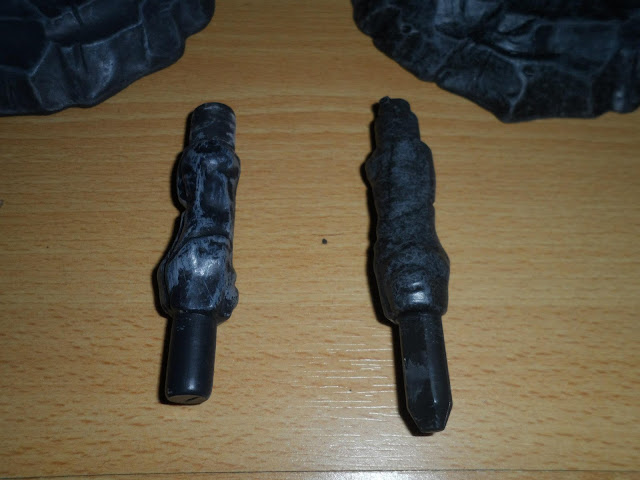 The two pegs, to hold the masks on the bases. Not much to say here really. Pretty much the same materials as their bases. 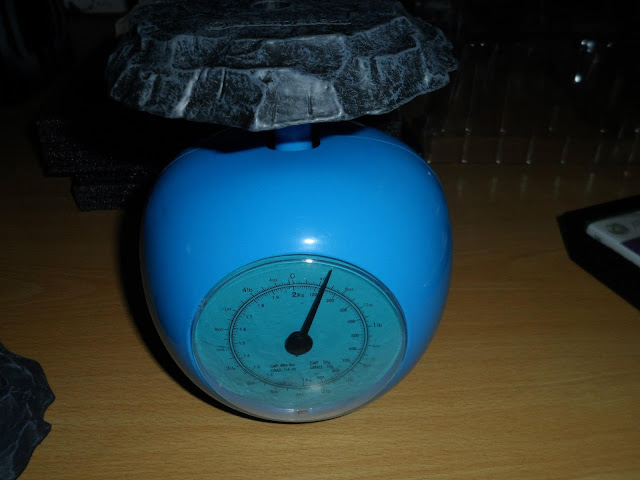 Again, weight of the UK base. 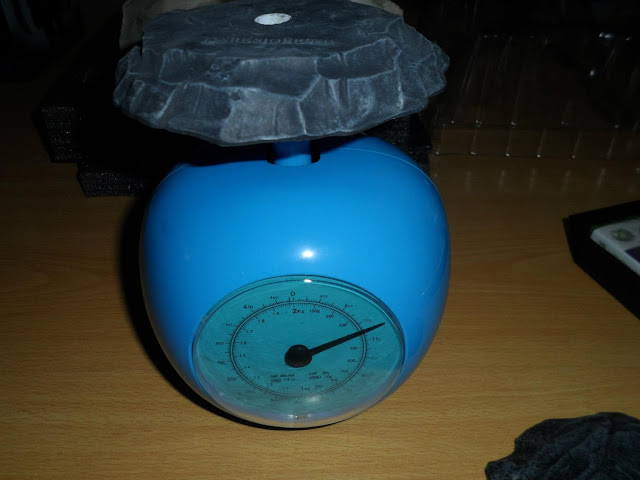 And again, much heavier French base. 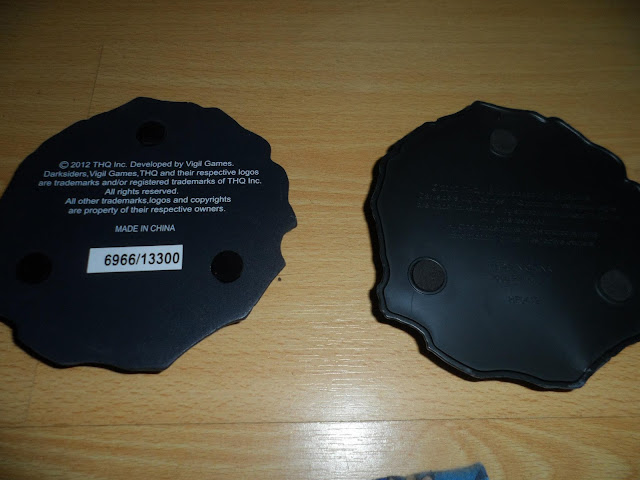 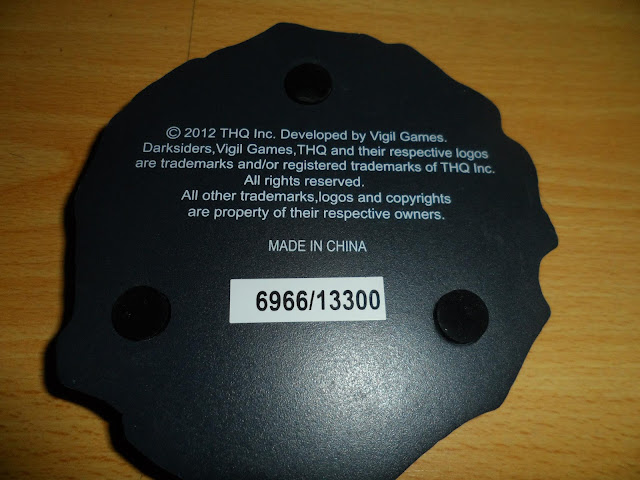 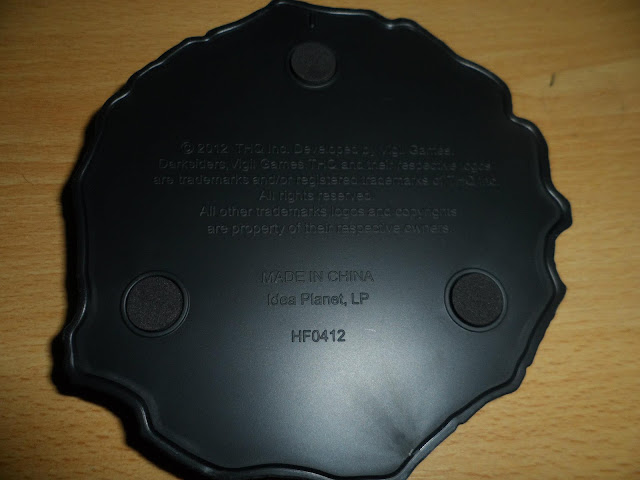 The plainer base of the UK edition. 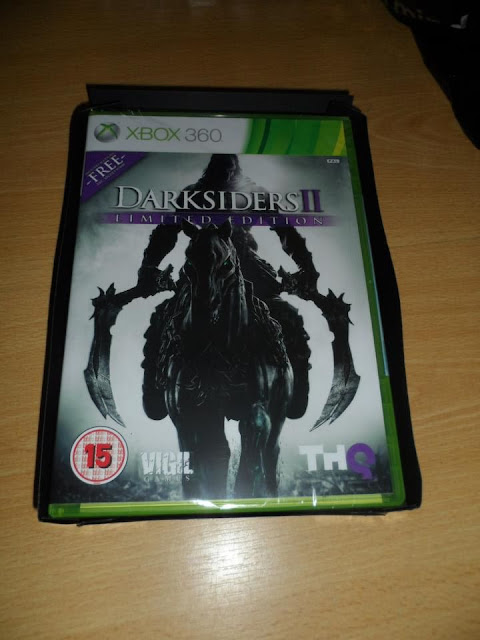 And finally, in a little carton under the black moulded plastic that housed the base and peg of the UK CE, lies the game and underneath it, the hardcover artbook (so yes, the UK have one-upped the French on this one!). 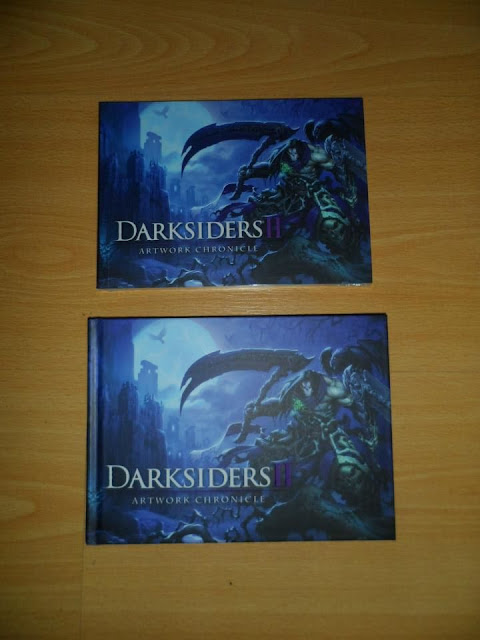 Art book comparison. Basically the same, except the UK one is hardcover (therefore marginally larger).

I hope you enjoyed my comparison shots, and I hope they at least provided some use to you.

Let me know your thoughts in the comments below!