Things have been pretty quiet in the Asylum lately. Not many deliveries to be had.

If I remember correctly, other than a copy of Persona 4 which I am forwarding on to a member on CEo, the last thing I received was the Dead Island Riptide Rigor Mortis Edition.

A surprisingly awesome edition, at that.

I don't know if you've seen it, but IGN did an unboxing of it a while ago, and no joke, I screamed at the computer screen. The guy,Greg I think, just ripped the damn thing open like someone who'd starved for a month being handed a Big Mac. I know the likes of IGN get their editions for free to unbox, whereas lowly mortals like myself have to pay for our editions ourselves (totally not jealous :P), so they obviously feel that they don't have to take care of them as they should.

The mentality that unboxers like that give off is: "I don't give a fuck", and quite frankly, it's disgusting.

Even if I was priveleged enough to have my CEs gifted to me by companies for reviewing purposes (which I'd gladly accept, *hint hint*), I would still treat them with the same degree of care as the ones I purchase with my own money.

Ripping the box open just shows no respect for the company that put the effort into making the game and the CE for it. I know I might be in the minority in this view, but wow. Don't be such an ass.

Anyway, back to the pre-rant topic.

The Dead Island Riptide Rigor Mortis Edition is a really nice edition. It is packaged in a suitcase style box, which is actually surprisingly high quality - I was actually expecting it to be a cardboard style suitcase like that of the Hangover II CE - with a cardboard box over the top (with a little slot on top for the suitcase handle to poke out).

Apologies for the truly awful photos, my photography corner is temporarily gone (haha), so had to take this pics on the floor with my phone! 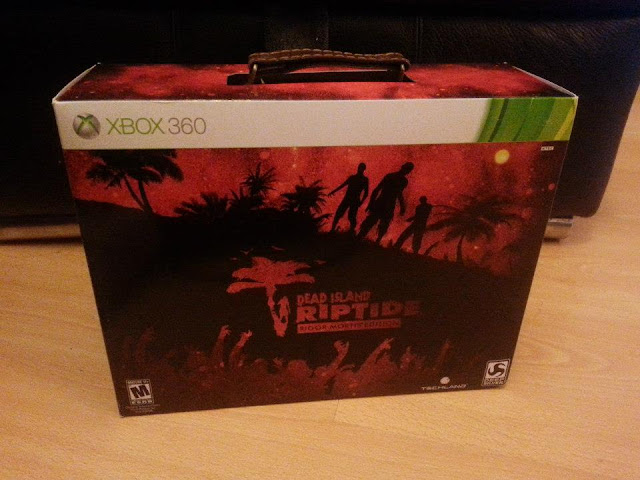 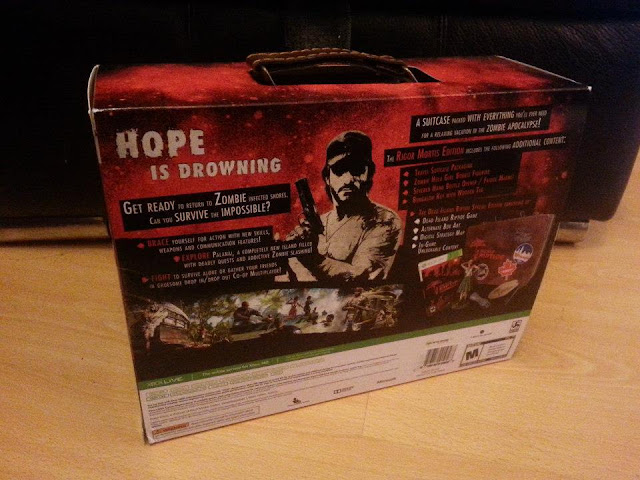 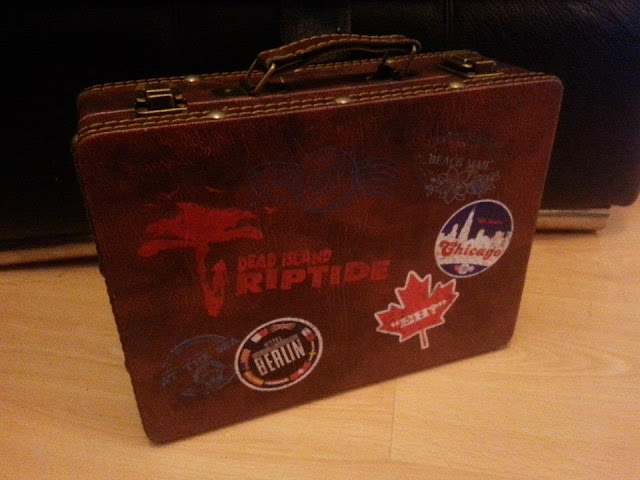 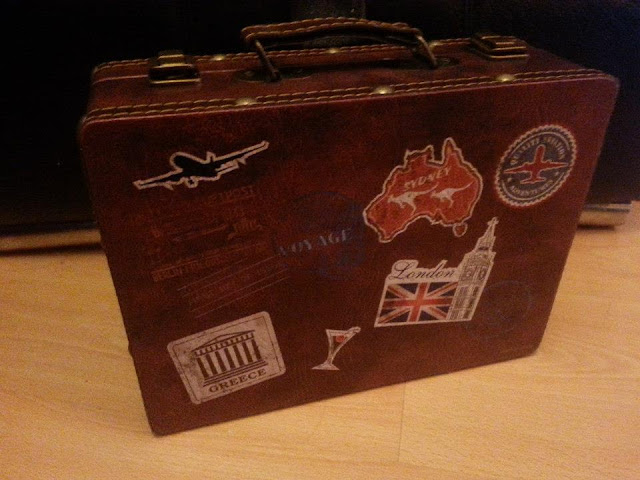 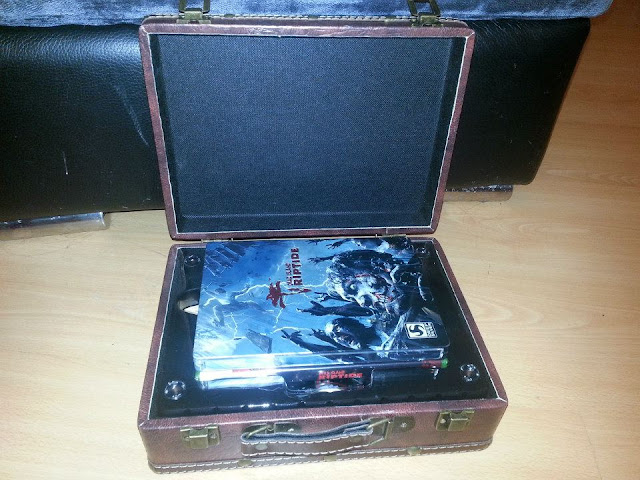 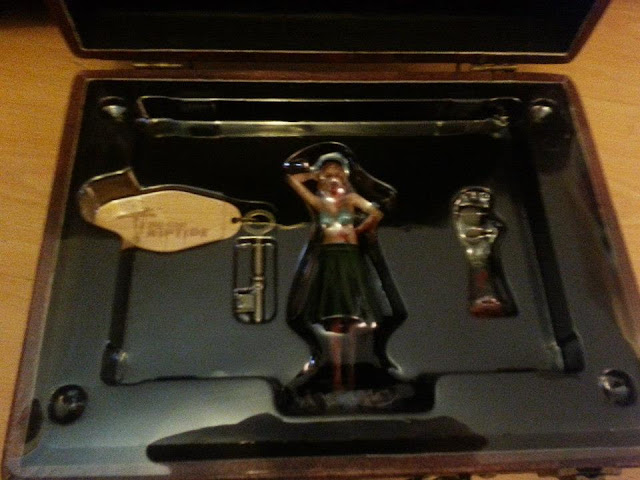 Inside, it includes the "Special Edition" of the game, which includes some DLC - and let's be honest. The Special Edition is basically the only version available on Day One. Other than that, it includes a Zombie Hula Girl, shaking her rotting corpse-ass, a zombie arm bottle opener (which also doubles as a fridge magnet) and a key with a wooden keyring, branded with the Dead Island Riptide logo. 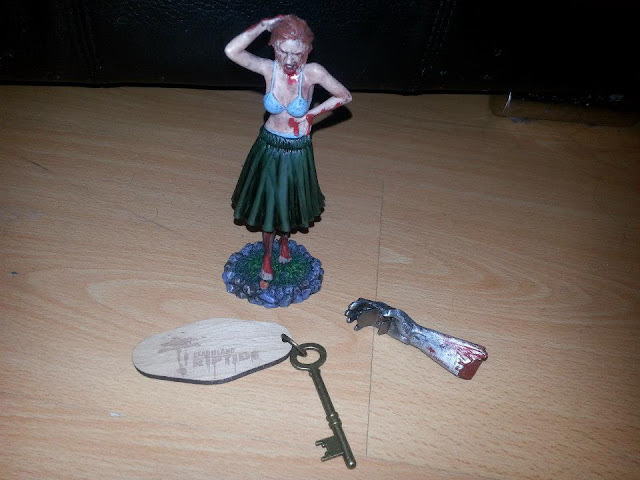 Also included in my copy, was a Steelbook case. This wasn't advertised as being included in this edition, plus I've watched countless unboxing videos where no such Steelbook was included, so after some discussion on CEo, we deduced that it was copies ordered from Amazon.com that included this Steelbook as a preorder bonus. 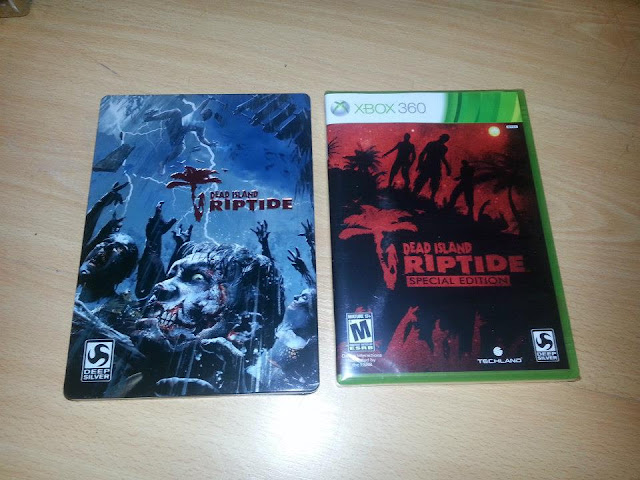 Funnily enough, it is now my third copy of that Steelbook, as I bought a sealed copy back when it was a preorder bonus from Best Buy in the US for like $5, and then a copy was included inside the Zombie Bait Edition.

Overall, the edition was definitely worth the price I paid for it (around £62~), so if you can get one at a similar price (or less), and have money to burn, I say "go for it!"

I've yet to actually play the game yet, as I've been so distracted with I Am Alive (which I recently completed and reviewed for you all), that I've barely had a chance to move onto another game - although I will want to finish Injustice: Gods Among Us before I move onto this.

Did you get the Rigor Mortis Edition? Was it better than you were expecting?