With only a few hours to go until the first of today's E3 conferences, I am giddy with anticipation.
Looking forward to this year's E3 more than the previous few E3 expos. It is officially one of my aims in life to be able to attend E3, either through writing on my own site here, or by being employed by one of the top game companies (which is another one of my aims in life *hint*).

Extremely excited about all of tonight's potential reveals. The main things that we, here in the Asylum, are hoping for are:

Just last week, Lionhead revealed that they are bringing Fable Anniversary - the original Fable (plus The Lost Chapters DLC), fully remastered, to the Xbox 360 later this year. However this hasn't quashed the rumours of another game being currently in development behind the scenes at Lionhead. Today's listing of Fable III on Xbox Live, for free to everyone with a Gold membership is adding further fuel to the fire that the next installment will be revealed tonight, and we really hope it will be.

Images taken at the Pre-E3 Xbox One reveal showed the Xbox Dashboard up on the screen. Due to everyone paying attention to what was being said, and how nothing was mentioned at the time, it was only afterwards that this caught our eye: 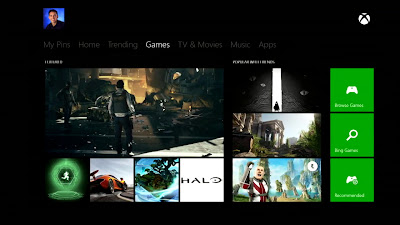 In the bottom left of the screen... is that a Crackdown orb we see?

Of course, the images displayed on the dashboard could be a mixture of stock images, real next-gen games, and gossip-fodder. But, hopefully they are all true and we'll see reveals of them all tonight - including Crackdown 3.

Also in the above image is a plain Halo logo. It goes without saying that Halo will be on the Xbox One. I mean, how could it not be? But whether that image is just to confirm that we will see Halo on it eventually, or it is a teaser to a potential E3 reveal, we're definitely hoping for both the next installment in the franchise to be revealed, as well as a HD remaster of Halo 2.

A Microsoft E3 reveal list was leaked a week or two ago, and one of the titles on the list was for Banjo-Kazooie: Grunty Land. Quite a few of the other titles on the list have either been heavily hinted at by their studios, or they've been straight-out confirmed, so we are definitely hoping that this one is true. Although, we are hoping that it will go back to the original style of game, rather than the way that Nuts & Bolts was. If this is announced tonight, even if it isn't a launch title, Allan will be a very happy man indeed, as Banjo-Kazooie is one of the main games of his childhood.

Last year saw the release of Sony's PlayStation All-Stars Battle Royale. While nowhere near as successful as the Super Smash Bros. games, it did show that not only Nintendo characters can pull off their own fighting game. Hopefully an Xbox exclusive equivalent will be revealed either tonight, or at some point in the future, as it would be great to have a "Smash Bros" style game, with all of the Xbox exclusive characters included in it. This might be a good one to wait though, as with the announcement of Xbox One gaining 15 exclusives (only including First Party ones), then that gives loads of potential new characters to choose from in a Smash Bros type setting, instead of the rather low number of characters we'd have to choose from now.

Also on the leaked list that showed us Banjo-Kazooie: Grunty Land, was a listing for Beyond Good and Evil 2. Having been hinted at previously, we're hoping that this will be shown tonight at Ubisoft's conference.

Can totally tell we're Microsoft lovers in this house, can't you!?

You can find all of tonight's E3 live streams right here:

Looks like it's gonna be a late night in the Asylum tonight!
What are you hoping to be revealed tonight?
Let me know in the comments below :)

EDIT: Apologies for the delay on the Microsoft live stream being posted - it appears there were some technical difficulties preventing it. But better late than never, eh?
at June 10, 2013