So another day, another entry to the Asylum. My mum misplaced one of the presents for us (a lanyard, so small enough to easily lose track of) and in her search for it, discovered a bundle of things tucked deep within the cupboard that she'd forgotten to wrap and give to us. So here is what there was:

So today is gonna be spent tidying up the place (as "a riot" is putting things nicely), and then when Allan is off to football, I think I might rearrange the collection room a bit... try and get more things out and on display. And try to make more space for everything too (ie: display the main parts of the editions, and put the boxes away in the cupboards).

I forgot to write on my last post (just incase anybody was confused by it) that as you could see, the wee man got Disney Infinity 2.0 stuff for both PS4 and PS3. Even though he has an Xbox One. This was purely because the figures work over all platforms, and the CE is only available for Playstation, and the toyboy pack on PS3 was cheaper than buying the Merida and Stitch figures (which it includes) separately :) Sorta same thing with Skylanders Superchargers - I thought he'd be able to use Donkey Kong on his Xbox One copy, but my brain failed me and I didn't realise that the Nintendo Skylanders are only for use on Nintendo consoles (common sense should have told me that). However, we do have a Wii U anyway so it means he can play it on both :)

Anyway, so I will get some pics up today, most likely just basic pics of everything, nothing too in-depth, as it will just be a case of taking pictures in between rearranging the collection, and tidying. But if there's anything in particular that you'd really like to see, you know what to do...

Let me know in the comments below!

Yesterday was the 25th of December. Christmas Day. And we were spoiled rotten.

I can't believe how much stuff we've gotten this year - well, I can, it's sitting right in front of me - but holy crap, there is a lot. So much in fact, that the stuff from my parents, my mum split and gave us half to open at ours on Christmas morning, as my dad would've freaked had he seen it all.

She likes to try and get stuff all throughout the year so as when December rolls around, she's basically done. However this year, she did not keep track of what has been bought at all (neither did I), which then resulted in her getting the shock of her life when she brought it out the various cupboards.

And to which also resulted in a "this is not happening next year" to me, haha. Not that I was expecting it at all, anyway.

Sooo, this post will serve as our latest "Entries to the Asylum" post, however there are a couple of things that have been received over the past few weeks, so some dates are a little fuzzy, to say the least! (Also, some things may be missing, if so, I will add them in as and when I remember, lol)


The wee man was also spoiled rotten, and of his stuff, what he got that is game related, etc, was:

aaaand! I got my Secret Santa gift from over at CE.org!  It is the Rise of the Tomb Raider steelcase (w/ envelope) and replica of Lara's necklace in a little pouch, from the Rise of the Tomb Raider CE. I definitely need to pick up that CE at some point as unfortunately I didn't have the funds on release and didn't get it, but having two pieces of it just makes me want it more!

I absolutely love it, and my Secret Santa certainly knows me well to get me something from Tomb Raider as I enjoyed the game so much! So thank you to my SS! :D

I'd also really like to thank everyone that has helped me acquire everything above over the last however many months, it was brutal receiving them only for them to be put away into hiding for so long until Christmas, but it's worth it to now finally have them in the Asylum!

I will post pics of all of the above very soon, and if there's anything in particular you guys would like to see me unbox, then feel free to let me know in the comments below!

Hey guys!
Sorry, we've been totally ill with the flu lately. Actually got a few videos recorded for you but they were actually ruined due to my almost non-existent voice, and shaky cam due to constant coughing. So, as usual, something has gotten in the way. So, again, I'm really sorry. We were all starting to get better, the boom. Ill again.

Anyway, we are still in the middle of decorating, too. The house will finally be done (minus two of our cupboards: the "stable" and the "cubby hole") on Tuesday, as that is when we are due to have our hallway carpets fitted, and flooring fitted in the kitchen too, so we are going to have to finish painting before then, so we will be caught up with that over the next couple of days.

But, on Saturday we are having people over for the Jose Aldo v Conor McGregor fight, so I am aiming to get a few videos done during the day then, before people arrive.

Okay, so I'm rambling now. The point of this post was to tell you what new entries we've had in the Asylum over the last couple of days.

First of all, we had a steelbook arrive last week at some point. Sadly I cannot remember when:

That can be found here.

These can be found here and here, respectively. Great prices for them too, although we did order Deadman Wonderland Complete Series along with them, but that has yet to materialize.

Both of these editions came from EBGames in Australia, assisted by a great member over at CE.org, Dreamcazman (woo!). It was due to be delivered on Tuesday, however instead of attempting delivery, Parcelforce instead just left it at the PO and updated tracking to say "Addressee unavailable, notified..." despite them never coming to our door or leaving a collection slip. Grr,

So what things have you guys received recently?
Let us know in the comments below!

It has been revealed that the previously announced Limited Edition Pikachu plush from Build-a-Bear Workshop, that was due to drop in 2016 has been brought forward to be released later this month!

I honestly don't care what anyone thinks, I am super excited about this.

I mean, look at this adorable little bastard! 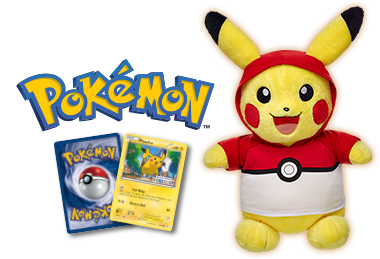 He's 15in tall, and comes with an exclusive Trading Card, and a Pokéball hoodie. And if you preorder him online (which sadly, it now looks like they're sold out online!), he also comes with a 6in1 Pikachu voice box, and a Charizard hoodie! 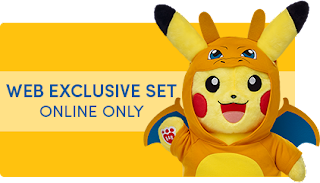 How freaking cute is that!?

So being the huuuuge Pokémon fan that I am, as soon as I found out, I preordered him. Well, my first instinct was "aw maaan" because I expected that it was only US stores that had him, but no, UK got him too! And then my second instinct was "waaaahh" because I cannot afford to drop £45 + shipping on him right now, but luckily payment is to be taken on dispatch, so yaaaaaaay! 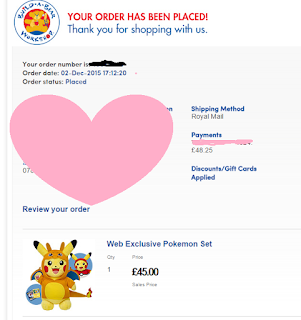 Did any of you guys preorder one before they disappeared?
Let us know in the comments below!