It's now 1am, on Friday as I write this [EDIT: Now almost 1pm as I post it, as I managed to fall asleep, well done me!]. Purely as it took so long to get the kids to sleep and then get on here to write this... But as I haven't been to sleep yet, in my mind it is still Thursday. And it's still Thursday in the US, so all is well.

Anyway, yesterday we finally had the Uncovered: Final Fantasy XV event, and boy, were we treated to a lot of stuff! Such as this amazing new trailer below:

Showing off the brilliant new combat, and the fantastic cover of "Stand By Me", done by Florence Welch, of Florence and the Machine, just really blew me away.

We were also shown a new 5-episode Anime series, following Noctis and his friends, which will be available free on Youtube in the run up to release; the first episode of which is available now. A sixth episode will also be available exclusively for fans who purchase the Ultimate Collector's Edition of the game (more details down below!)

And of course, also revealed was the feature-length CG movie that will tie in with Final Fantasy XV, but showing things from the perspective of King Regis, Noctis' father. Kingsglaive: Final Fantasy XV will be included (in bluray format) within both the Deluxe and Ultimate Collector's Editions of the game.

Three versions of the game will be able on launch (and preorder, now). The base game available on launch, the Day One Edition, as shown below will include a piece of bonus Day One content: the legendary Masamune sword: 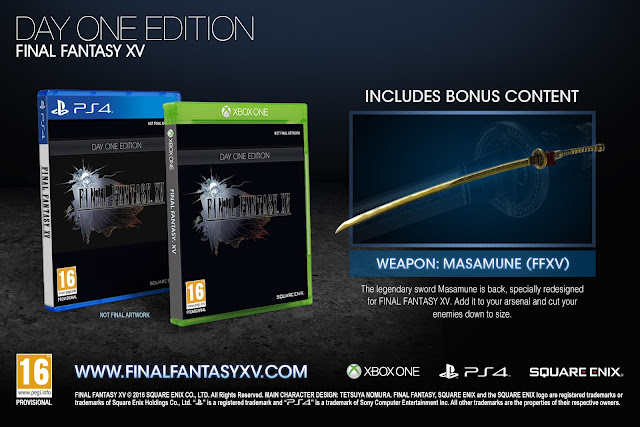 The next tier is the Deluxe Edition, which in addition to the game itself, and the Masamune DLC, includes:

Steelbook in this edition is exclusive to this edition, which is a little disappointing if you're going for the Ultimate Edition, as then you'll need to buy both in order to get all of the steels. 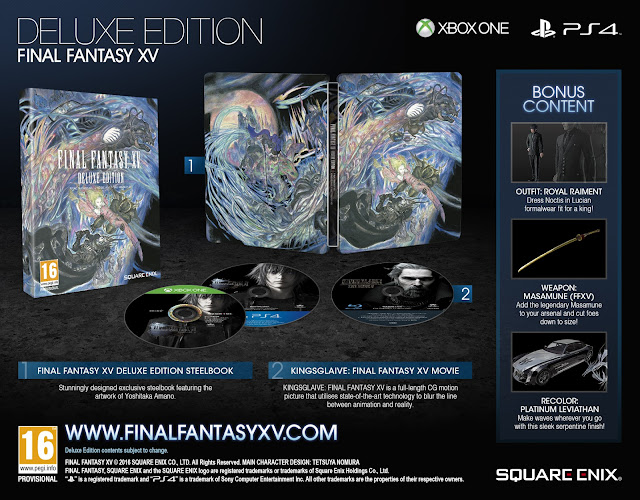 And last, but sure as hell not least, we have this beauty.

The Ultimate Collector's Edition is just amazing. Expensive at the price of £189.99, but it is packed with stuff. Included, alongside the game (and all of the previously mentioned bonus DLC) are:

And here it is, shown below: 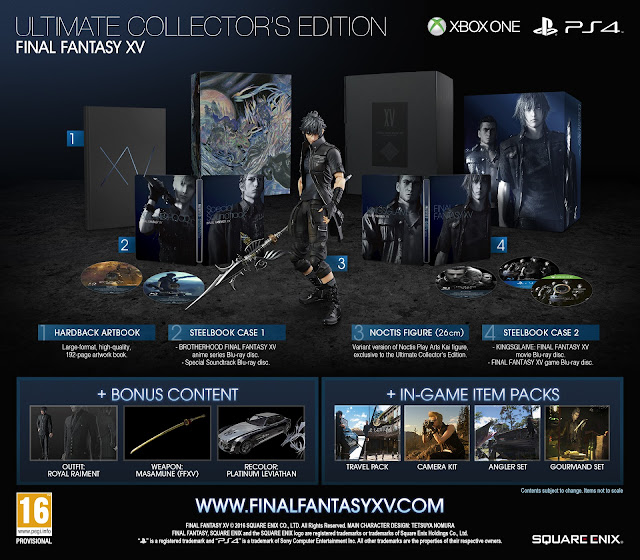 Exclusive to the Square Enix Store, priced at £189.99, this one has already unfortunately sold out pretty much everywhere. Luckily I managed to nab one when it was available, otherwise I could imagine this being one that will go for ridiculous amounts later on (especially since it is limited to only 30,000 units worldwide). It's definitely an expensive edition, but it certainly is jam-packed with stuff. And considering the price that some PAK figures retail for alone, really makes the pricing make sense here.

The PAK figure of Noctis is beautiful. It is exclusive to this edition, and we're really looking forward to getting our hands on it.

You can also play the demo for Final Fantasy XV now! It's available for free on the Xbox Live and Playstation Network stores. Called Platinum Demo, it's not a demo in the traditional sense, where you get an excerpt of the game to play, but it's a seperate little min-story, in Noctis' mind, where you play him as a young boy. Designed more as a feeler for the controls of the game, as well as the combat, it's a nice little introduction to the new fighting, as opposed to the older turn-based combat from the previous games.


Go get that Demo played now! Releasing on September 30th this year, Final Fantasy XV sure does look like it's gonna be amazing, and definitely one you don't want to miss.

Did you manage to get a preorder in for the Ultimate Collector's Edition?
What are your thoughts about it?

Let us know in the comments below!