Bethesda's conference, like last year's, was great. We were a little off on our predictions - for instance, we didn't believe the Quake rumours - but we got to see a lot of fantastic footage, and we were very excited to see the return of Prey (albeit in a new form from what we'd expected).

What we got to see of Dishonored 2 was fantastic. It was one of the most highly-anticipated games shown, as we all knew they'd show more, and we were all desperate to see it.

The new game looks great, and with the option to play as Corvo or Emily it means you get the added benefit of a second playthrough as the other character.

Gameplay mechanics look improved, with a lot more of the vertical space used, allowing climbing and exploration throughout the rooftops as well as the streets and alleys below.

A Collector's Edition was also revealed, stated to be in very limited quantities. Shown below, it contains an awesome selection of stuff, and at £79.99 here in the UK - exclusively at GAME - it's very reasonably priced, too. 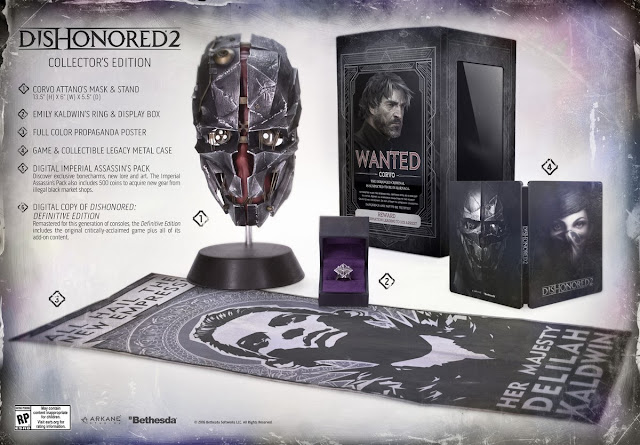 So yeah, very reasonable price for all that content! Here's hoping it's all of a fairly decent quality, too. And you don't need to ask, yes we preordered it :)

This looked fantastic! A few years ago, the Prey sequel was cancelled, and it seems that Bethesda have reimagined it into an awesome looking first person sci-fi action game (with an added psychological twist), with Arkane Studios at the helm (yep, the same team that did Dishonored, so this should definitely be great).


It just looks so good, and I really can't wait for it. It's expected for release next year on PC, Xbox One and PS4, so very excited for that.

This one was revealed at much surprise to us here in the Asylum. Although there had been rumours of its possible reveal, we didn't believe it. Opting to believe (and hope) for a second Evil Within game instead, we were a little disappointed to see that wasn't the case, although the game admittedly does look good.

Bethesda's card game will have a single player campaign available to play. Seemingly, you can build up quite a collection of cards through playing the campaign. A beta is up and running, for which you can sign up here.


Whilst we're not really huge fans of games like this, I leave my judgement until I've played it (so naturally, have signed up for the beta).

Something that many people were excited for, Skyrim being remastered! The graphics are superb, and having given up on it a long time ago (whilst still wanting to get back into it), this is the perfect thing for us here in the Asylum.

I've been wanting to play it all for a while now, but could never summon up the effort to set up the 360 again, nor could I justify the time I'd have to spend on it, when I've already got a huuuuge backlog sitting there right now. However, with a remaster on current-gen consoles, this is just the push I need, since I won't have to bother with the 360. And with only a few short months till release, it'll no doubt be a top-seller over the holiday period.

Well, there were a lot of big announcements at E3, but a few smaller ones were released too. Fallout 4  will be getting more DLC (with the first, named Contraptions, dropping on Tuesday) Fallout Shelter is getting a bunch of updates (as well as a PC release). Bethesda is going into the VR business with Fallout 4 and Doom getting VR releases for the HTC Vive. The Elder Scrolls Online is getting an update to add in more content with the Dark Brotherhood DLC, and also to remove the level restrictions, allowing everyone to access everywhere. Oh, and for some reason they also announced a new Blink-182 album, who were there to perform after the conference.

Yeah, we're not entirely sure why, either.

So what did you enjoy most about Bethesda's conference?
Let us know in the comments below!