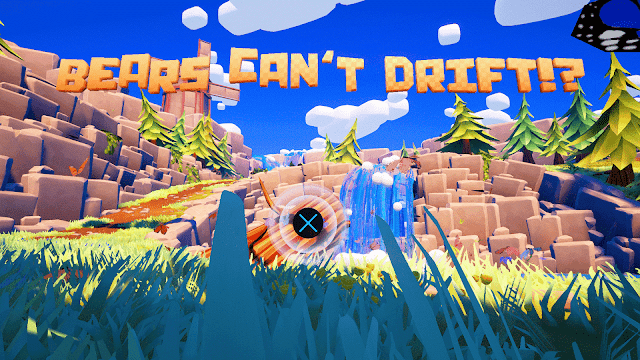 From the moment you start up the game, you can tell it's something different. With no main menu, which is common in, well... pretty much every game out there, particularly when having the need to select difficulty, you see the ingenuity of incorporating the menu-style options into a playable selection with three branching roads leading to the three difficulty levels: straight on for the easiest, left for the standard, or "Normal" difficulty, and a steep drop to the right for Hard. 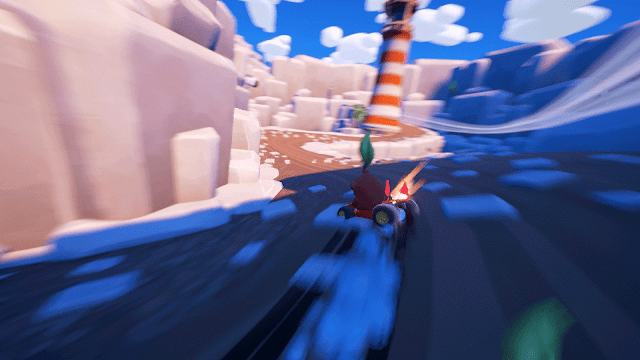 There are a few environments and tracks for you to race around. each including game modes as well, such as Time Trials and a "Picnic" mode, where you have to collect as much food as you can - yum! Unfortunately, these races feel very bog-standard, and the lack of a directional arrow is downright infuriating, as you will no doubt get lost countless times (resulting in a poop score) before you finally learn the layout. The hub worlds are fairly bland, with only a few different types to choose from, and the tracks within them being very samey, I feel like a lot more thought could have gone into the designs to make them really stand out and be memorable.

The art style of the game is absolutely beautiful, with bright colours and pretty scenery. There are also a variety of weapons, like you would normally see in Mario Kart and such, only they can be multipled for different effects which can be quite cool. These weapons are your usual types, so I wish there was a bit more of a choice, but the ability to combo them does help. Although, I do wish there was a way to combine weapons of different types for weird and wacky effects. The drifting, as mentioned in the name can be frustrating at times, often leading to me careering off the edge of the track, but that's quite possibly just a by-product of me not being the greatest at cart-racers. Allan on the other hand is pretty good at them, but he also tends to drift off cliffs and such, making me think that possibly this could just be doing with some tweaking. I do really like the motion blur effect when you drift though, as it just adds to the enjoyment when you do successfully drift round a corner. Falling off the track is usually an instant killer to a good run, as one wrongly timed drift, or misjudged angle and you'll be off, and by the time you get pinged back to the track, you'll often find you're now at least 2 or 3 places behind. And coupled with the confusing track layouts, this can easily make you want to give up.

With a cute bunch of playable characters to choose from, you'll definitely end up with a favourite. Allan has a few favourites: the robot, the crash test dummy and the skeleton bear, whereas I on the other hand, am all about the panda. You can also modify the colour of your cart, with mine usually always being purple, but the ability to actually choose from different carts would have been a good addition. The music is sometimes boring, which is really quite a disappointment, as good music could really have helped this game, especially considering how amazing the soundtracks in other cart-racers are.

The game doesn't hold your hand at all, which at times I like, but it really doesn't explain much in terms of game mechanics at all, such as the room with a delete button in the middle of it, I presume it's to delete your save, but whyyyy? It tries to be simplistic, but this really ends up being more over-complicated than simple, with you furiously attempting to figure out how to do anything. 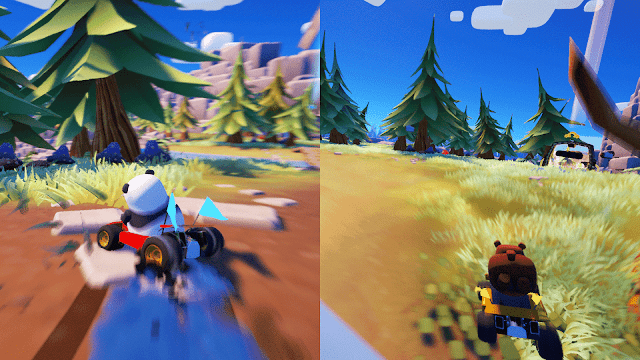 The game doesn't bode too well for playing alone, which does let it down a bit as Mario Kart, etc are very successful even in single player, but BCD!? is definitely designed primarily as a fun multiplayer game. My son loves it, and it has proved to be a good game to play with him. Overall, whilst it does have a few let-downs, it is still a fun game to play, especially when you've got kids.

Have you played BCD!? What were your thoughts?
Let us know in the comments below!