Tuesday 22nd November 2016.
*These are all technically the wee man's, but including them for the sake of them being in the shelves, etc.

Quite a lot has been received since the last Entries post :) There should also have been Pokémon Sun and Moon Fan Editions (w/ preorder bonus figurines) however they have yet to materialize in the post, grr.

What new stuff have you gotten recently?
Let us know in the comments below!

In The Bug Butcher, by Austrian developers Awfully Nice Studios (in conjunction with Triangle Studios for the console releases), you play as an exterminator called Harry who is tasked to destroy the hordes of alien bugs that are taking over the ship. The gameplay is fairly straightforward, but massively fun.

The game is able to be played co-operatively, which is a great inclusion, as this has been a fantastic game to play with our son, who enjoys - and is surprisingly good at - killing all of the weird bugs and blobs that head his way. The objective is simple, clear out each room of all of the bugs that are infesting it. As you wipe out a wave, more will come until the room is literally covered, and you (and a friend, if playing co-op), have to shoot them all, whilst dashing side to side to dodge them. See, these bugs don't just fill up the room, they like to bounce around, attempting to squish you. So as the waves get faster, and with more bugs spawning, this can be quite panic-inducing, but nevertheless fun. 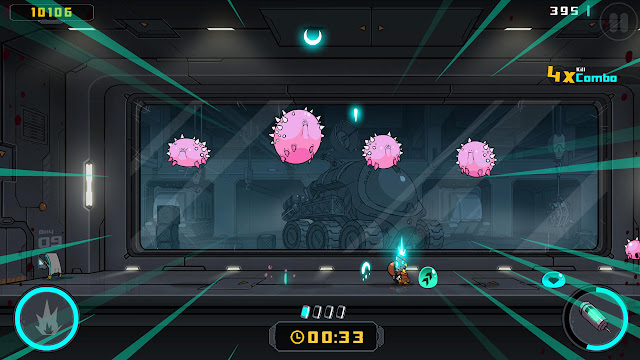 As well as killing the bugs, you often have to rescue the little scientist guy who is accompanying you. He doesn't do anything really, in the sense of fighting back. His role in the game is to occasionally give you power ups, which can alter your weapon for a short time, giving you faster rate of fire, stronger weapons, etc. Often, spider looking enemies will spawn with big grabby tentacles that will snatch your little scientist friend, trying to take him away - these need to be dealt with straight away, as losing him will end the run. 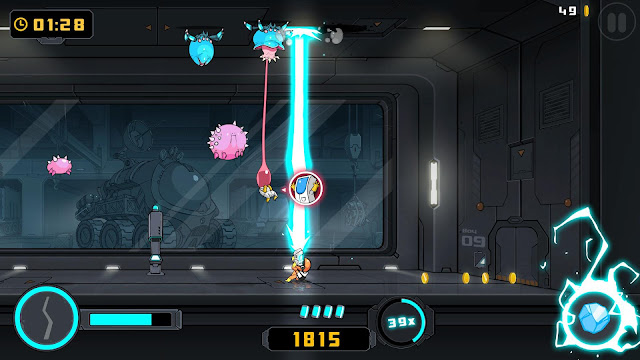 Three difficulties exist: Easy, Medium and Hard. The difference between these is the number of bars of health you have available to you, with Hard being just a single bar, and this is cleverly, and humourously depicted in you, Harry, wearing nothing but your pants. No armor, whatsoever. Nada. Two game modes exist, so as well as Arcade Mode, which is essentially your Story Mode, we also have Panic Mode, which is pretty much just a horde mode, but an aptly titled one. Both are available in the main menu from the start, but Arcade is the usual one we play, especially if playing with our son. The bonus for playing Panic Mode in co-op, is that if you get downed, your partner-in-butchering can revive you. 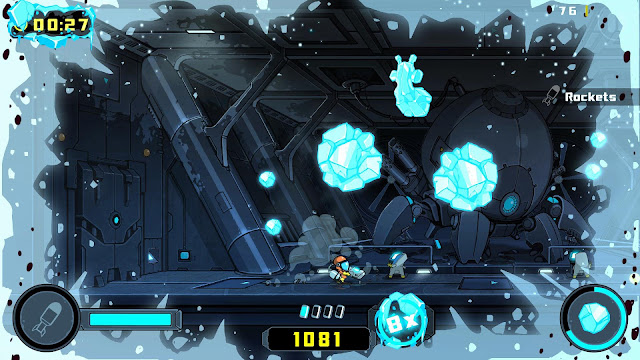 The game is fun, fast-paced and interesting, with a variety of upgradeable weapons in your arsenal, a cute art style - that still manages to be gory when those bugs explode, 30 levels that feel and play differently as you progress due to your upgraded weapons and different enemies, and a Leaderboard system, to give yourself the bragging rights against your friends - providing you're the best, of course.

And at only £7.99 on the Xbox Store, it's cheap and cheerful, which makes it even better that it's a whole load of fun. So we decided to give The Bug Butcher a solid 8/10.

Have you played The Bug Butcher? What did you think about it?
Let us know in the comments below!

Hi guys, sorry for being AWOL for quite some time again. I was unfortunately suffering with pneumonia, and am currently still recovering. Don't worry though, it was a mild case, but still put me out of action for a bit (and my voice still hasn't returned to normal yet, which is pretty damn frustrating when your work revolves around speaking!).

Things have been pretty busy here in the Asylum, between me being ill, the kids being ill a couple of times whilst I was ill, and Allan having kidney stones and requiring surgery all fairly recently, we've been a little bit preoccupied.

But things have all settled down again, so you can expect quite a few posts shortly. Starting with an Entries to the Asylum post, for everything that has been received since the last one, as well as a few posts discussing things I've been thinking about lately, and of course some reviews!

So please keep checking back, and you'll see all our new stuff shortly!

What other things would you like to see soon?
Let us know in the comments below!

Like. So fucking hard. It is easily the hardest game I've played this year, and that's not necessarily a bad thing. Some people thrive on difficulty in games, with the extreme frustration being a driving factor to push them through the game. I can be like that with some games, however Rive really did make me question my own sanity at times. 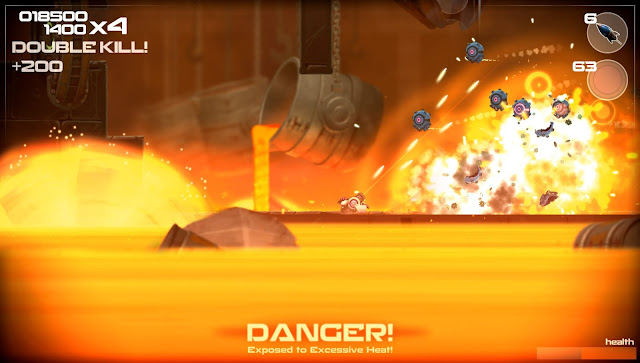 A 2D side-scrolling platformer/twin-stick shooter hybrid, Rive has you play as Roughshot, a frequently-pop-referencing space-scavenger who can hack into enemies, causing them to work against themselves, and a whoooole bunch of other cool stuff. With 360-degree shooting, , the game is just about as bullet-hellish as you can imagine, with a tonne of trial and error needed to progress, however this constant barrage of death does prove to make you better, albeit whilst tearing your hair out in the process, but this can be a fantastic incentive - just the relief of completing a particularly difficult part.

Rive makes it easy for you to figure out what needs to be done, but the actual process of doing these things is where the game gets hard. And when you finally pull it off, something else often ends up killing you immediately after. And then the whole process starts over. As I've said before, this can be horrifically frustrating, but also really pushes you to your limits, making you react faster and think more about your plan of attack. The art design too, is fresh and great to look at, and the weapon upgrades and gadgets that you receive as you progress in the game make taking down enemies more interesting and fun as you go along. 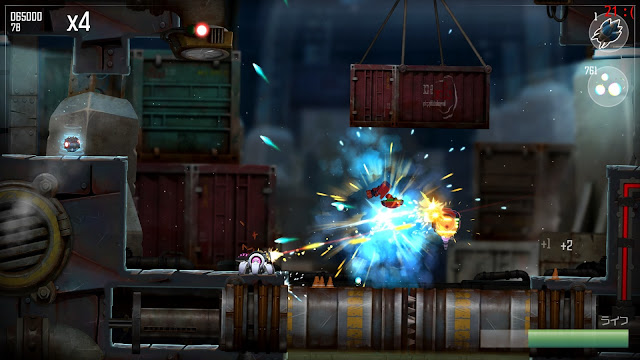 It's a good game, but it is marred slightly by the difficulty, but again, if that's your thing, then you'll totally love Rive. If schmups aren't your thing, then I'm afraid Rive probably ain't the game for you, but I would recommend trying it out a little, at least just to see how you fare with the difficulty. Plus, it's fairly cheap too, at only £7.99 currently on the UK PS Store - EIGHT QUID - so even if you end up not being a massive fan, it won't be too much of a loss, and with this being the developer's last game, it would be nice for it to do well sales-wise.

Two Tribes, the Dutch indie-game developers behind Rive have now officially closed their doors as of Rive's release. Not through poor sales of the game itself, or company buy-out, but instead voluntarily shutting up shop. After struggling with the release of their previous game, Toki Tori 2, and filing for bankruptcy in early 2014, I guess Two Tribes figured best to end on the high of the release of a game, rather than drag things out any longer. It's always sad to see a developer close their doors, but better to do it this way than to see them go as so many have before. 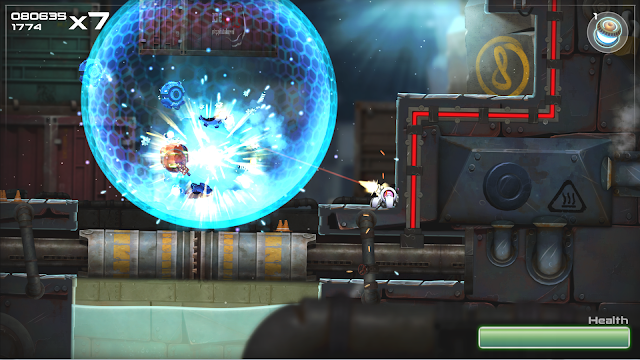 What did you think of Rive?
Let us know in the comments below!

A few entries from the past few days.

Yaaay. So happy with the things that have arrived recently. Especially WoFF as I was panicking about that due to Square Enix Store cancelling my order and refusing to reinstate it, but I managed to get it in the end!

What have you got recently?
Let us know in the comments below!

SNK's King of Fighters XIV is a fantastic return to the KOF series for both veteran players and fans, but to gather in new fans, too. The art style has shifted from the 2D characters of previous releases, to 3D character models on a platform, on a 2D backdrop. It's a nice change in aesthetic, but still retains enough of the King of Fighters feel not to disgruntle too many diehard fans of the originals. 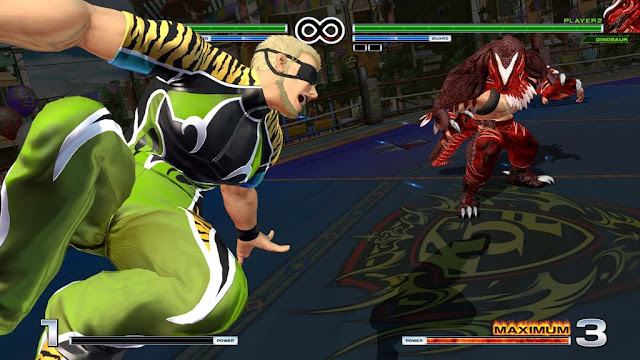 Exclusively for the PS4, I feel that opening it up to Xbox One owners would have been a good idea, especially considering XIII's release for 360 - and the fact it's been six years since then - giving more people a chance to play. Another thing to consider is the popularity versus other fighting games, sales did reasonably well for KOF XIV, but compared to games like Street Fighter and Mortal Kombat, it's practically nothing. Which, in all honesty, is a shame as King of Fighters XIV is definitely not a bad game by any means. 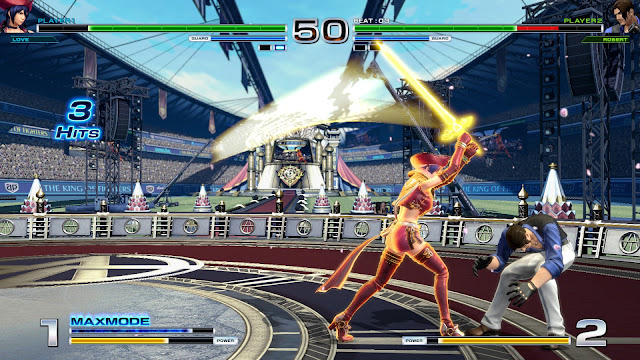 With an impressive array of fighting styles between all of the characters, this can prove selecting a team a tough choice. Characters are displayed in their little trios, if you want to play them with their usual teams, but of course you have the freedom to pick who you want, also. With so many characters to choose from, you're also bound to have a few favourites, although mastering them may take quite some time as the game does have quite a sharp difficulty spike, especially as you have to master three characters at once, rather than just the usual single character playstyle of other fighting games.

Fighting is beautiful, with the characters, as previously mentioned, now in 3D. The colours are bright and really make this game a pleasure to look at. The characters are greatly varied in both appearance and in ability, and with both series originals and newbies - this allows both old and new players to find something new to marvel over. And the music, whilst not groundbreaking, was certainly fun enough to keep me in the fighting mood. 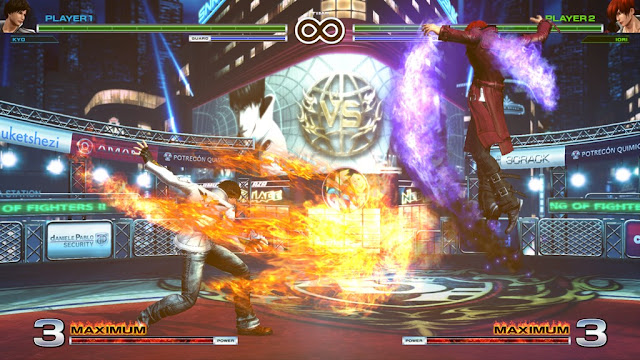 I really enjoyed King of Fighters XIV, albeit struggling a little with the difficulty of pulling off some of the better moves, but regardless of that, it is still a very enjoyable game to play. In the end, we came to the agreement that KoF XIV gets a well deserved 8.5/10.

Have you played King of Fighters XIV?
What did you think of it? Let us know in the comments below!

My apologies guys, wrote this out a few days ago and forgot to publish, so here is it (at last) with another couple of updates added on!

I feel like there are a couple of things received since the last Entries post that I haven't written here, but I can't think what they are, so those will be added later if a) they exist, and b) I remember them! I also have a few reviews already written that just need some tweaking (as well as some pictures to be added), so those will go up at some point today also.

What new things have you got recently?
Let us know in the comments below!