Asylum Reviews: Friday the 13th: The Game [Xbox One].

So this has a bit of a cheek to be classed under the Asylum Reviews title, as it's more of a review in progress, shall we say? But here goes, anyway... 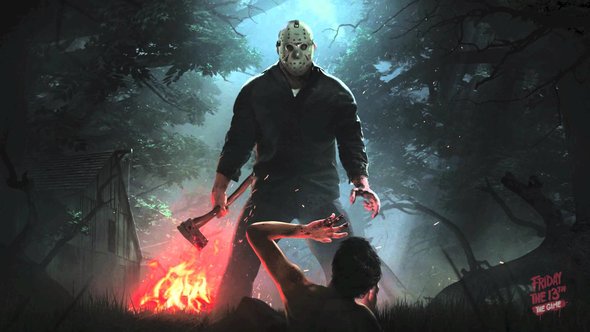 Gun Media and Illfonic's little horror baby Friday the 13th: The Game was released on Xbox One, PS4 and PC last Friday; sadly not the 13th, but a Friday nonetheless. It has been subjected to many a harsh criticism since its launch from gamers and reviewers alike, including myself. However, it does have redeeming qualities that I hope will outshine the shortcomings and ultimately lead to a fully functional game once all the bugs are patched.

Now, I'm reviewing from the Xbox One perspective which has already been confirmed as having some of the worst problems due to a missing day one patch, so bear this in mind whilst reading.

Let's start off with matchmaking. Holy fuck. The matchmaking has been awful so far. Repeatedly I have been waiting 40+ minutes, alternating between watching the little "searching" bar twirl away, and staring at shitty Buzzfeed articles waiting to be put into a game, only to be forced out of the game entirely and shoved back to the Xbox Dashboard and then having to repeat the process all over again. And believe me, this can go on for hours - I'm a stubborn person, and impatient to boot.

When I finally got into a game, I thoroughly enjoyed it. A few little mishaps here and there, such as getting stuck against rocks and/or fences when using Jason's weird zoom all over the fucking place ability, and running alongside walls, kinda half inside them as the counselors, but overall I was having fun, and actually managing to chat with other players who weren't full blown dicks for a change! :)

A few games later, whilst running away from Jason, I ended up stuck on a little rock at the left of one of the bridges. The rock is lower than the others, which allowed me to drop onto it, but it was too high to allow me to then get back up, or to drop down further into the water below. Now, this was pretty hilarious, as I sat there for a good while before anyone started coming my way. There I am, crouched down in this little spot, waiting to be put out of my misery.

A counselor comes running towards the bridge, shrieking in fear from Jason, quickly closing in on them. A quick scuffle later, and the counselor is dead. I'm sure to be next. But no, Jason turns and walks away. Part of me was super excited that I'd survived, but also kinda wondering if my end would ever come. Even if the timer ran out, I wouldn't be able to escape via one of the exits, so I'd lose regardless... but here comes Jason to slay me. Another minor issue; I'm too low for him to hit, so we just awkwardly bop around for a few minutes until he grabs me and I zapped from being crouched down to being thrust into the air with a crushed windpipe. I recorded that little snippet of gameplay, after all, it was the first glitch I'd properly come across in F13 - at least first that had been an actual issue. 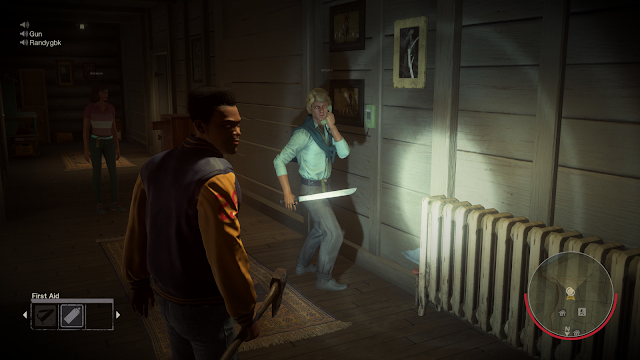 Later, Allan played a few games and got a whole tonne more problems than me, ranging from repeatedly trying to pick up an axe - but constantly swapping it with a bat and being endlessly unable to ever stick with the axe, floating around the map, Jason smashing down a wall only to continue swinging his axe after the wall had broken (and then instantly ending up at another breakable wall at another part of the building), and the magic trick he somehow pulled off... Jason, hot on his tail, ready to kill him, and suddenly he teleported into the house he'd been in just a few moments prior (causing Jason to lose track of him entirely).

These issues frustrated the hell out of Allan, and whilst we were in complete and utter disagreement over the game (most likely due to the difference in issues we'd experienced), I could understand how irritated he was with the lack of ability to play. The fact that we contributed $420 towards the game probably didn't help its case either (especially as physical rewards are not yet delivered) - but the thought of our stuff being added to the Asylum soon is keeping him going, particularly because it's signed by everyone :)

It certainly is a fun game when it works (and I actually can't decide who I like to play more; Jason or the counselors), but sadly the problems right now are causing it to work far less often than it should. A patch has just been added to Xbox, so I'm hoping that will resolve most of the issues to allow us to actually get some decent games going. And of course, this summer we're due to get a Single Player, so I'm really looking forward to how that turns out.

As of right now however, we'd have to rate it a 6.5/10. Once the issues are resolved and the Single Player is added, I'll come back to this title and re-review it, to see if we get an improvement (and I sure hope we do!)

Have you played Friday the 13th: The Game? What did you think of it?
Let us know in the comments below!