The Danganronpa series has always intrigued me. The instantly recognizable character Monokuma always made me want to give the games a shot, to see what they were all about, but I never got round to it (got too many games to play, I tell ya!). So when I had the chance to play Danganronpa V3: Killing Harmony, I was excited.

It plays as a visual novel, a favourite of the Japanese market, and there's lots of information to take in within the game. The robotic bears, Monokuma and his Monokubs (five child-like miniature robot bears) have captured 16 students known as Ultimates (for their individual abilities that they are best at, which include things from Cosplay, to Detective, to Entomology) to have them face off in a Battle Royale, last man standing type event. Naturally, the first reaction to this is refusal, but when the bears up the ante basically say that your only way of survival is by killing others, then things take a darker turn. You play as Kaede Akamatsu, Ultimate Pianist, and definitely not down for this shit. Taking a stand against the bears kinda divides the others in their opinions of you, so we're certainly off to a great start!

After any murder, a Class Trial takes place, where you must guess who the culprit, known as the "Blackened" one, is. A correct guess will lead to their execution, but an incorrect one... well that leads to the death of all the students except the Blackened one. Different things can be utilised during these to try and steer things in your favour, or to throw in your evidence to break down a weak point in someones argument, which is a great help. Obviously, to assist with both your investigations and to increase your standing with the other students, you need to interact with the other characters during the moments of Free Time that you get. You'll grow to love some of the characters, and actively try to interact with some more, but don't get too attached, as they'll probably end up dead sooner than later. 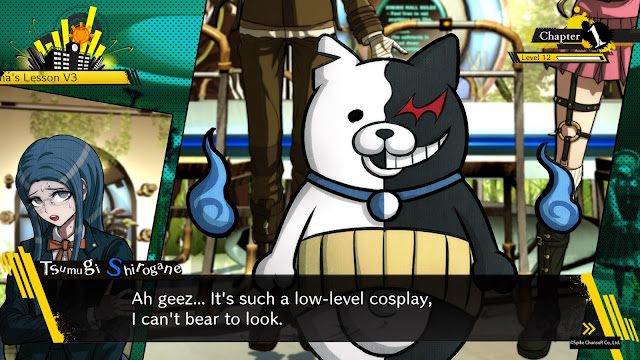 The story is a little confusing to follow, due to how much is going on and the different styles of play incorporated, but despite this I still found it very enjoyable and liked how the story progressed - even when characters I liked met their untimely end. Plot twists continue to keep the story fresh and interesting, so you never really know what's to come, constantly on your toes.

After everything, I have to give Danganronpa V3: Killing Harmony a 7/10.

Have you played this? What did you think about it?
Let me know in the comments below!