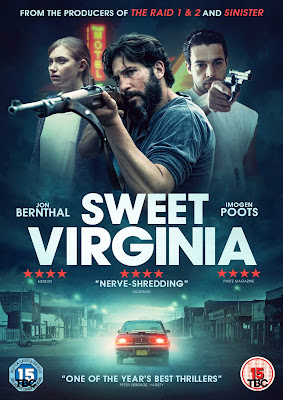 I went into Sweet Virginia with very little in the way of preconceived notions of what the film was to be. It was nice, getting to see a movie without it being built up in my head beforehand. As much as you can try to go into a movie with a clear, open mind; you will usually have seen trailers, articles and whatnot beforehand (even if you try to avoid them). We try not to watch trailers for big movies we're looking forward to, since they now tend to give away a lot of the main plot points, taking away a lot of the unexpected enjoyment out of movies. All I knew of Sweet Virginia prior to watching was that Jon Bernthal is in it; and the following description:

Sweet Virginia is a tense, violent neo-Western from the producers of The Raid 1 and 2 that will have you gripped from start to finish. As layered as it is tense this is a tight, brutal thriller with a meticulously crafted plot that starts with a gruesome murder scene and doesn’t let up from there. And it’s all carried along by a first-rate performance from The Punisher himself, John Bernthal.

Here in the Asylum, we are huge fans of The Raid and The Raid 2. That, along with a pretty decent cast was enough to have us intrigued.

As stated above, the movie starts with a murder scene, however gruesome is maybe a slight push. It's a cold-hearted murder, from a visibly emotionless killer. Throughout the entirety of the movie, Elwood, played by Christopher Abbot, is completely emotionless is almost everything that he does. Now that is not a criticism, by any means. It adds a certain level of tense, fear of the unknown type uneasiness to his character, and he does so brilliantly.

Similarly, Jon Bernthal is fantastic in his role of Sam, owner of the Sweet Virginia motel. He battles with quite a few issues in the movie, from his relationship with a married woman; alcohol; and his physical health. Bernthal's performance is very convincing. Again, grieving widows Lila (Imogen Poots) and Bernie (Rosemarie DeWitt - who I recognised from Black Mirror, Arkangel) are great too, and believably played. The characters, and the actors playing them are definitely well written, directed and acted. 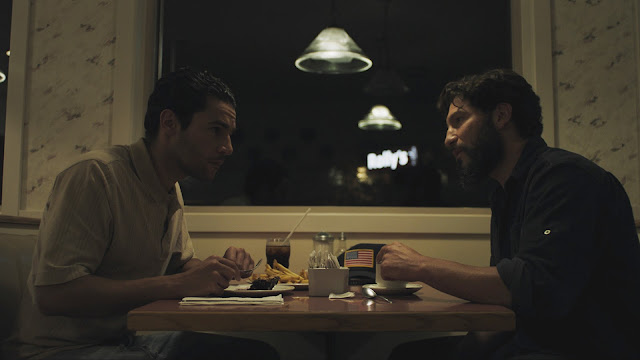 Unfortunately the story is where it falls a little flat. There are lots of very interesting plot points, but it feels like waaaay too much information was scribbled down in the writing process, with very little weeded out. Sam's backstory, of being a former Rodeo, felt shoehorned in. Why did we need it? His health conditions, maybe - his years as a Rodeo have left him with a limp and frequent shakes after too many knocks to the head. I feel that if we were to remove the randomly spliced in clips of Rodeo and the Rossi 56 top (and various other Rodeo related things, news clippings, etc) framed behind the hotel reception, then it wouldn't really be a detriment to the movie at all.

Even without the Rodeo backstory, there's still a lot of information in this movie. Don't get me wrong, I still enjoyed it, although it definitely lost a few points due to the convoluted plot. There's way too much information to sink in, and you end up feeling quite lost due to the info overload.

By the end, I knew this would be a movie I'd unlikely watch ever again. It's middle of the road: neither genuinely awful, nor fantastic.

The cast did a great job at somehow holding my interest throughout, and the film did make me feel very uneasy, which fits with what it was trying to do. 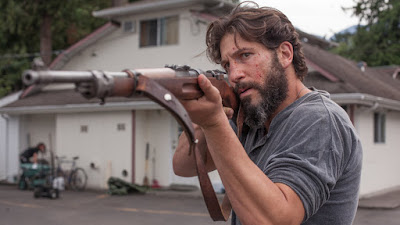 Have you seen Sweet Virginia? What were your thoughts on it?
Let us know in the comments below!