We got interested in Extinction fairly late on in the pre-release stage, with just a few weeks to go. The cinematic trailer was what pulled us in; the clear reference to Attack on Titan shown within the game had us intrigued. The Attack on Titan games (whilst the anime is amazing) were definitely lackluster, so Extinction could finally be the game that gives us what had hoped for... but it wasn't.

Upon first playing the game, it was enjoyable, if a little bare. The travel was quick, albeit a bit uncontrollable, but flailing wildly through the air did have its moments. As time went on though, we got tired of the game, real fast. The procedurally generated levels were sparse and samey, and the mission objectives dull and repetitive. The giants looked fierce: brutish and intimidating, and could frustratingly kill you in a single hit, but they again were boring, with few variations, and not very challenging. 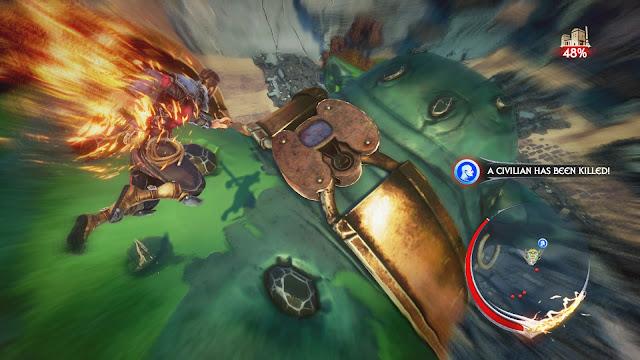 To defeat a giant, this requires you to slice the back of their necks (harking back to AoT, again), after destroying their armour and often dismembering them. Your sword has the amazing strength and power to slice cleanly through arms, legs and necks on these humongous Ravenii but somehow take multiple hits to down the smaller enemies - something which massively infuriated me. 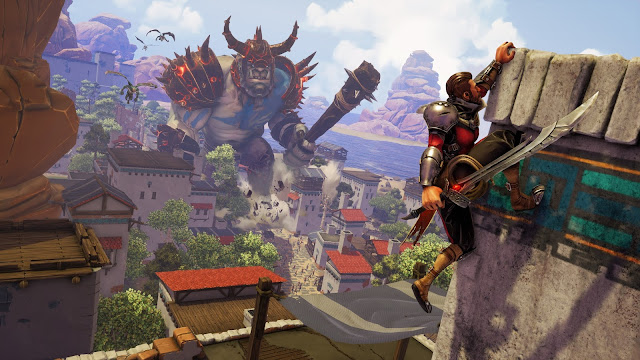 A lot of the logic of the game is highly flawed. If you are defeated in a mission, you are often flung right back to the starting point which often leads to further issues, as the long travel back to where the Ravenii are gives them ample time to flatten most buildings. Protecting the towers, we have seen the giants respawn directly next to the towers milliseconds after defeating others, leaving us panicked and trying to get over to distract them away from the towers. It's not done in a way that makes you think that it's done to be challenging, but instead in an illogical frustrating mess.

As much as we wanted to like Extinction, it is just far too repetitive for us to enjoy properly. With a AAA digital price point of £54.99 for the standard copy, and £64.99 for the Deluxe Edition, you'd certainly expect more out of this. Despite the price it commands, it looks and feels like a low-level indie, and is definitely more suited to a far lower pricing structure. I can honestly say I don't know what was going through the developers' minds when deciding to price it in such a way. 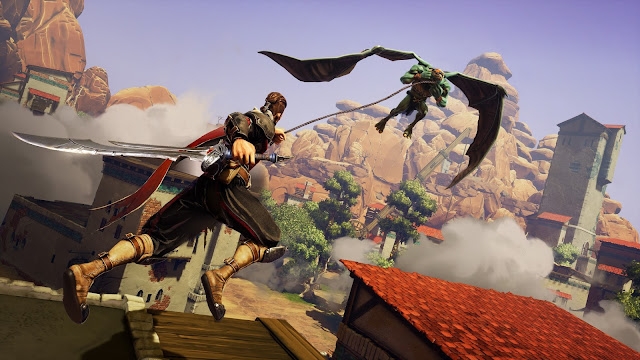 There's a few other game modes, such as Skirmishes and Trials, but these again are pretty much more of the same, and have no benefit to you for completing (aside from achievements). There are a few simple things that could have been implemented to give the game a tiny bit more depth, such as customisation of your character (or at least upgrading his armour), or collecting certain things dotted around the map, down to even the most obvious things like switching up the Trials a bit more instead of yet again just more civilian rescue (just timed).

We've come across a few bugs that have almost ended things for us, such as the Ravenii just glitching out and stopping everything they're doing - so wouldn't put out the fire in their armour, preventing any attacks. Had to quit out the game and go back on to fix it, which definitely proved frustrating since it was right at the end of a chapter. Another one was late on in the game, during a watchtower defense mission - two Ravenii just glitched and stood doing nothing, stopping any others from spawning but still allowing the timer to count down (so the mission still completed without much effort by this point!).

In the end, Extinction gets the Collecting Asylum rating of:

Have you played Extinction? What did you think about it?
Let us know in the comments below!