We recently got Hellblade: Senua's Sacrifice for Xbox One. We had been intrigued by the game since it was first revealed, but had never gotten round to playing it. Being big fans of Ninja Theory's previous games, including Enslaved: Odyssey to the West and DmC: Devil May Cry, we were definitely interested upon hearing of their latest production: a game with the main character hailing from Scotland (Orkney, specifically). It was bound to grab our attention. The emphasis on Mental Health, with Senua experiencing psychosis further piqued our interest, as it is a subject not often tackled by video games - or at least, not in any great depth.

The game begins with Senua rowing on her quest, passing by corpses displayed on the route to Helheim. The imagery is completely, beautifully creepy, and is utilised well as an opening credits scene, with crew members names displayed along the sides of the river (similar to Inside which also began with you being dropped straight into things while the credits show in the background). There's no tutorial, which we really liked, instead you learn as you go with Senua's auditory hallucinations. These hallucinations, which Senua calls "Furies" both encourage and demotivate her: some warn when an enemy is approaching from behind, whereas others will tell her she's useless and will die. You learn to read the Furies, and adapt from being mildly uncomfortable having these voices in your head, to being grateful for their presence. Wearing headphones is said to make for the best experience, however having the volume up slightly louder than normal also helped. 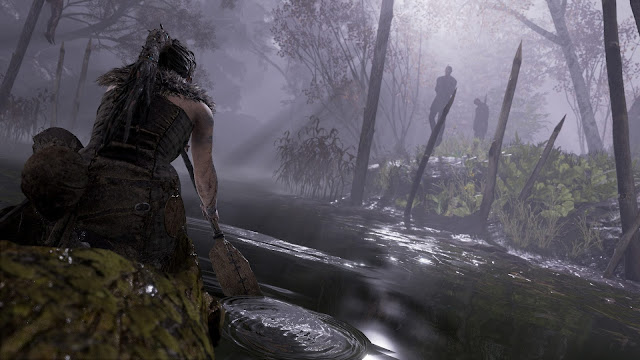 One thing I was completely worried about from the beginning was the inclusion of a Permadeath mechanic. I love games, but I must admit I'm not the greatest (most of the time), so this left me feeling paranoid that I'd never get to play the game in its entirety. The permadeath feature is explained to you by the "rot" slowly creeping its way up Senua's arm, with a description on screen describing how this will grow each time you fail, before eventually ending everything upon reaching her head: 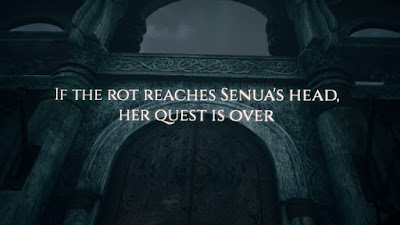 . By the first "boss", where you have a choice between Valravn and Surtr as for who to fight first (I chose Valravyn), which is where the rot is explained to you, it was located around my/Senua's hand/wrist. I died once in the main fight with Valravyn (mis-timed a parry) and was instantly like "oh my God, how many times can I die before my save is gone!?" so I made the effort to be super careful... and then I died again. Once I'd defeated Valravyn, I was calmer - he wasn't as difficult as I'd anticipated, but with two deaths under my belt I had the absolute fear about what was to come. After completing the game (and never triggering permadeath), I Googled to see if it was actually achievable. You can Google to find out more info from the articles already out there - I found this one to be quite informative. I actually like Ninja Theory's reasoning for this, as it made the game more tense and definitely made me more careful - but ultimately did not run the risk of ruining my entire playthrough (and experience of the game).

The combat was fluid and felt fantastic, despite the game being a walking simulator in most senses. But the fun combat, combined with the interesting story and fantastically immersive sound design (not to mention the stunning graphics) made this by far the best "walking simulator" I've ever experienced. 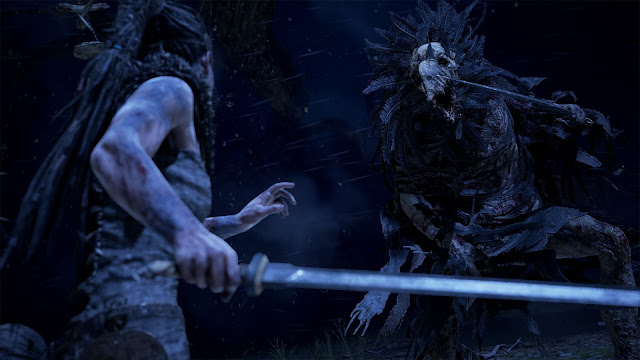 I returned from the Valravyn fight to then make my way through the other door to go fight Surtr, but was unexpectedly attacked by a bunch of Northmen. Death three. When I restarted my return to the doors, I carefully inspected Senua's arm. I'd died three times now, just what would the cut off point be? Have I got one death left? Two? Seven? I managed to make it quite a bit further in the game with no additional deaths. By the time I'd reached the four Shard Trials, the rot had grown much darker, and was as far as my elbow - yet I hadn't died again. Or had I? I was starting to question myself, and then wondering if this is what the devs wanted us, as players, to feel. 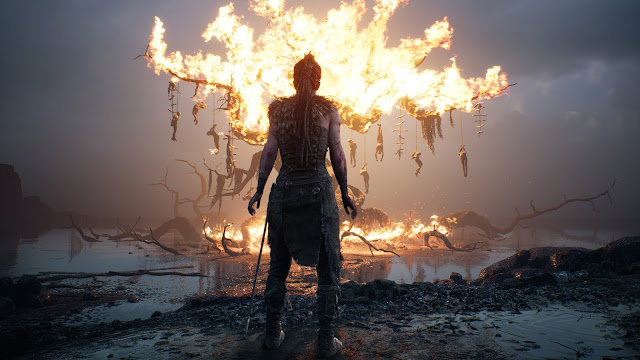 Along the way, you'll see collectible Lorestones. These Lorestones give you further pieces of insight from Druth, a man Senua once knew (known by many to be a fool) - now reduced to just the memories and voices in her head. There are 44 Lorestones to collect in total, represented by runes around a dial shown on the stones themselves. There is no chapter select, or continuation of the story after completion so if you miss one in your playthrough, you'll simply need to start over if you want to collect them all. Frustratingly, I missed one around half-way in to the game. I debated starting again (as collecting all 44 triggers an additional cutscene at the end of the game), but I was too engrossed in the story to want to restart - at least not yet. By the end, I was missing two Lorestones - thankfully these carry over through playthroughs, so my second playthrough will just be to claim the missed ones and then complete again for the final scene. Druth's voice actor, Nicholas Boulton is fantastic in his role, although I am partial to an Irish accent!

All throughout the game, I was astounded by the performance given by Melina Juergens as Senua. Not only had she been the physical embodiment of the character (as she did the motion capture for her) but her voice-acting was tremendous. She fully committed to the character, and the emotion required to play the role convincingly. The pain in her voice, near the end of the game as she shouts "fuck the Gods" - it was just so real. You could feel every bit of pain and torment that Senua was experiencing, and you believed it all. Definitely excited to see what else she has to offer in future. 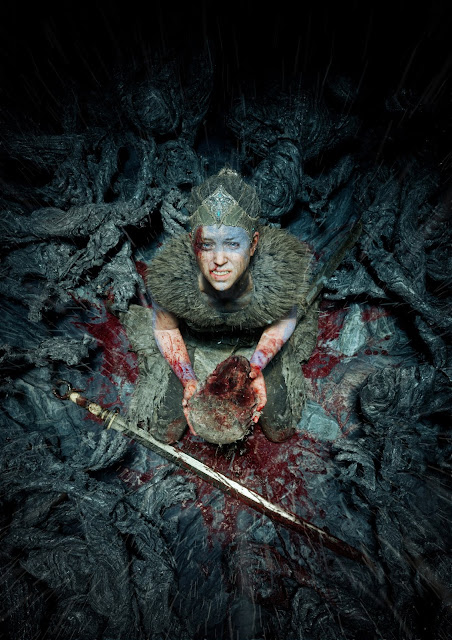 As I got to the end, I was desperate - as Senua was - and had grown weary of all of these seemingly never-ending battles. Her sword, Gramr by now was glowing blue, and her Focus power was much stronger, lasting far longer than before. This allowed me to just mow down enemies, in a completely cathartic and satisfying release, before you finally come face to face with Hela - and have Senua finally come to terms with her grief over Dillion. It was an emotional ending, one that I'll freely admit had me sobbing my heart out. The music playing over the ending and credits fit so perfectly with the theme of everything, as well as that final moment, that I could have sworn it had been written specifically for the game itself. It wasn't - VNV Nation's Illusion was in fact released back in 2007, but was just perfectly chosen for this final moment.

All in all, I'd have to give Hellblade: Senua's Sacrifice the Collecting Asylum rating of:

I'd highly recommend anybody to play (and have been struggling to not talk about every single moment of the game with friends/family!) as I really connected with and enjoyed this game more than I have for any other game in quite some time.

Have you played Hellblade: Senua's Sacrifice?
What did you think about it? Let us know in the comments below!