In a world with robotic UFOs capturing and enslaving humans, you are humanity's last hope. Developed by Reinkout Games (the first from this studio) and published by Team 17 - we were instantly intrigued by the chaotic trailer first seen way back last year. There's very little in the way of story/plot, but that actually works in a game like this.

Each level has three objectives - a main objective (usually something along the lines of destroying a generator or reconnecting lines, etc.), plus one for saving the captured humans in the level, and one for the gems scattered throughout. The great thing is that each of these objectives can be done individually - there's no need to bust a gut trying to gather all of the gems, complete the main objective and then run around rescuing the captives before fleeing the island. You can simply do any bit (and not even complete that bit, even collecting a single gem will save upon escape from the island).

Most levels are straightforward enough that you'll manage everything in one sweep-through, however sometimes you'll just not have realised a gem has been dropped or a human killed as you fly off the island, so the ability to just jump back in and finish off that one little piece of the puzzle makes life so much easier. Completing all objectives unlocks a Time Trial for the level, which we dreaded at first as the obligatory Time Trial achievements are normally f*cking nigh on impossible, but luckily the only ones required of this are to set a time on each level, and then do one particular level under a certain time - plus, you don't even have to do the objectives again, you just need to get off the island! 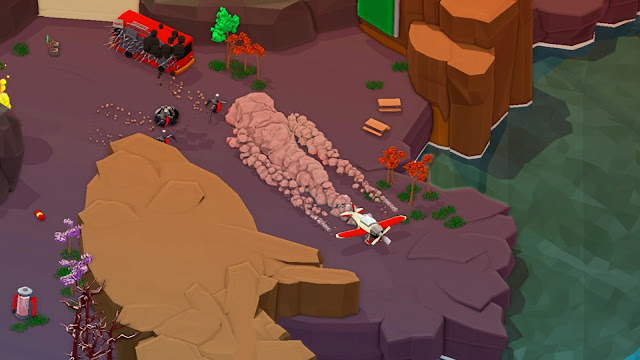 Physics-based puzzle games are definitely a big hit for me, I enjoy the challenge of working out how to progress, and when they are as simplistic in their styling as Mugsters, that makes it all the better. The sandbox-y level design allows the creativity of completing a level your own way, adding to that the ability to jump in and out of a level and still having completed objectives ticked off just adds to the enjoyment (and takes away some of the frustration that an ill-timed death could otherwise cause).

Most things can be solved through explosions: you have explosive barrels, vehicles that explode, huge fuel tanks dotted around, waiting for a badly angled turn in a vehicle (or for you to cleverly lead the UFOs to their demise). The gameplay is entertaining, although the game is shorter than I'd have liked - but for the price (just £9.99 on the Xbox Store), it's still worth it. The art style is beautifully simple, yet detailed. It's so colourful and joyful to look at, that I almost don't realise how much I'm panicking from the sound of the giant UFOs hunting me down after spotting me. I've also had a sudden moment of realisation after mentioning sound just now - whilst the explosions and everything else going on around you makes noise, and is done really well (down to the footsteps of your character), there is no music in the game at all (aside from the main menu). Neither me or Allan realised this at all upon both of our playthroughs, and it didn't bother either of us at the time, but now I'm aware of the distinct lack of music - it's actually kind of annoying me, haha. We both feel that it would likely have added a lot to the levels, but hey - we're not the developers, maybe they tried music and realised it worked better without? 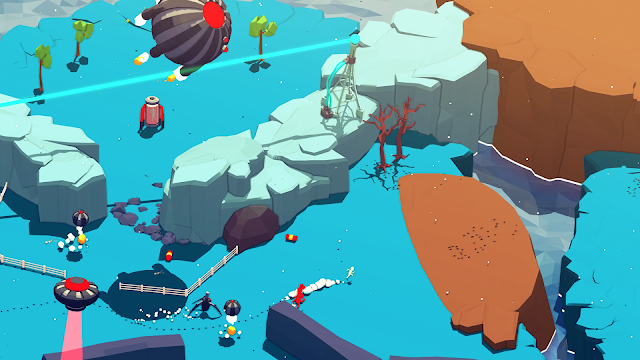 Mugsters is a wondrous little gem of a game and really captured our minds. The ending was a little plain, which was slightly disappointing after figuring out a code to actually access the ending, but overall we were still very impressed with the game as a whole.

In the end, we decided to give Mugsters the Collecting Asylum rating of:

Have you played Mugsters? What did you think of it?
Let us know in the comments below!