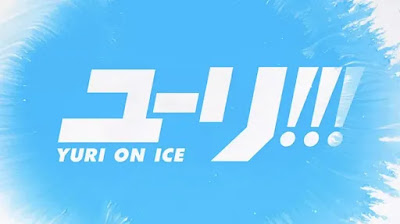 Always interested in a new anime to watch, we tried out Yuri!!! on Ice after we had it offered to us to review. With neither of us being fans of figure skating (we've never once been tempted to watch Dancing on Ice, or any other shows similar to that), and tending to mostly be interested in animes that have some sort of super-power or sci-fi element to them, we weren't sure what to expect... but boy are we glad we watched it.

From the moment the intro starts, you're mesmerised. It is beautiful to watch, and the intro music "History Maker" is really catchy and inspiring - "We'll make it happen, we'll turn it around, yes we were born to make history" - even when it feels like nothing is going right, and all is against you, the song gives a very uplifting, hopeful feeling, which is extremely fitting for the series from the get go. 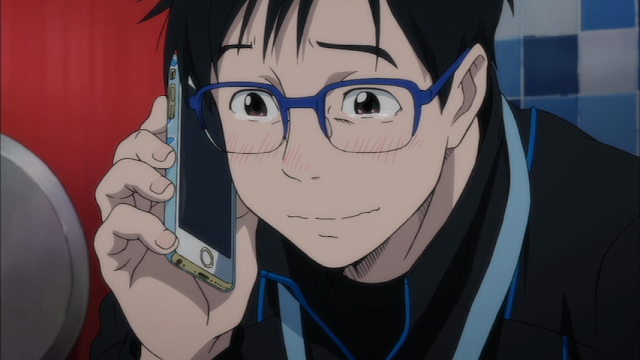 The series follows the titular Yuri Katsuki, nearing the end of his career as a figure skater after an embarrassing failure, and his idol, legendary Russian professional figure skater Victor Nikiforov, who discovers Yuri after seeing a viral video of him performing one of his routines, and instantly takes a shine to him. This then leads to him becoming a coach and mentor for young Yuri as he tries his best to improve and become a skater just like Victor.

23 year old Yuri is a very relatable character, in more than just the fact that this show is based entirely in reality - no fantasy powers or otherworldly locations here - but in that his battles with depression and anxiety, as well as sexuality and self-doubt just feel all too real. The relationship he has with Victor, going back and forward between loving him platonically, and romantically - and struggling with how to decide upon his feelings at first - feels genuine, and riddled with the expected confusion from a couple that at first don't quite know where they stand with each other. Their relationship blossoms, and leaves you feeling cheerful at how things are progressing with them, and how Yuri's confidence in himself grows as he learns to love himself - as he comes to terms with his emotions - instead of constantly feeling that he isn't worth it, and would never amount to anything. It's refreshing to see an anime have such a focus on the emotional aspect of things, at least in terms of mental health. With so many people now fighting their own battles against anxiety and depression, it's nice to have a kindred spirit in Yuri. 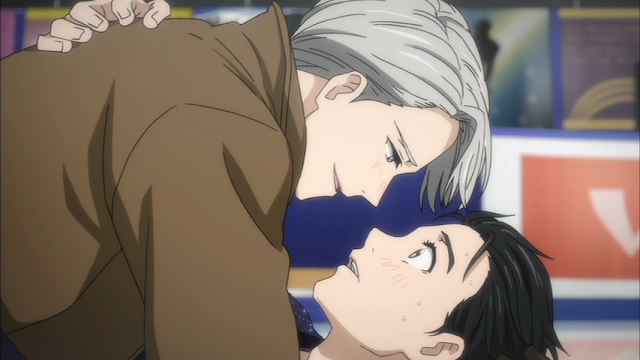 Watching each episode and seeing each challenge Yuri faces as he tries to progress and win medals in these tournaments never fails to keep me drawn in. I must admit, I did wonder at first how each episode would keep me interested when it would just be people competing at figure skating (as mentioned above, I'm not normally a fan) but there's so much more to YOI than just the figure skating, albeit that is the core premise of the show. Each tournament had you eager to see how Yuri's competitors would get on, and likewise, how Yuri would improve from his last appearance. It doesn't always go smoothly either, you regularly see competitors slip, fall and injure themselves in a variety of ways due to the difficult maneuvers they attempt, and Yuri isn't exempt from this - in fact, to begin with, he's probably one of the clumsiest of the lot (which further related to myself!). I thoroughly enjoyed watching the routines, and whilst I still don't think I'll take an interest in actual figure skating, I can certainly appreciate the beauty of the routines and the choreography that goes into them more having watched this.

The rest of the cast, whilst not as prominent as Yuri or Victor, is filled with characters with just as much life and emotion. From the cute, cheeky little triplets who are always up to mischief, to Yuri's rival - Victor's other mentee - 15 year old Yurio (also named Yuri, but nicknamed Yurio to differentiate), who is a little more rebellious than he is, and filled with teenage angst to boot, there's plenty of very recognisable behaviours and personalities filling out the series. Each of the voice actors behind the characters do a fantastic job also, from the hesitant Yuri and confident, alluring Victor, to stressed out mother Yuuko (who is run off her feet with the triplets). 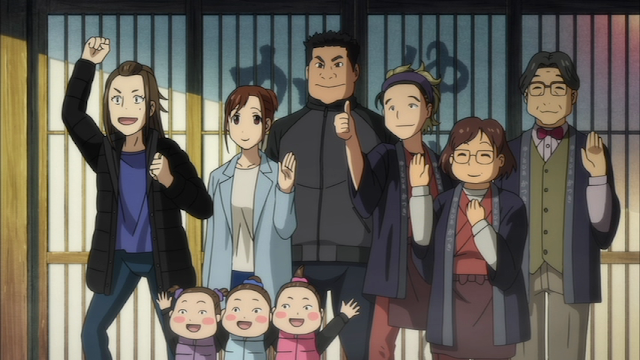 Similarly to the intro, the end credits has a fantastic soundtrack with "You Only Live Once", another inspiring and enjoyable track - and one that gives me the feeling of those songs you hear at the end of a night out, when you've had a great time, but you're glad to be heading home to get some rest. The accompanying images are really well done and fit this too, with snapshots of moments and memories - giving a bit more insight into the characters and their lives. It's rare that I find a theme song (intro or outro) for an anime that I dislike, but it's not often that I enjoy both as much as I did with these.

Overall, I completely adored YOI, and would highly recommend it to others, particularly those who are a bit more open to less fantasy or action based animes, and ones more focused on character relationships and emotions.

In the end, we decided to give Yuri!!! on Ice the Collecting Asylum score of 9/10!

Have you watched Yuri!!! on Ice? What did you think of it?
Let us know in the comments below!

Asylum Reviews: The Surge - including The Good, The Bad and the Augmented DLC [Xbox One]. 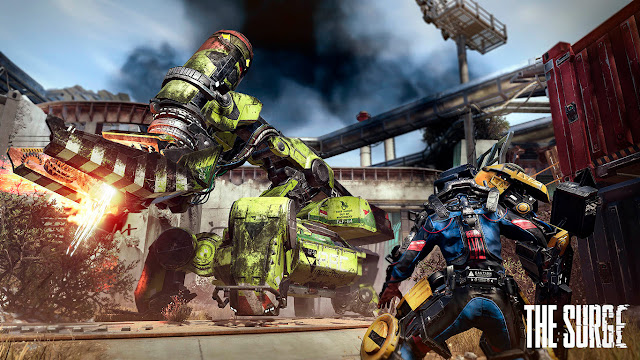 Deck13 Interactive's The Surge is a brutally punishing sci-fi action RPG, very similar in difficulty to the Soulsborne games. You play as Warren, a man, paralysed from the waist down, looking to join CREO - a company that deals in fancy new exo-skeletons that will restore his ability to walk. After entering the facility, you must select a suit based on your preferences for playing the game, before a cutscene shows how the suit is wired into your body. It's pretty grim to watch as the anaesthetic doesn't fully kick in and your character is awake throughout the agonising, torturous process.

There are two suit types you can choose from, the Lynx suit which is more agile and easier to dodge enemies with (but has a decreased health bar) or the Rhino suit with its increased health, but slower, clunkier movements. I plumped for the Rhino, as I figured that more health would work out best for me in the long run, but the reduced movement speed definitely impacted my play, as response times just didn't quite line up the way I'd hoped. 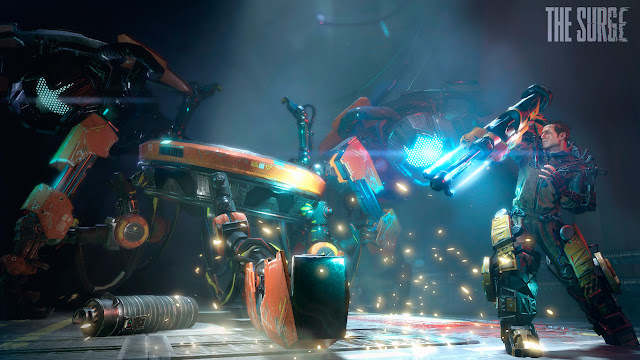 The difficulty is crazy from the get-go. Both myself and Allan struggled at first to get used to the controls, along with learning how to time attacks and dodges from the various enemies that can do you some serious damage if you're not prepared. Enemies vary from small drones that aren't too much hassle, to large spinning cranes that will completely destroy you before you even have a chance to react.

Level design is somewhere between boring and clever, with samey looking levels looping back round ad infinitum to the Medbays. It can become quite hard to navigate some areas of the map based on how similar everything looks, and with no map on the HUD to guide you, it can be super easy to end up wandering through the same area multiple times. Similar to Dark Souls with its bonfires; medbays totally refresh the area bringing defeated enemies back to life, meaning you have to make the decision of whether working your way back to replenish your health is going to be worth it, or if you should just push on in the hopes of another medbay appearing ahead. Medbays have multiples routes to get to, allowing shortcuts to form from later stages of the map to gain you access again without having to make your way through large numbers of enemies each time. We both definitely appreciated this approach, however the medbays (and the shortcuts) always seemed just a tad too far apart, increasing the punishing aspect of the game. 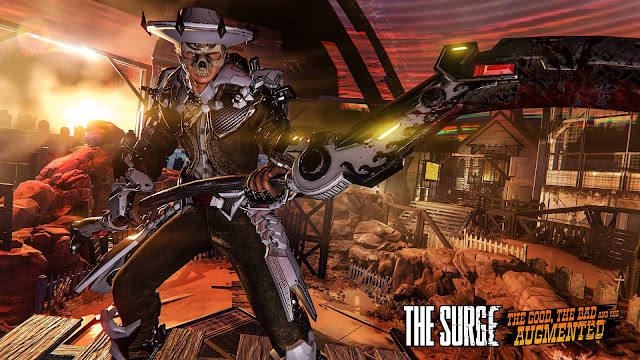 The most recent expansion: The Good, The Bad and The Augmented, adds a short Wild West themed section that can be accessed early on in the game if playing New Game Plus, or slightly later if still on your first playthrough. As well as this, it adds lots more weapons, armour and implants for you to utilise. It ditches the open world aspect of the core game, and instead is done in a more episodic style, with stages unlocking in threes (to a total of nine) as you progress through the story of the main game. To complete each one, you must survive throughout two stages before you come up against the boss. There's not a whole lot of difficulty to these once you've got the hang of playing the main game, but having to stay alive through the two mini-levels before the main boss can prove frustrating, as you can easily fail through stupid, simple mistakes - not unlike in the core game! Each episode can also be done with modifiers, such as faster movement, or switching health re-generation off entirely - this can add a little bit more challenge to the play, but when you're already struggling (like we were!), this is something you'll likely avoid, ha.

If you are fortunate enough to have some Lucky Coins, which are found within the levels preceding the boss, when you die - then you will be given the opportunity to retry the boss battle (saving you the hassle of slogging through the two prior stages again). As much as we liked the Wild West theme, there just wasn't enough going on with this DLC to keep us interested, and the repeated deaths between this and the core game just had us a bit fed up by the end. If you're a glutton for punishment though, and love Soulsborne style games, then you'll probably find far more enjoyment in The Surge (and its expansions) than we have. Objectively, it's still a worthwhile add-on for fans of the genre (and particularly those who enjoyed The Surge, itself), just not one that we were all that enamoured with.

In the end, we decided to give The Surge: The Good, The Bad and the Augmented a Collecting Asylum score of 5.5/10, with the main game gaining an extra half-point (giving it a 6/10). As I've mentioned, we can see the reasons why people will enjoy the game, it just wasn't one that we wanted to go back to often due to its highly frustrating difficulty, but if that's your thing - then you'll definitely enjoy it more than we did.

Have you played The Surge, or its DLC expansions?
What did you think of it? Let us know in the comments below!

Email ThisBlogThis!Share to TwitterShare to FacebookShare to Pinterest
Labels: Asylum Reviews, The Good The Bad and The Augmented, The Surge
Newer Posts Older Posts Home
Subscribe to: Posts (Atom)