Asylum Reviews: Bendy and the Ink Machine [Xbox One]. 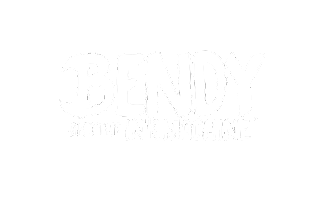 Anyone that knows me, knows that I can't handle scary games very well. In fact, the game doesn't even need to be outright scary for my anxiety levels to go through the roof - just add a tense atmosphere and boom, you got me. I've been known in the past to just tap out from games altogether due to this, as the level of tenseness and panic within me far outweighs the need to play the game. Bendy and the Ink Machine has achieved what many other games have not - having me riddled with anxiety but still desperate to go on.

The art style, very Steamboat Willie-esque, early Mickey Mouse era stuff, is gorgeous, and translates the creep-factor well. Black ink oozes from surfaces and creates a great contrast, and the sepia tone further adds to this. Everything has a very authentic old-school animation feel, and the sinister undertones of what is happening at the studio juxtaposes well with the cartoonish style. 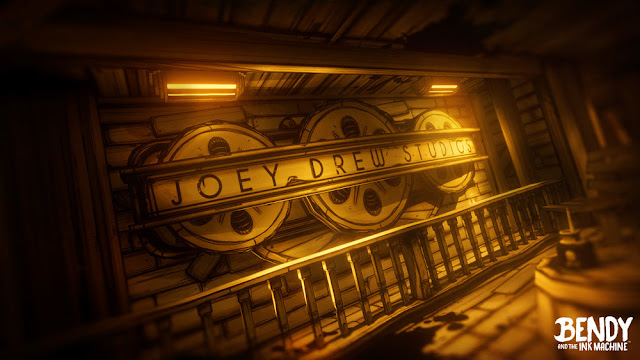 You play as Henry, a retired animator who has been asked to revisit his old workplace, Joey Drew Studios, and in doing so comes across nightmare-ish ink creatures that have sprung to life. Each creature type is satisfyingly creepy, from Lost Ones and Searchers, to the Projectionist and the dread-inducing Ink Demon.  Even the cardboard cut-out Bendys that are dotted around the studio often catch you off guard as you whip round corners, leaving you questioning if they are moving when you aren't looking.The smaller enemies had my heart pounding any time I came across them - and my GOD the noises they make - but the Ink Demon Bendy, by far terrified me the most. The way that the inky shadows take over the room to announce his presence, a hint for you to run and hide, just completely terrified me and left me feeling worried about what was to come.

The enemy AI feels threatening, with the noises they make alerting you to their whereabouts and giving off a sense of impending doom, however after they spot you, you can often outrun them - and if you know the location of the nearest Little Miracle Station, which is a cabinet that you can hide inside to lose the enemies attention, you can quickly dive inside and they'll then somehow forget all about you (even if they watch you enter it!). This did take away some of the threat from them, but depending on your location upon them spotting you, and how good your memory is, you might not get a chance to hide from them.

As the game progresses, you will come across another inky character: Alice Angel. Instead of instantly going after you and wanting to kill you, like Bendy does, she decides she could put you to better use instead. She has a hatred for Bendy, and figures that you might be able to help her out with some tasks to regain some control of the studio, and to irritate Bendy in the process. The tasks include retrieving items for her, and destroying some of the Bendy cutouts. I really liked this section of the game, and the panic that it brought as Alice's voiceover warns you not to run too much in case you draw Bendy's attention. 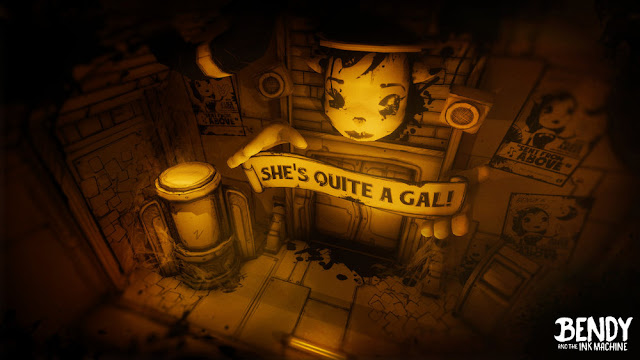 Sound design was fantastic with the varying sounds increasing the tension, and environmental sounds such as ink dripping, or film reels spinning leaving you second guessing everything you hear: is it an enemy? Where is it coming from? etc. etc.

Voice acting was done well throughout, with a nice surprise in the form of Jacksepticeye's voice on one of the recordings within Chapter 3. The actors were convincing in both their threat (from the likes of Alice), and the confusion in some of the recordings' voices. These cassettes, located all throughout the levels, add in further backstory to what had been going on in the studio long before its closure.

Gameplay itself was enjoyable and figuring out puzzles was entertaining, if a little frustrating at times when I couldn't immediately tell what I was meant to do next. Movement often felt slow/sluggish when trying to run from enemies, and every now and then reaction times would almost grind to a halt (particularly in one boss fight when trying to dodge a projectile), so I'd have to overcompensate by moving before you'd reasonably expect to avoid this issue. This luckily only happened a few times, and was possibly a glitch (in the case with the projectile) as I gave up out of frustration and exited out completely, then reloaded the game almost instantly and it worked fine first time. Also, in the final chapter, a couple of times an enemy got trapped within a wall, but this would fix itself as soon as I walked past and they noticed me so wasn't too much of an issue.
There are a bunch of secrets to be found throughout the levels - some of which can only be seen after completing the game and unlocking an item to be used on all chapters - and tonnes of tins of Bacon Soup littered all over the place for you to collect. I thought I'd done really well collecting all of the soup, only to not be awarded the achievement at the end, so must have missed a couple somewhere. 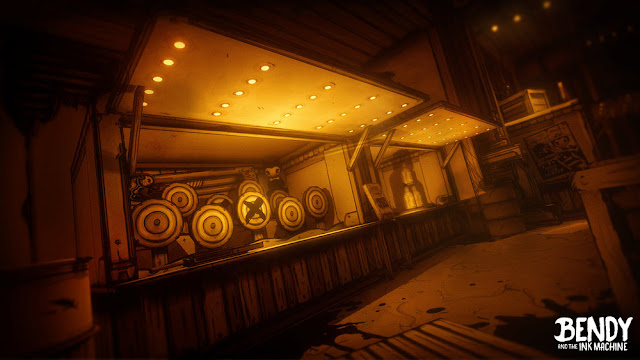 I thoroughly enjoyed the game, and would recommend to anyone to give it a shot. A few minor gripes here and there, but overall I loved it. The simplicity of the game (both in terms of gameplay and art direction), paired with the genuine feeling of dread and tension made for a fantastic time.

In the end, we decided to give Bendy and the Ink Machine a 9/10. 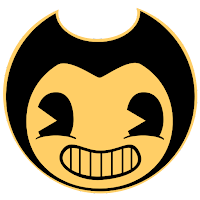 Have you played BATIM yet? What did you think of it?
Let us know in the comments below!

Email ThisBlogThis!Share to TwitterShare to FacebookShare to Pinterest
Labels: Asylum Reviews, Bendy and the Ink Machine