Floor Kids is a new rhythm game that immediately caught my eye due to its gorgeous art style (by JonJon), awesome Kid Koala soundtrack and of course the fact that I am a sucker for rhythm based games. The idea of the game is to pull off cool breakdancing moves to gain a high score to unlock new characters and areas. Initially, it seems quite difficult but you quickly pick up the basics of how to bust out a sweet routine.

Dances consist of four different move types: Toprock, Downrock, Freezes and Power Moves. People in the crowd will sometimes call out for specific types of move, allowing you to gain a bonus for pulling it off. You've got to combine different moves, whilst tapping to the beat of the track, and not holding moves too long for fear of getting boring, or falling on your arse with a badly timed transition or Freeze move. With a bunch of different characters to choose from, each with their own style, you'll work your way through each one, aiming to achieve the best scores possible. 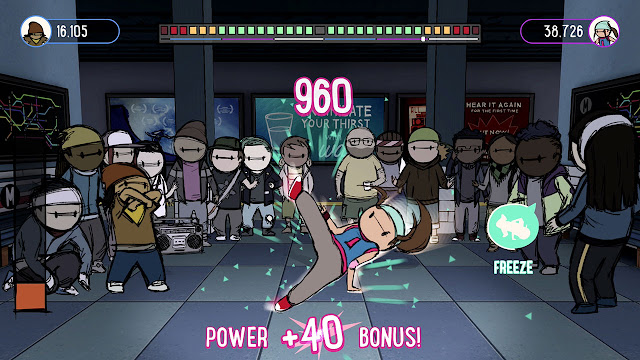 In order to gain the best scores, you need to successfully accomplish combos. The game will nudge you as to which combos should be done, with a list of moves being shown on screen, however it is whether or not you remember what these moves translate to, and how to actually do it, that is the deciding factor in how well you'll do on a track. At the end of each track, you will be awarded a rating, up to a total of five crowns. This is then shown in the Summary, awarding points as to how you did for your Base Score, and five sub-categories of bonuses: Funk, Flavor, Flow, Fire and Flyness.

Tapping RB (on Xbox) then gives you the full Breakdown of how this was made up, from each of the types of moves used (and skill multipliers gained), as well as how each bonus is awarded. Funk consists of your Beat Accuracy for the main track, as well as the two chorus sections, which are more like standard rhythm based games, where you need to time your taps with what is happening on screen (as opposed to being based purely on sound). Flavor is given from using each of the 16 moves available to you, and if you have achieved a hold, pose, taunt, etc. Flow is determined by the flow of your routine, and falling or stopping moving can affect this. Fire is based solely on requests from the crowd, and whether you managed to give the crowd what the wanted to see. Finally, Flyness comes from how many holds, hops, reversals and more that you executed, and duration bonuses from your Freeze and Power moves. 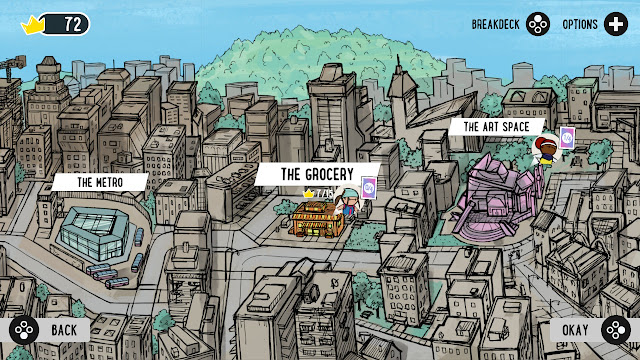 I kind of wish that the game was structured more like DDR, or almost any other rhythm based game, where lining up moves with target zones gains a hit, rather than it being totally freestyle aside from the two Breakdown sections on each track. Freestyling feels more frustrating to me, as there is a great deal more concentration required to remember how to achieve each combo, as well as making sure every move is used. I like a challenge in a rhythm based game, but one that comes from the rush of trying to keep up with what is on screen, rather than memory.

That's purely a personal preference though, so I imagine a lot of other people would still have enjoyed this fresh change in the rhythm genre. Sadly, the game is disappointingly quick to finish, with everything being able to be completed in less than 4 hours (and that's with being leisurely about it!). It would have been nice to have a bit more meat to the core gameplay, although the addition of multiplayer battles will certainly increase the replayability a tad - but again, I think this would have further benefitted from at least some sections of traditional rhythm based gameplay (when are we going to get another good DDR style game!?) 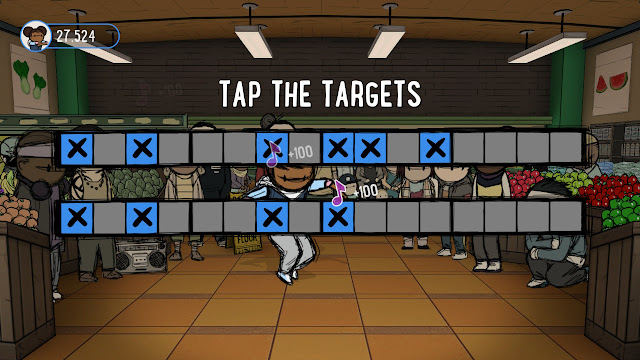 In the end we decided to give Floor Kids the Collecting Asylum rating of 7/10. Despite the short length, and the fact that Freestyle wouldn't typically be my first choice for rhythm games, I still really enjoyed Floor Kids and would recommend it to other rhythm lovers, especially as it's just so damn adorable looking!

Have you played Floor Kids? What did you think of it?
Let us know in the comments below!