Another quiet week in the Asylum. It being January is to blame for that - every year, without fail, January feels longer and longer and longer. And right when you think January is over and payday is near... You realise it's a day later than you thought!

Really glad to have gotten my hands on Empty Man, as it's such a gorgeous piece. Likewise, I'm happy I picked up Waterworks. Trying desperately to not miss any Arrow releases, so if you notice any missing from the Asylum, please feel free to give me a nudge!

What new things have you received this week?
Let us know in the comments below!

Within minutes of installing FutureGrind, I was hooked. The repetitiveness of being so determined to nail a track and bag some high scores is equally infuriating and thrilling. The aim of the game is to complete tracks and fulfill the tasks set out before you. You might have to perform a particular trick, whilst also managing to survive the track (often easier said than done) or touch a certain number of coloured rails.

The art style is beautiful, with bright neon rails taking the forefront of the scene. Positioned high in the sky, this removes the need for much else going on in the background aside from a nice landscape, and it works really well with the aesthetic of the game. Sound-design is also very fitting with the music syncing up well to the movements you'll do to pull off each trick or move from rail to rail.

Colour zones, which recolour your vehicles wheels are signified by a large bar of colour surrounding a rail, and having a wheel go through this aligns it to that colour. This means that the wheel can then only touch rails of a matching colour - unless you go through another colour zone to reset it. This adds an exciting layer of challenge to the tracks, as it can be quite difficult to decide when is best to colour wheels, and if you should go for just one or take the risk and go for both, in the hopes that another zone will come up to change this again if necessary.

There are a few different variations of vehicle, ranging from the Tron-reminiscent bikes, to weird flip-floppy bikes with one huge wheel and a tiny one pendulum-swinging above or below it. Learning how best to utilise the bikes, and how to pull off different tricks with them, be it flips or varying grinds on the rails.

There's a story going on in the background involving corporations who are looking to sign you to pull off stunts on their tracks, and some kind of nefarious plot going on between them (with some tracks being blocked out initially with warnings of "Illegal system access detected" and "Unauthorized user account terminated" coming up when you try to enter them. Whilst it's nice that a story was added, the tracks themselves - and the challenges within - are enough for me to not pay too much attention to the story, instead clicking furiously to load through the typed dialogue to let me into the next level.

There's a fantastic addition of a Colour Blind mode, which allows the rail/wheel colours to be selected to help aid play for people who have trouble differentiating particular colours. This is a great bit of forethought into accessibility from the developers, and something I wish more devs would take into consideration in reference to differing abilities. Similarly, there is also an option within the game to turn on Assist Mode, which modifies the game rules to allow easier play. The devs are aware of how challenging the game can be, so have given this as an option to allow people of all abilities to be able to cope with the difficulty. The only thing that this switches off whilst active is the ability to save high scores, which is a fair trade off for greater accessibility.

As frustrating as it is satisfying, FutureGrind really delivers something special. If you're a fan of games like Trials, and enjoy a challenge then this is the game for you. While I wasn't particularly enamoured by the story, mostly due to my own impatience of wanting to get right into the next level, I feel this didn't negatively impact the game much, as it would have been perfectly fine even without the story in place.

In the end, we decided to give FutureGrind the CollectingAsylum rating of 8/10.

Have you played FutureGrind yet? What did you think of it?
Let us know in the comments below!

This week's Entries to the Asylum were Blu-ray filled. Things have definitely slowed down recently, especially due to how skint we are after Christmas. Really hoping to get back to usual soon!

Love all these pick ups, hopefully continue to get the rest of the Mondo steelbooks that I'm missing ASAP!

What new things have you received this week?
Let us know in the comments below!

Email ThisBlogThis!Share to TwitterShare to FacebookShare to Pinterest
Labels: Assassination Classroom, Elvira, Entries to the Asylum, Mondo, The Little Mermaid

A little bit of a surprising week this week... We've had no arrivals! A few things are on the way, and we did actually get a customs slip - for £41!! - ouch, but as most of you will appreciate... it's January. And we're skint. So collecting that will have to wait until I'm a bit more solvent haha!

This week we've been doing a lot of planning for future tattoos. We'll be attending the Scottish Tattoo Convention this year and are currently in talks with a few different artists for things we want to get done. We'll keep the plans a secret for now though so that we can surprise you all once we're inked up :)

I'm also about to book an appointment to go get my septum pierced. Really can't wait for this, but again, money is the only thing delaying me at the moment.

Realised that over the Christmas period, there were a few releases we missed out on, so I have been slowly but surely updating my Amazon wish lists to try and keep track of these. For things not available to purchase through Amazon though... I'm a little stuck. I had created a spreadsheet but that seems like a lot of work - what do you all use to keep track of non-Amazon wants? For instance this is amazing, and I want it so bad. I mean, how gorgeous is this set, and it would be great to do a full unboxing and review of it, but it's just too expensive for this time of year. So I'll need to keep track so that I remember to pick it up once I have money, before it sells out.

So what do you use to keep track? And what new things have you picked up this week?
Let us know in the comments below! 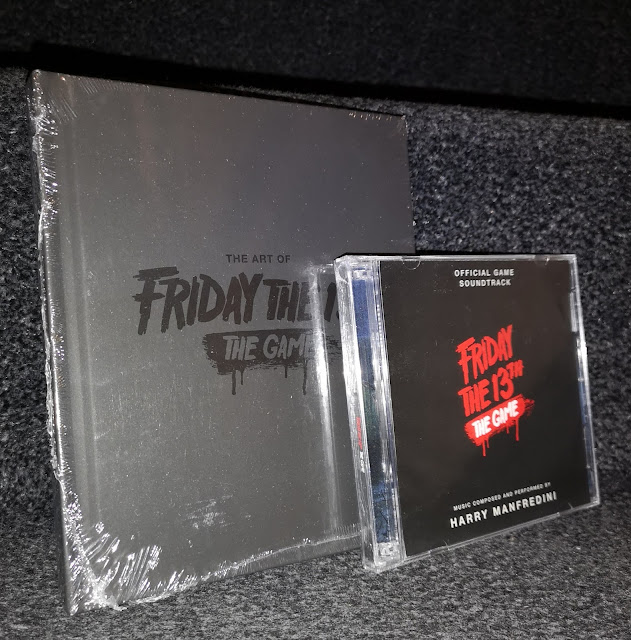 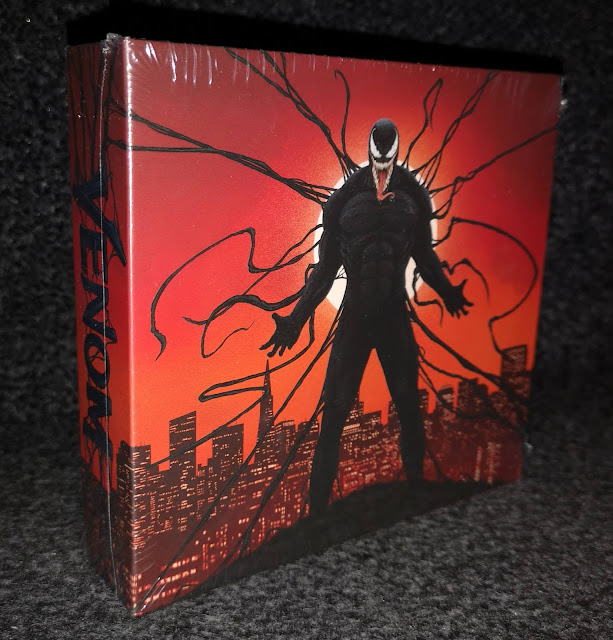 What new stuff have you gotten recently?
Let us know in the comments below!

Email ThisBlogThis!Share to TwitterShare to FacebookShare to Pinterest
Labels: Entries to the Asylum, Friday the 13th: The Game, The Critters Collection, Venom

So 2018's weekly Entries to the Asylum posts were a bust, but I did have lots of partially written drafts from various weeks throughout the year, so here is the run down of the stuff I can remember/already have documented from this huuuuge backlog. Lots will be missing, that's a no-brainer, but at least this will get a good chunk of it listed! Anything that I remember, I will add in later - but this is what I have so far.

Apologies again for being so... meh in 2018. I promise to do a better job this year!

Again, sorry for the wait - and for those of you who stuck around and checked religiously for updates - massive, massive apologies to you, but thank you for the support! Check out my Instagram and Twitter if you want little notifications any time a post goes live.

Email ThisBlogThis!Share to TwitterShare to FacebookShare to Pinterest
Labels: Christmas, Entries to the Asylum

2019 is here at last... or rather, already. 2018 totally flew by, and I feel like I was so, so much less productive than I'd have liked to be. I fell victim to procrastination far too many times, and buried my head in the sand about a lot of things - often losing track of release dates, etc. I felt very much not myself throughout most of 2018, and always felt like I was chasing my own tail trying to stay afloat with everything.

This year, as corny and cliche as it sounds, I am determined to stay on top of everything and keep to a planned schedule for everything. I also am planning on getting the Youtube channel back up and running, finally, within the next few months. I need to get some supplies first (camcorder, mic, etc.) but I'm completely undecided on what would be the best options. I have created an Amazon wishlist here, so if you have any advice as to whether I should go for these items, or get different ones (that you find are better/more suitable) then that would be appreciated.

I had planned on doing a weekly Entries to the Asylum post each week in 2018, and whilst I did keep that going for a while, it eventually got dropped because I lost track, and it was too difficult to remember/keep track of what came when. This year, I am going to make sure that I do this, as it's not only a regular piece of content for yourselves (and will eventually tie in with the Youtube videos so you know what's coming up soon), it's a good resource for myself to keep track of what items we have and when we got them. These weekly posts will be posted every Sunday evening, and will document everything that has arrived over the previous week. Full unboxing photos/videos will not be included within these posts, just simple front shots of each item (or possibly together in a group shot for each day's arrivals) and the more in depth posts will come separately.

I'd also love if everyone could take the time to give us a quick follow on our Social Media pages, as I plan on posting more content on those this year too (previously, Instagram got all the love).

If there's anything you want to see more of in 2019, or want me to start up, then please let me know. You can either send me an email or leave a comment below, and I'll be sure to get back to you as soon as possible!