Fatbot Games' Vaporum is a new trip down the grid-based RPG dungeon-crawling lane. Previously released on PC back in 2017, the console port has finally arrived. Set on a small island, within a giant mechanical tower - you have no idea what is going on. Why are you there? Things seem familiar to the character, but you'll have to piece together the puzzle from clues hidden throughout.

Soon, you'll be presented with the option of a few different Exoskeleton Rigs to choose from. These all vary as to what might best suit your play-style preferences - this can range from Rigs that are optimised for Combat power, to Heavy Rigs which are slower but can take more of a beating, to the Thauma Rig for additional health/healing ability. Whichever you choose, you'll be stuck with, so be sure before you make that choice. 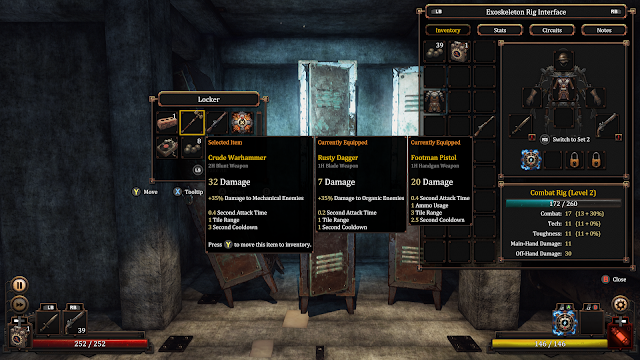 There are hidden notes and recordings located throughout the game which dive in to a little more of just what has been going on. From tales of porno mag stashes, to information about hidden weapons, these secrets flesh out the world a little more, enticing you in. The maps are decently sized, with some backtracking needed at times to find items or access newly unlocked areas, encouraging you to explore. Having the mini-map viewable helped me to adjust to my surroundings on multiple occasions due to sections looking very similar - this allowed me to re-assess the course I need to take in order to progress, and the ability to add custom markers to your map as a reminder for important things (such as locations to return to upon finding the relevant key) was a god send.

The story itself however, left me feeling a tad flat. It feels like the story, explained through the protagonist's narration, grinds to a halt frequently and the voice acting is very inconsistent with some parts feeling well done and convincing... and other parts not so much. Locations are dull and repetitive despite the decent amount of detail that has gone in to them, which is a shame. An optional game mode, "old school" makes you play with no game map visible, forcing you to whip out a pen and paper if you have any hopes of navigating your way through the almost maze-like locations. 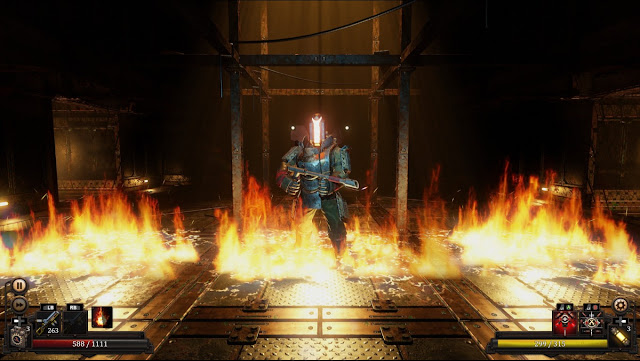 Movement during combat was frustrating: rotating on the spot whilst trying to move around a target would leave me vulnerable to attack - and using abilities such as slowing down time didn't seem to improve this much. With each battle, you'll gain EXP as well as loot which can be used to instantly upgrade your Rig. Additional armor or improved weapons are always a bonus, so checking every possible nook and cranny becomes second nature when playing a game like Vaporum. These additions could be the difference between life or death, so ensuring that you don't miss anything important is key. EXP is use to upgrade your suit via circuits. Choosing particular circuits will provide a boost to certain stats or unlock new skills, so always make sure to upgrade when you can.

With five difficulty settings I thought going straight down the middle with "Normal" would have been a safe bet. Not a chance in hell would I be going near Brutal, but I didn't want to give myself too much of an easy time - after all, a little challenge can be good. However, even on Normal, Vaporum sometimes felt like the odds were unfairly stacked against you. Gathering Fumium on your journey, and using it to upgrade your abilities via your Skill Tree negates some of this, however there is such a sharp incline in difficulty that you might rage-quit before you even get so far as to see it properly make a difference. Special Abilities can be gained, which are a fantastic addition to your arsenal - the electric shock one that you unlock towards the beginning of the game was a personal favourite of mine. Must keep in mind though that this doesn't impact all enemies the same, in fact, some may receive very little damage through electricity at all. 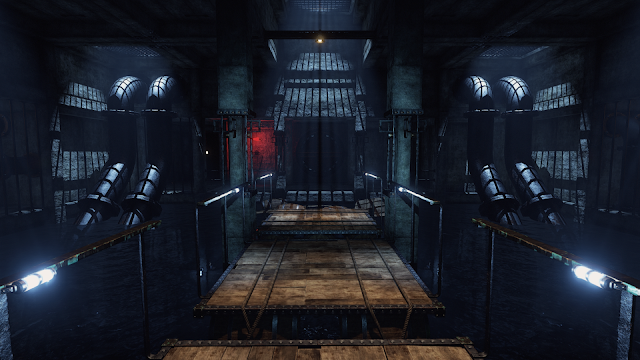 Lighting was god-awful throughout large portions of the game, and combining this with the already dark and gloomy atmosphere, I'd often find myself struggling to get my bearings and suss out what I'm looking at. Some moments would feel clearer, but this was short-lived, and when you're on the lookout for enemies this can sometimes leave you feeling quite annoyed.

Enemy types are varied and require some thought when planning your attack. Initial enemies such as Welder Drones are easy to take down in a few hits of your trusty crowbar (the first weapon I found), which itself appears to be a little nod to Half-Life, as is inscribed "Happy Anniversary Gordon", causing you to say "Who's Gordon?". Later enemies require some tactic, and utilising different weapons and skills is the best way to defeat them. Identify potential weaknesses, and then use this to your advantage. 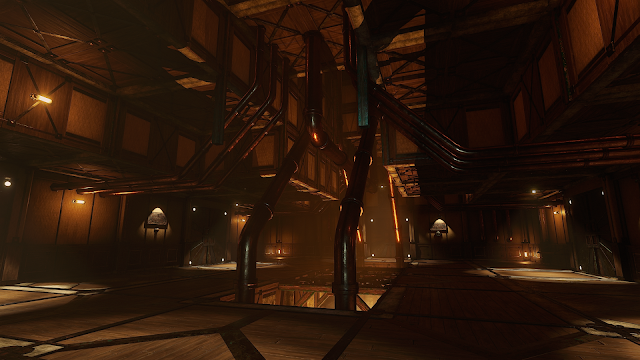 In the end, Vaporum just didn't grab me like I'd hoped, which was disappointing as we loved the Steampunk aesthetic to begin with, but the slow pacing and frustrating combat left us feeling slightly bored. Therefore, we decided to give Vaporum the Collecting Asylum rating of 5.5/10.