I have a weird relationship with Mortal Kombat games. The wide selection of moves that are available to you, and the varying degrees of difficulty in successfully using them means that the ability to learn and master them is there. I enjoy practising these moves over and over, improving ever so slightly each time I pull one off. I'll go over the tutorials with such intense scrutiny, ensuring that I figure out how to achieve the moves to add them to my skill-set. I slowly but surely get better at the range of moves at my disposal. I don't quite *master* them, but I do alright. Maybe this is the game that I'll finally defeat Allan at, I think to myself. I still boast of my win against him at Injustice when it was playable at Gamescom a few years back (something I've probably referred to numerous times on here, so I apologise!), as he is just such a natural at games that I rarely beat him. Sadly (for me), he's just as good at this as everything else, so once again I'm struggling!

Before starting the Story of MK11, I worked my way through all of the tutorials available to me, and despite my usual play-style of "forget everything you know and just button mash" when it came to the main story, I actually managed to successfully manage a lot of the moves from memory. Thankfully, as always, within the pause screen there are a couple of hints towards common moves, as well as the ability to open up the moves list and tag up to 10 moves to have them appear on screen as a reminder. This can be particularly helpful if you struggle to remember the order of buttons in a combo. 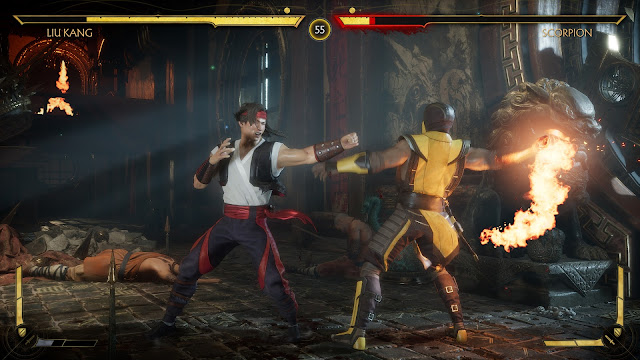 Animation is spectacular, with characters looking better than they ever have before. The difference in quality even since Mortal Kombat X is startling. Fine details in characters' faces, hair that actually looks like hair (particularly the female characters, as this is something a lot of games struggle with), and even lighting reflecting on characters faces naturally. There's also a great level of emotion shown from the characters, from sassy eyebrow races when making sarcastic remarks, the slight turning of the corners of the mouth whilst snarling at enemies, and the look of pain in their eyes during sad moments.

Cutscenes are gorgeous, further enhanced by the fantastic lighting. This, along with the rich colours and shedloads of detail make it seem almost movie-like in appearance. The story itself is deep too, following the characters in a time-travel plot where past versions of the characters have been brought to the present by Kronika. The whole spiel from movies where past versions can't be allowed to see you is totally tossed aside, with both timelines' characters not only knowing of the others' presence, but teaming up or fighting against them also. 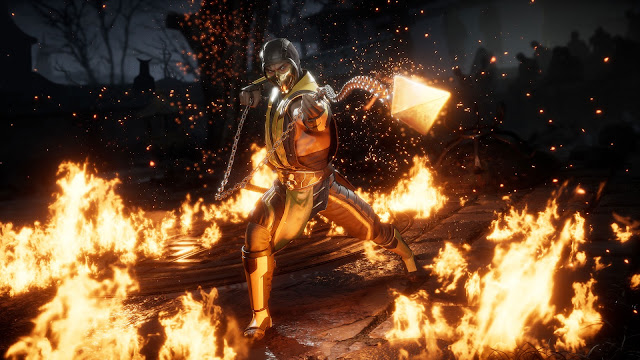 I really enjoyed seeing the interactions between past and present versions of the characters. Seeing the differences in how they have turned out, either via their actions or alliances (eg, Liu Kang) or simply through growing up, such as Johnny Cage. There's a moment of tension between both timelines' Johnny Cage, with past him stating that he'll "tap that at the earliest opportunity" upon finding out that he'll later marry Sonya Blade. Present Johnny has clearly come a long way from his previous mindset, and knowing Sonya to be the love of his life - and mother of his child, Cassie - takes great offence to his past self's disrespectful, womanising ways.

Seeing this evolution in characters and how knowing either what they were like before, or who they grow to be affects them and the choices they make. Characters are affected by their past self's actions further, in the sense that if the past self is killed, that will also wipe out the present version, as well as children (in the case of Sonya, Johnny or Jax). This is warned to certain characters during cutscenes, and makes you worry not only for the characters themselves, but also what other consequences could occur. A little nod to the impact is when past Johnny's cheek is grazed by a bullet and current Johnny gains a scar in that location. It's a cool, but worrying reminder of just how tied these characters are to their earlier selves. It's also endearing to see past versions of characters interact with their children, who are of similar ages to themselves at this point. It's an interesting dynamic, learning about and speaking with their now grown up children whom in their own timelines are still nowhere near existing yet. 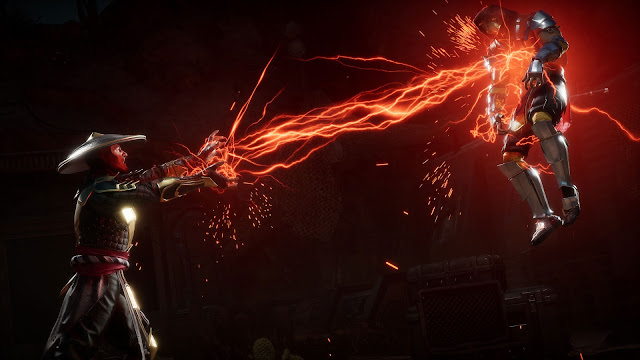 Fighting is fast and fun, with cinematics flowing into and setting up battles nicely. MK11 has improved its fighting system a great deal from the previous generations, with the special meter being tweaked and simplified to allow easier use of special moves. X-Ray moves, implemented in MK/MKX are gone, having been replaced with Fatal Blows. These can be activated when your health is almost gone, giving you a hopeful, yet desperate attempt for success. Tapping A (on Xbox) when hits land can increase the damage done - with a small crushed skull appearing below the enemy's health bar if successful - up to a maximum of three times. Similarly, when an enemy is using their Fatal Blow on you, doing the same can help to reduce the damage taken, this time denoted by a small shield under your own health bar.

MK11 has brought the return of the Klassic Towers, as well as some time-sensitive towers known as the Towers of Time. These towers can be played manually, or by using AI characters that you can personalise using unlocked skins, gear and custom loadouts. At first this was something I'd expected to not really use, after all, you want to play the game yourself, right? However, I actually really enjoy watching the AI battles. One thing I did find odd was that achievements (and presumably trophies, too) can be unlocked using the AI characters. For example, there are achievements for using two different Fatalities with each character, and these can be unlocked by your AI pulling off these moves even if you haven't done it yourself. I'm not complaining, since it makes getting all of the achievements a little easier, but it was definitely something I was surprised to see when the first one popped. 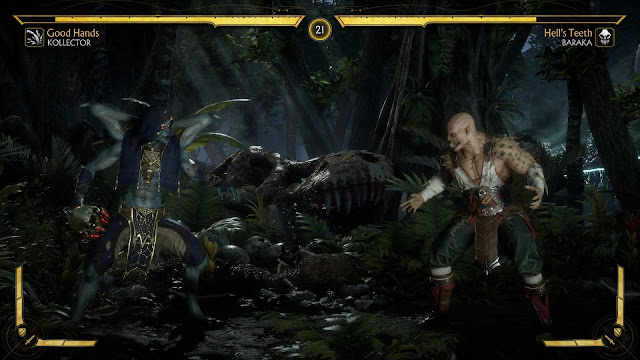 In-game currency is made up mostly of koins, gained through winning fights, completing tutorials and finishing towers. These can be spent in the Krypt, a large area accessible through the main menu that is filled with chests to unlock via varying amounts of koins; the more expensive ones being more likely to produce character skins, and other better items. Other items that can be unlocked range from concept art to materials for use in the Forge. There are also chests that require the use of hearts to open, which are gained by ending fights with Fatalities. And lastly, chests that use souls.

We have ran into a few bugs in our time playing MK11, including one that made stats revert back to zero - definitely panic inducing - and a pop up warning that my save was corrupted, resolved by just exiting the game and restarting. Some of the tutorials seemed to not register when completing the required move also, meaning it took a combination of 50+ attempts and sheer luck to clear our way through these.

Have you played Mortal Kombat 11? What do you think of it?
Let us know in  the comments below!