Something we've been super excited about for a long time is the recently released Shakedown: Hawaii, from Vblank Entertainment - who created another fantastic retro-styled game, Retro City Rampage, which was released back in late 2012/early 2013, depending on where in the world you are, and became a bit of a cult classic. We loved RCR, even buying numerous copies (from the PS4 physical release, to MS-DOS floppy disk physical releases - one of each colour *cough*).

This time round, we've moved from 8-bit to 16-bit, and you play as this guy below, whose views on business practises and how he should make money are obviously pretty twisted, and a tongue-in-cheek parody of the real world of big businesses. He's spent the past twenty years of his life living off the earnings from his book, and only now is realising how bad things have gotten after leaving the company in other people's hands while he swanned off to do whatever he liked. 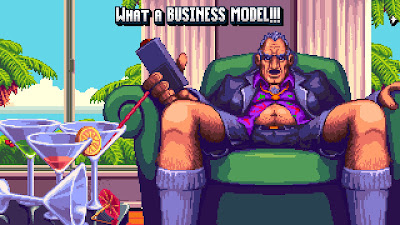 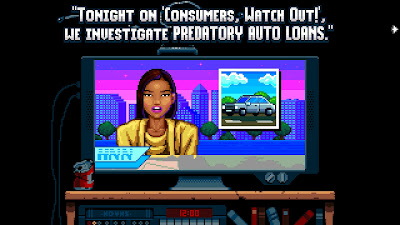 Back when Retro City Rampage was still early in production, Brian Provinciano's project drew heavy inspiration from the GTA series, with him even planning the game title to be Grand Theftendo. This works with Shakedown also, as it takes me right down Nostalgia Lane with its appearance.

The world feels alive, with pedestrians taking selfies across the map and diving out of the way of your vehicle when you cut too close. Visuals are gorgeous with the 16-bit style being an advancement from RCR's 8-bit art-style. We wonder what the next game from Brian will look like! 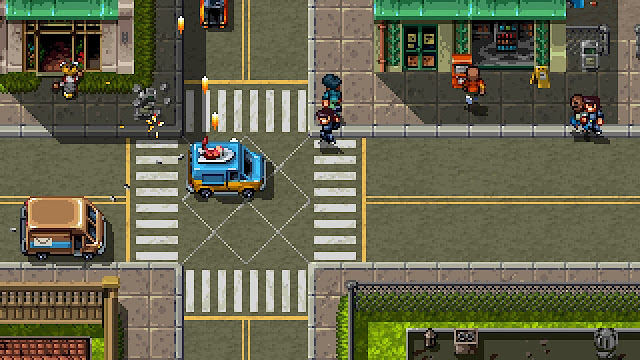 Purchasing properties is one of the staple actions in Shakedown. With over 400 buildings to purchase and upgrade, each increasing your income through means such as rent, you'll soon be taking over the whole land. The more you buy, the more you earn, allowing you to buy more and the cycle continues. It really reminds me of games like AdVenture Capitalist with this, in that click to earn sense. It's quite an addictive process, building up your collection of properties as you see the profits rolling in.

And of course, the name of the game itself: Shakedown: Hawaii. You can shakedown businesses by busting in and completing a variety of objectives. This may be by scaring customers or dealing with gang members. There's around 80 business just waiting for you to shakedown, giving you another revenue stream in the form of protection money. 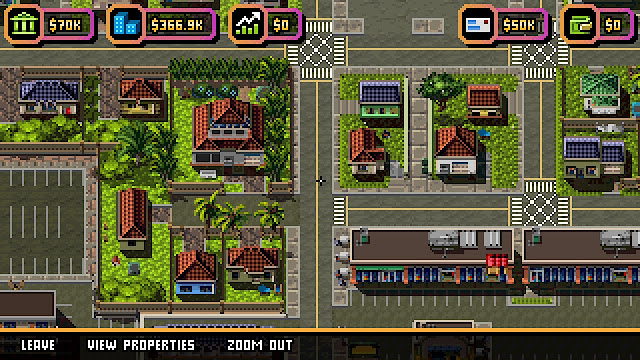 Gameplay can sometimes feel quite repetitive, as the actions you perform are fairly similar across the board; it can be good to remember to alternate between different tasks, from buying properties to spending some time working on missions, to completing challenges and aiming for a high score by mowing down pedestrians and taking out the cops.

Overall, we really enjoyed our time with Shakedown: Hawaii, and would recommend most people to pick it up, especially if you're looking for a game that keeps you entertained, without needing a great deal of concentration or difficulty. Let me tell you, after a lot of bullet-hells and rogue-lites lately, this was a thoroughly enjoyed and welcome break. 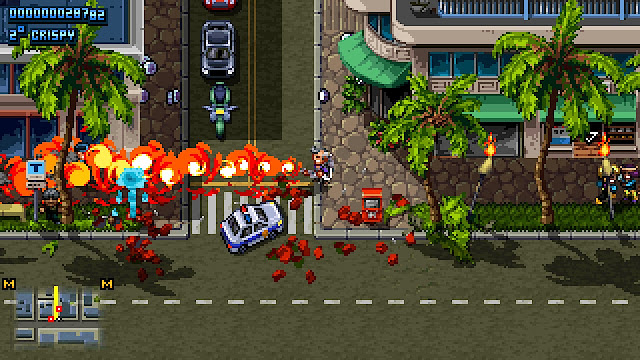 In the end, we decided to give Shakedown: Hawaii the Collecting Asylum rating of 8/10.