An homage to classic 8-bit and 16-bit ice hockey games, Super Blood Hockey takes things to a bloody new level. Developed by Loren Lemcke, the game sees you take control of an Ice Hockey team that you can customise and then strategize with to annihilate the opposition. 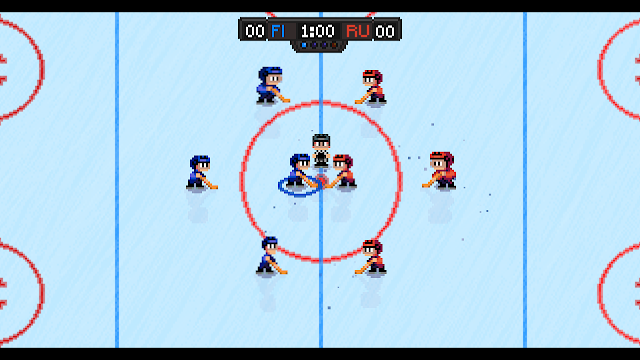 With five different gameplay modes you can choose what way you want to play. Tutorial mode does as it says on the tin, it allows you to practise and learn how to play (and fight!). Exhibition is a fast-paced mode that lets you play a quick round up against another team. If you just have a short time to play (particularly if out and about and playing the handheld Switch version), then this is the option you're most likely to go for. Tournament mode plays like you'd expect: you have your team and have them go up against other teams, knocking them out of the tournament one by one with your end goal being to win the whole tournament. We've also got Challenge mode which has a variety of different (and often pretty difficult) tasks for you to complete.

Franchise mode starts with a rather funny intro of you waiting in line to register a team for the International League of Blood Sports. The guy taking your application is sitting at a desk with two mobsters alongside him, with one pointing a gun at him while he types away furiously. Blood stains the floor beneath your feet.. are they gonna shoot me? Nah - turns out you can't afford to register so they're just gonna whip a kidney out of you instead! Using the money from selling your kidney (unwillingly), you can now afford a full building for your team and you are swiftly given the option of a tour around the facilities. There's so many levels of shady going on within this organisation and it is hilarious. Players (inmates) are bought from a catalogue and have varying degrees of skill and brain damage, which are both things you must consider when making a purchase. Players can be sold on also, as there is a maximum number of players you can have so sometimes a tactical sale will free up space to add better players to your roster. 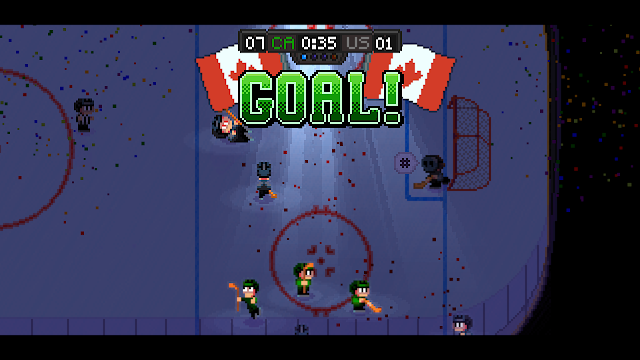 Players can be buffed up beyond their starting stats by making them train and you can do everything from controlling their diets to sending them off to the health bay to recover (and lose some organs in the process) before ultimately discarding their corpses if they don't. It blends the dark humour well within the context of the game, and had us frequently laughing at the absurdity of it all.

In absolute honesty though, I really struggled with Super Blood Hockey at times. I couldn't quite succeed at anything. I don't know if my lack of skill at other sports based games like FIFA played into this as I just could not aim at the goal without panicking and then missing. I watched Allan play this earlier today on Xbox One, and he was scoring left, right and centre and didn't even break a sweat while doing it. Success may vary! 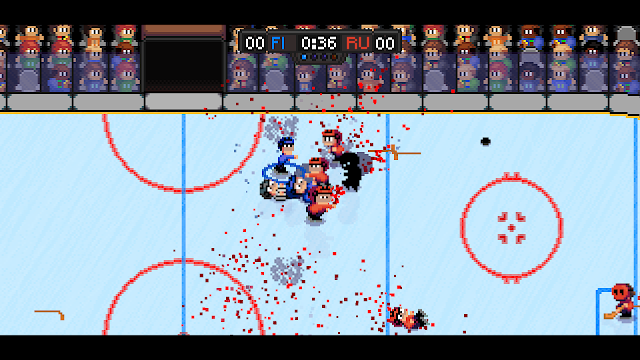 Where Super Blood Hockey really shines further is when you play with friends and/or family. You can play in 4-player co-op, each controlling separate members of the team. This is definitely a game well suited to parties or having friends over, and games are fast-paced enough that it keeps you interested even if you're just watching someone else. An online multiplayer would have been a fantastic addition to the game and is something I think they missed a beat on.

The pixelated art style keeps the game arcade-y and fun while maintaining a great backdrop for blood splattering over the ice during a brawl. The dark humour and violence just work so well with the retro graphics. Simple controls make the game easy to learn, at least in Allan's case, and the wide variety of gameplay modes keeps things fresh. 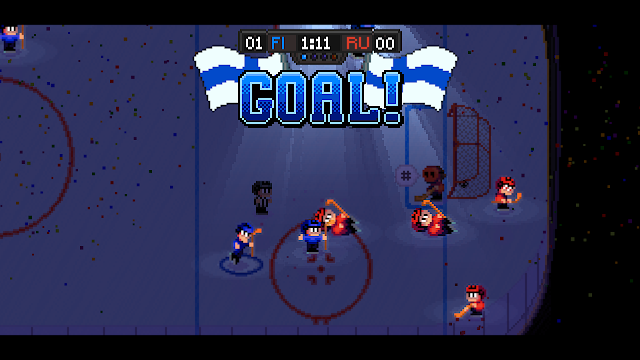 We were lucky enough to be able to review this on both Nintendo Switch and Xbox One, and each version has a lot to offer. It's a cheap game (at less than £15) with a lot of replay value so if you have both consoles and you enjoy the game, I'd recommend to pick it up for both. It's great for quick games on the Switch when out and about in handheld mode, and Xbox has all of the achievements to unlock and bump up that gamerscore!

In the end, we decided to give Super Blood Hockey the Collecting Asylum rating of 7.5/10. 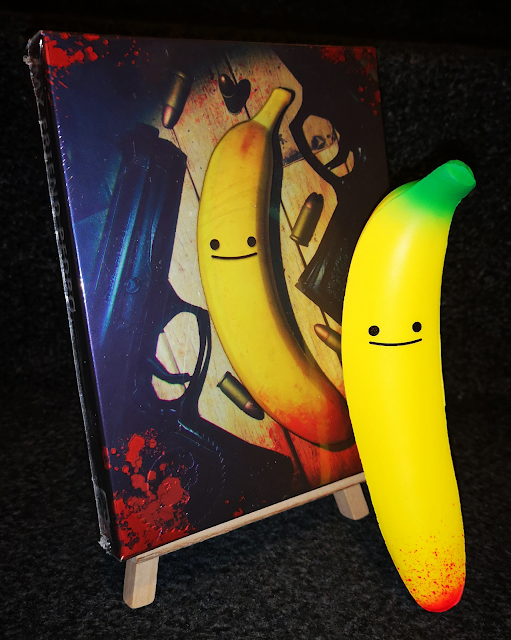