Developed by Matt Dabrowski and published by TinyBuild, Streets of Rogue is just the kind of roguelite I've been waiting for. Definitely not quite as panic inducing as the likes of The Binding of Isaac, this game allows you to be a little more meticulous in how you go about things.

Missions can be completed in a bunch of different ways, and certain characters may have an edge over others in particular levels. 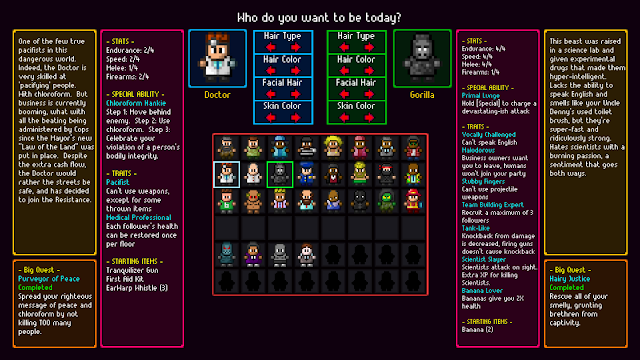 There's a decent selection of characters with various Abilities and Traits, as well as different items to begin a run with. Extra characters can be unlocked by successfully completing the unlock requirements, which can be anything from completing a specific level or freeing a captive within a level, to making it through an entire level without alerting or killing anyone.

Basic customisation of the characters gives you a little bit of input towards how you want to look, from changing hairstyle and colour, to choosing whether or not you like the bearded look and picking a skin colour. When selecting a character, you'll notice that each one has a "Big Quest" that they have as an additional objective. These are specific to each character type and usually add a little more difficulty to completing a run. It's an optional quest but it's definitely one I'd recommend going for as the XP boost each level is pretty good if you achieve that level's requirement. 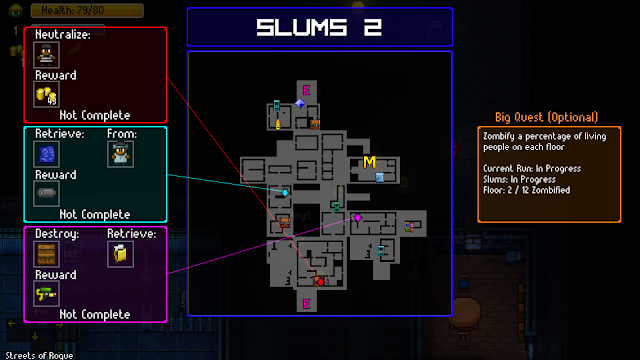 Pressing Y (on Xbox) brings up the map, with a nice little breakdown of the level's missions as well as the Big Quest details. Points of interest are marked on the map with their symbols from chests to be unlocked, a yellow M for a mission-giver (optional missions to gain Chicken Nuggets, the game's currency for buying extra stuff for the item pool and new traits, etc).and of course the colour coded arrows for the main objectives. There's not a whole lot of depth to the story itself, but the over-arching Big Quests for each character and having to change up your playstyle depending on the character class you choose kept me thoroughly interested.

As always, I love the pixel art style, and the soundtrack is catchy and really suits the style of game. By far, my favourite thing included in the game is the variety of status effects that can be activated throughout levels that have this mutator applied. As shown below, going Giant is amazing and allows you to just obliterate anything in your path - but be warned, it won't last long before you get another effect (and that could be something bad like being weak!). This added a fun layer to the game and kept things feeling fresh throughout. 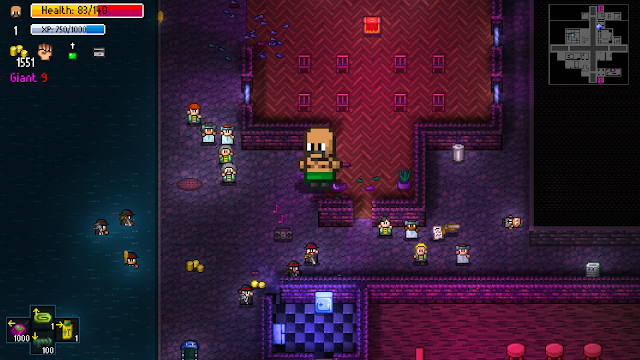 In the end, we decided to give Streets of Rogue the Collecting Asylum rating of 8.5/10.

Have you played Streets of Rogue yet? What did you think of it?
Let us know in the comments below!