Originally released in 2016, Cybernate's Super Mutant Alien Assault has now made its way to Nintendo Switch. It suits being on this platform, as this is definitely a game that fits with that pick up and play anywhere mindset. There are three galaxies with four levels in each, culminating in a boss fight on the final level of each galaxy. Between the fact that it's so easy to just play for a bit when you find yourself with a bit of spare time, and everything taking place within a single screen (no side-scrolling here folks!), SMAA truly feels like it was meant to be played on Switch. 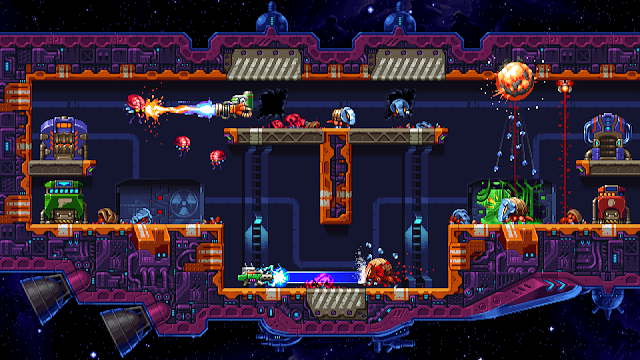 There's not much in the way of a story. I mean, there is, but it's pretty much just a case of go out there and kill every alien you see. The game is fast-paced and keeps you on your toes as you have to replenish weapons and bombs, whilst ensuring to not trap yourself in a corner (leading to inevitable damage). As you progress through the levels you can smash open boxes for upgrades - such as double jumps - or new weapons.

Each level can have differing objectives, which helps to keep things from being quite as repetitive. Sometimes your goal is to just clear all aliens from a level, and other times you will be repairing generators. The low overall number of levels means that the entire game can be completed pretty quickly, but the replayability still stands for a fun time with friends. 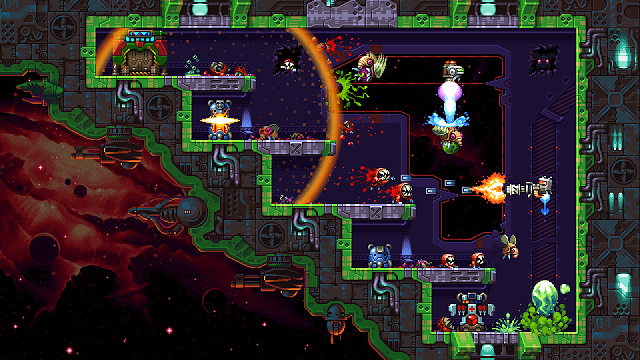 Local co-op is a nice touch, as too many games stray away from that nowadays - but unlike couch co-op in The Binding of Isaac, etc. if one of you dies, you both have to start again *sad trombone*. Again, the portability of the Switch comes into play nicely here, as you can play two player by having a joy-con each with the screen in between you. It's not always the most comfortable or best way to play, but if you're gonna be on a flight or don't have much else in the way of access to a TV screen, it does just fine.

The music fits well and is actually surprisingly catchy, and the art style is really brights and everything pops on screen. Clean lines add an extra layer of definition to what normally can be quite a faded or blurry appearance with pixel-art (not that that's a bad thing!) so it really makes everything stand out well. 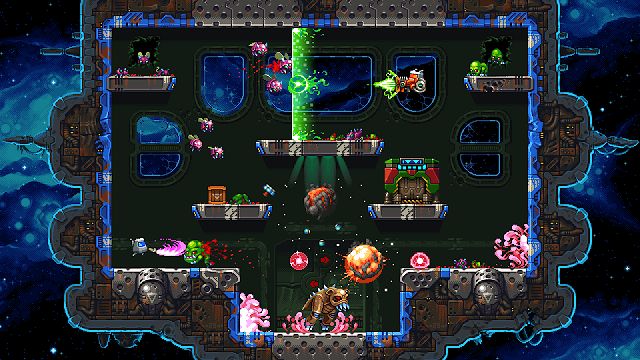 In the end, we decided to give Super Mutant Alien Assault the Collecting Asylum rating of 7/10. The cheap price point (just £7.99) makes it a no-brainer to give this a try.

Have you played SMAA yet? What did you think of it?
Let us know in the comments below!