Okay, okay... I know what you're thinking. That's a helluva clickbait title. And I suppose you're right, but this post is about confessions - or more specifically - collecting confessions.

The first of my collecting sins is that I am so guilty of leaving discs out of their cases for far longer than is necessary. If you've seen one of my recent Instagram posts, you'll know this. And I'm ashamed to admit that it's never just one pile of discs, or even two piles of discs. It's always ungodly amounts of discs in multiple piles, as well as a few random discs slotted in here and there for good measure. My thought process behind the random single discs is "I'll sit that there just now, since the case is on that shelf/near there, and I will put the disc away later". WHY!? I hear you ask. Simply put, I can be a lazy bastard at times. It's not one of my finer qualities, but knowing I can be a lazy bastard is better than just blindly being one. At least I'll sometimes attempt to circumvent this and just tidy as I go. But not enough, no. 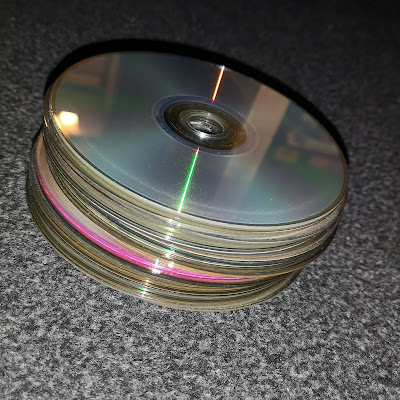 Typically, I'll start the long mission of assigning discs back to their correct cases at the precise moment that I decide to take photos of things in the collection and discover that the disc is missing. Frustrating, since this then drags me away from my original plan and putting them all away takes forever. Oh, or my other favourite - when you go to put on a movie or game, but the disc inside the case is an entirely different one than expected. Jeez, this one drives me up the wall (and yes, I know - I'm the cause of it!) since it's never a simple process to resolve this. It's never as quick and easy as "Oh, Spider-Man is in the Red Dead Redemption 2 case, so the RDR2 case will have Spidey". It'a always X is in Y's case, Y is in Z's case and Z is nowhere to be seen. Wait, and where is A-W?

Another thing I'm guilty of is buying duplicates of items I've already got. Granted, this one is definitely not as common - and it's never for high value items (that would be heartbreaking). It's usually a Steelbook, or a cheap game. We've ended up with a number of doubled up releases in the past: Jessica Jones Steelbook, The Wolverine Steelbook, the Jurassic World Lego game to name a few, and 9/10 times the duplicate will sit in the shelves for months before realisation hits. A few times where we've had damaged items too, we've contacted to ask for replacements and they've allowed us to keep the original as well as having a replacement sent. I suppose these don't really count as duplicates as such since the damaged copy isn't the preferred choice, and I'd have been happy to return for the replacement. When this happens, we usually just give the damaged copies to friends who dabble in collecting too. 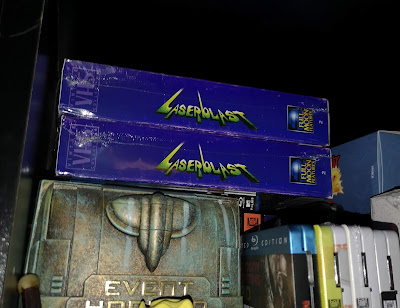 In a similar vein to the bad memory causing duplicate purchases, it also causes me to frequently lose track of items in the collection. There are things that we know we have. We have photo proof, and remember having the items (and if you know us, we never sell our stuff), but just can't seem to locate them in the shelves. I've got a tendency to rearrange things in the shelves at random, deciding roughly what I want to do and then just winging it. This means it's easy to forget where everything is, as I might remember the shelf it was on for the better part of a year or more, but I've since moved it 6 times.

As I'm sure other collectors understand, it can be quite difficult to place things in your collection. Everyone has their preferences. Some like to display everything in alphabetical order. Some like to display things grouped by franchise, genre, platform or even by Director or Developer. You might have a preference to break it down into further groupings. Ours is a bit of a mish-mash at the moment due to constant rearranging . The rearranging has mostly been a necessary evil in order to get things off of the floor and onto shelves, so there's been a lot of rotating items to maximise shelf space - with less focus on actually displaying the items. 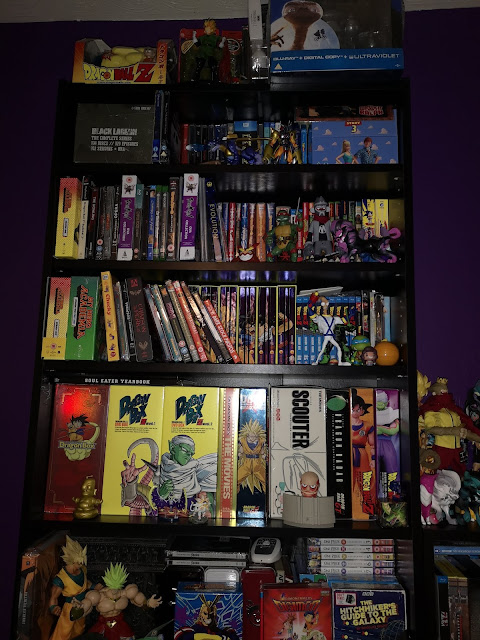 When we first moved in here, we had a basic layout. Games sprawled out across one side of the room, and blurays (movies/TV series, etc.) had the other side. Wtihin those sides, we had games broken down, roughly, by platform. Then on the individual shelves we would try to group things by franchise where possible. So Mortal Kombat had a shelf, as did Halo. Games like Catherine caused me some trouble as I had two editions of the same game, but a different platform for each (as 360 had one version of Catherine on the cover, with PS3 having the other). So do they get placed together, based on same game? Or apart, based on their platforms. It caused a bit of hassle when trying to get everything on the shelves, but I just had to learn to loosen up a bit with that.

Even this week, when I've been moving things around I've been unsure about placement. I rearranged all of the bluray Steelbooks, placing them in alphabetical order. Some Steelbooks were pulled away from this method: Disney Steelbooks go on the Disney shelf, Mondo Steelbooks have their own space (but oh God, what do I do with the Disney Mondo Steelbooks!?), MCU Steelbooks are in release order, and Arrow releases go on the Arrow shelf. Aaand after doing all that, I stumbled upon a few other Steelbooks placed randomly around other shelves. Those ones I'll figure out another day - I simply cannot be arsed rearranging the same shelf again. I'm lazy. 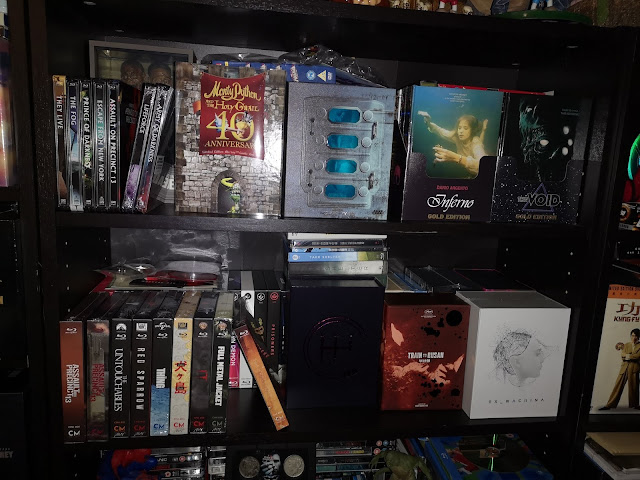 This burst of rearranging things spurred from wanting to take pics of stuff from the collection for my Instagram - as you may have seen - and realising that I couldn't find certain things. Again, these are things we know we have. They're just buried too deep in the shelves to locate. I wanted to take pics of all of my Mondo Steelbooks, but one or two of the Disney releases that I have (although, admittedly I haven't gotten round to picking them all up yet) were nowhere to be seen, so scratch that off the list. I then decided that it's time to do a big post on all of Cinemuseum's stunning releases (as I'm up to date with all of those), but Shanda's River has escaped me. I know it's in the shelves somewhere - heck Red Sparrow was hidden away for a bit too, but I realised how blind I was when I discovered it just above its new intended location, despite having checked there 10 times prior. This links in with the misplaced disc issue too, where I sit a single, lonely disc on the shelf it should be returned to, and then whilst moving everything about it ends up somewhere else, never to be reunited with its case. Or at least not anytime soon.

Lastly, and this one isn't one that we personally consider to be a collecting sin, but we know plenty of other people do: opening our stuff. Many, many other collectors (and maybe even some of you reading this) believe that these items shouldn't be opened. It might be that they want to prevent items from decreasing in value, or they just simply prefer the look of sealed items. For us, however, we love to open everything up and see all the parts and it makes it so much better to display certain items rather than just the (oftentimes boring) outer box. We do have a fairly large number of sealed items at the moment, purely due to having too many things that came close in time to each other and so as each new item arrived, the ones before were put onto the back-burner, with the intention of "oh, I'll unbox and review that shortly". I will definitely get around to unboxing and reviewing everything - eventually (key word) - but I probably need to pick up some new equipment first.

So if there's anything you'd recommend (or if some lovely companies are reading this and want to send anything my way, I'll be forever grateful!) please let me know :) 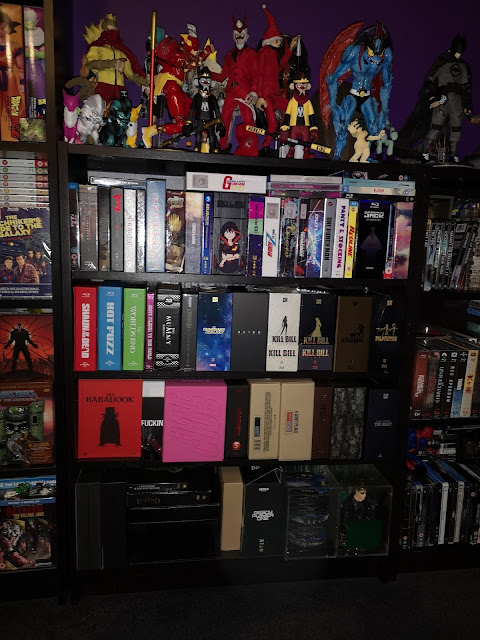 So come on, we can't be the only guilty parties here. What collecting sins have you committed?
Let us know in the comments below!