Felix the Reaper is a fun puzzle-based game developed by Kong Orange. Currently available on Xbox Game Pass, you can dive into the game and help Felix in his quest to be a great reaper and be united with his star-crossed love Betty (who just so happens to work for the Ministry of Life) in what the developers describe as "a romantic comedy about the life of Death". 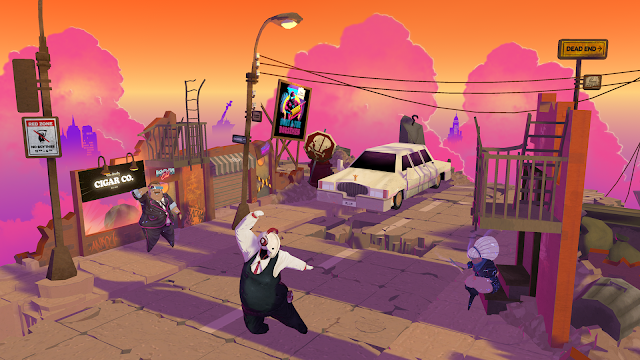 It boasts a very unique style of play, a puzzle-game unlike most of the other puzzle-games I’ve played lately, utilising a sundial and strategically angled shadows in order to keep you shaded from the sun. Sunlight can be controlled to a certain extent, with the ability to rotate it 90°, potentially opening up new paths to reach your target. Being hit with sunlight, and subsequently dying, the level continues with little in the way of punishment… until you get to the end of the level and realise that that one unnecessary death cost you points in your ranking. The overall premise is simple, put people in harm’s way to allow their souls to be reaped, and everything will be fine. Do things faster or in less steps, and you’ll get a better score.


It has an original soundtrack that is very well suited to the game and Felix hilariously dances along to the beat .Similarly, the art style is gorgeous, and works really well with the way that levels are built and played, and character models are cute yet interesting. It also has a very whimsical story, with lots of additional information provided throughout, from the files given to you at the start of each mission - aside from the fact that the first one lists the wrong target, but this just adds some hilarity to the mix - all the way through to small cutscenes.

Despite all that, something feels amiss here. I can’t quite put my finger on it, but something feels unnecessarily frustrating when you play, and instead of it feeling like a fun, challenging frustration, it’s an exasperatedly fed up one. At first, everything had a nice, fresh feel and each level felt difficult yet relaxed but as the game progressed, this took a turn for the worse. The same levels that previously felt fresh and interesting feel tedious and repetitive, with very little in variety between each level.

In the end, we gave Felix the Reaper the Collecting Asylum rating of 6/10.

Have you played Felix yet? What did you think of it?
Let us know in the comments below!