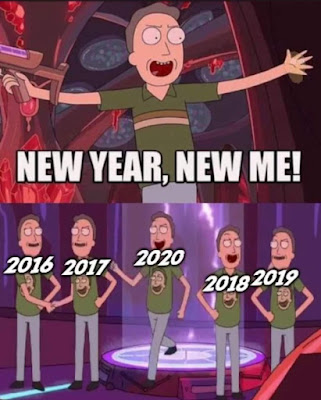 2019 is finally over, and 2020 is here. Every year is the same, we aim to be better or do more of this, less of that but it never amounts to much. Everything from October to December gets pushed further and further back under the premise of "we'll do it after the New Year" whether that's dieting, or a better skincare routine or even just on being more focused on a task - Entries to the Asylum anyone?

I'm just as guilty of this as the next person, and it usually always get blamed on work, the kids or the new puppy, since obviously those all take up the majority of my time, but I'm to blame too. I'm a champion procrastinator, a lifetime habit of putting things off combined with a severe inability to focus on one task at a time. I finally get around to doing something, and find myself moving onto something else halfway through (Allan can vouch for this based on my tidying methods!).

For the website, my main aim is to get things back on track with not only Entries to the Asylum, but with my reviews as well. Things were quite slow and steady for a while as we hadn't had a lot of things to review that overlapped, and then all of a sudden we ended up with almost 20 things to review. By no means am I complaining, I love that we are slowly but surely getting to a stage now that we are being offered more games and movies to review, but all of those in a short space of time kinda caught me off guard. To prevent me from being so overwhelmed going forward, I have devised a schedule of sorts to give me scheduled time to play and review games each week so that I always get the time I need to do everything that needs to be done - currently it's a fight between me and the kids as to when I can get on the Xbox or Switch, as even though there's two of each at home, inevitably they both always end up wanting to play whatever I'm on.

Right now, I've got a bunch of loosely written reviews that need neatened up and finished properly, as well as be formatted/have pictures added, but having so many has flummoxed me a bit. I don't want them to keep dragging out, so I aim to sit down this weekend and get them all finished and posted. A lot of them are fairly overdue, but I don't always get the games until release day (or sometimes after) so having to then play them holds back the review also.

For 2020, I will stick to my schedule so that my reviews and other content don't suffer, as ultimately I want this place to grow and continue to move onto bigger and better things. I will also continue to post more on social media to draw people in, as I feel that while I have a decent following on Instagram, a lot of those followers don't then move to here to see my content.

The schedule is currently only focusing on my side of things: playing games, writing the reviews, and doing other content for the site (and eventually YouTube). It doesn't yet fall into your side: content being uploaded. Eventually I'll figure out a full schedule for stuff that will be posted - reviews will be outwith this anyway as they will just be when embargoes drop/they are ready. Previously I've had plans for Entries to the Asylum being done on a Sunday, although I think I'll now move this to a Monday, covering the previous Mon-Sun. And I did a Thoughts on Thursdays segment at one point, which I think I'll still incorporate, but not as rigidly as every week - just when I have something worth posting!

I'm looking forward to seeing what 2020 will bring, and can only hope for it to be a bigger and better year for us than ever before.

What are you looking forward to in 2020? What would you like to see from Collecting Asylum?
Let us know in the comments below!