Redro Games’ Mushroom Heroes is a 2D puzzle platformer with 16-bit graphics, where you take control of three different characters: Jumpi, Yuppi and Dombi. Each of the Mushroom Heroes has their own special abilities which have to be utilized in order to progress through the game. Their world, Boduria has been ruled by King Bodur for 1000 years and he needs your help, as the evil Gaddar - the only poisonous mushroom in the land - has come to poison everyone to be just like him.

Previously released on Steam and mobile platforms, it has finally now come to console with a Switch release. Learning to play as three characters with unique abilities is a lot of fun, and you quickly get the hang of just which mushroom you need. Jumpi, the red mushroom, has a higher jump (duh) and can float longer in the air; helpful when you need to get past spikes on a lower level. The green mushroom, Yuppi, has a bow and arrow that he can use to take down enemies as well as detonate bombs. And finally, we have Dombi the blue mushroom, who has a shield that can be used to block enemy projectiles. He can also push/pull objects to clear the way, allowing you to reach other areas throughout the levels. All three mushrooms can be stacked on top of each other in order to gain access to other places or reach necessary items which adds another element to the puzzles. 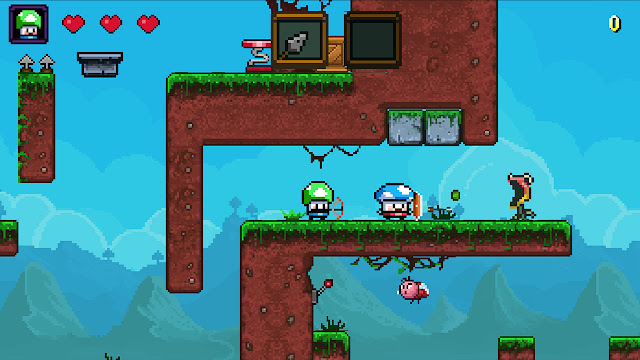 Art style is very pretty, with bright poppy colours and a very simple aesthetic. Everything is well defined, and it is easy to see everything going on on screen. Sound design is fairly well suited too, and quite catchy. Learning how to navigate levels and when each character is needed is a lot of fun, although sometimes you'll find yourself stumped as you think that you need to use arrows to get past a block, when actually you need to push them (and vice versa) but this just adds to the challenge.

Controls are very simple, with trigger buttons allowing you to switch between the three mushrooms. Utilising all three characters and learning where best to use their abilities is a big part of playing, and gives a great challenge to the levels as you figure out how to progress on your quest. Being able to quickly switch back and forward is great, and with each character only really having two buttons required (one to jump and one for their abilities), you won't find yourself getting too confused when switching. 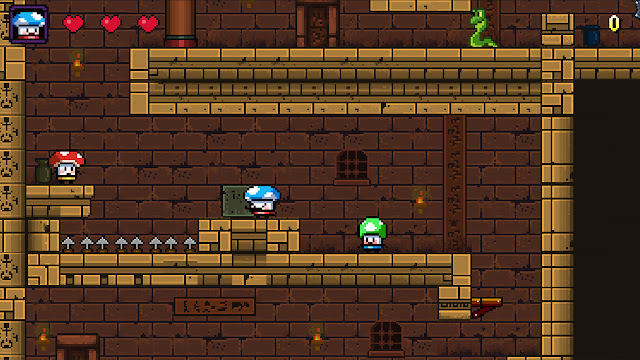 With 38 levels spread across multiple worlds, there’s an okay amount here to keep you occupied, but I would definitely have liked to have seen more variety in the worlds. The ability to team up with two friends is a missed opportunity too, as having this be a co-operative mission would have worked so well. I don't see them ever doing any massive upgrades to this game, but if they do, that's one thing I'd like to see - whether it is online or couch co-op only. At just £5.50 on Switch it’s not overly expensive, so organising with a couple of friends to chip in for a copy if playing together would have been an absolute steal. Either way, it is a cheap and cheerful game so the price isn't anything to be annoyed about.

It’s definitely more of a casual game to play to pass the time than one that completely sucks you in for the story or anything as there's no dialogue between characters, but we still had fun here. It's a great choice for kids too, as the puzzle elements keep it challenging enough to hold their attention but without too much difficulty of some other retro-inspired titles. 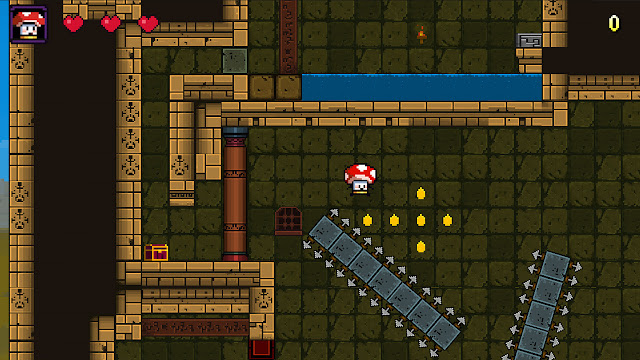 In the end, we decided to give Mushroom Heroes the Collecting Asylum rating of 7.5/10.

Have you played Mushroom Heroes yet? What did you think of it?
Let us know in the comments below!

Thank you to Dolores Entertainment for the Mushroom Heroes Switch review code!
at May 01, 2020