The Eternal Castle [Remastered] is a new game that tries to be as faithful to the source material as it can be - just one problem - there is no source material. The Eternal Castle, which is stated to have released back in 1987, seems to have never actually been released at all. Developed by three independent devs: Leonard Menchiari, Giulio Perrone and Daniele Vicinanzo, TEC is what they describe as “something that gets as possible to the dream-game they wish they could’ve played when they were kids.”

Straight off the bat, loading up the game can feel just a tad jarring. The white text scrolling against the black background, simulating an old PC boot process, followed by fairly difficult to read text describing the backstory to the game’s plot. You can then choose to play as “Adam” or “Eve” in an option that doesn’t immediately register as requiring input. It’s an odd, yet familiar feeling for starting the game; having played plenty of similarly-styled games in the past. 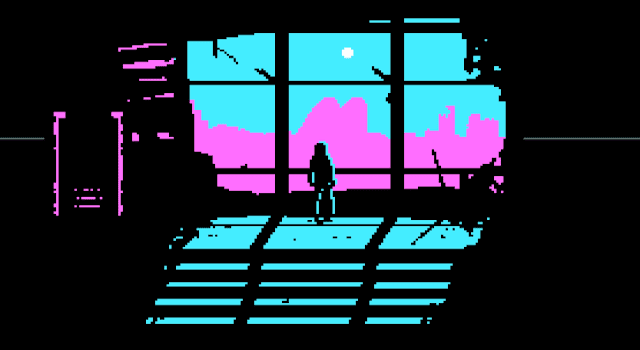 If you’ve played similar games from this “era”, such as Another World, then you’ll kinda know what to expect here. Plenty of wandering and trying not to die by unexpected causes - which will definitely happen a lot. The colour scheme, consisting mostly of black/white alongside some blue and pink tones works really well and gives a shadowy illusion to your character, however this can also be your downfall as it can lead to plenty of simple deaths just by not noticing something until the last second.

The atmosphere is quickly set and a very ominous feeling of impending doom lingers as you try to figure out the best way forward. Three locations are given for you to choose from that can be travelled to using your aircraft, each with very distinctive threats and overall tones. One area has you up against strange humanoid creatures in a cemetery, whilst another has you face off against another human in what can only really be described as an arena style setting, before falling into another area and being gunned down almost instantly - in my case anyway.

The art style is unquestionably one of the biggest things that stand out for me here. The simple colour palettes, and the harsh lighting and shadows obscure things just enough to leave a lot open to your imagination, and this really deepens the impact of some of the creepier, more unsettling moments during the game.

The janky controls, whilst intentional due to their being a massive thing with 80s video games - severe input lag combined with the need for animations to follow through without interruption - are frustrating and left me feeling stressed out with trying to get through The Eternal Castle. Some areas are more frustrating than others, with them being able to be played in any order, this doesn’t necessarily mean there isn’t an optimum order for playing.

Some areas of the game had my eyes hurting quite a lot, such as the short nightclub segment (shown above) as the bright colours having the strobing effect made me feel almost certain that I would have a seizure (and I don’t have a history of seizures!). The colours didn’t give me any issues elsewhere, just whilst strobing so I think it’s more the strobe effect that was the problem - but just enhanced by the bright colours as I don’t seem to have an issue with strobing under normal circumstances. I didn’t notice any epilepsy warnings when starting the game, but this may be something to bear in mind if it would affect you.

At £14.99 on the Nintendo eShop, it’s a fairly cheap game but one I’d only recommend if you are a fan of these styles of games. It’s a little too difficult and frustrating for an average player, so may feel like a waste of money if you struggle to get anywhere in the game before giving up.

In the end, we decided to give The Eternal Castle [Remastered] the Collecting Asylum rating of 6/10.

Have you played The Eternal Castle yet? What did you think of it?
Let us know in the comments below!

Thanks to Leonard Menchiari for The Eternal Castle [Remastered] Switch Review Code!
at July 31, 2020