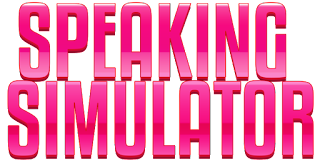 Affable Games’ Speaking Simulator is the latest in the vast genre of simulation games. Often in these games you might find yourself working on car engines or driving tractors - in the more true to life sims - but sometimes you’ll find yourself doing something far more humorous, like speaking.

Here you play as a loosely customisable robot character (including options of your chosen “junk”), trying their damnedest to infiltrate human society whilst figuring out how to accurately control a mouth and tongue. 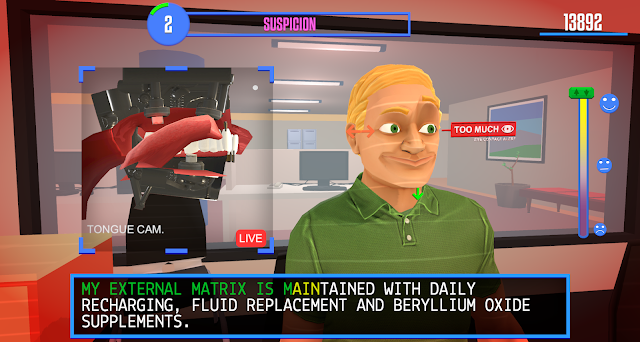 In order to succeed, you must carefully control your lips and tongue to speak to the humans you encounter whilst not arousing suspicion due to too many errors. The more errors you make the more overloaded your poor little robot brain becomes, leading to sparks flying. From your face. Not with the person you’re on a date with.

The thumb sticks acts as the controls of the lips and tongue, allowing you to open/close and widen or pucker your mouth on command, as well as flop your slimy tongue around as you try desperately hard to push the flashing buttons lining the roof and base of your mouth without completely annihilating your pearly whites.

As you progress, you gain the ability to purchase various upgrades which will enable you to smile or frown during social interactions. These add an extra layer of play, alongside additional challenges. Trying to keep your tongue in check requires a lot of brainpower here, so adding in other wacky controls makes things even more hilarious and gruelling.

We had a lot of fun with Speaking Simulator, and throughout the ten levels which span dates, doctor visits and job interviews you can feel the sheer awkwardness and shedloads of humour injected right into it. It made it a thoroughly enjoyable time and one that gave us a lot of laughs along the way. It doesn’t have a whole load of replayability unfortunately, as whilst it’s promoted as every conversation being unique due to the infinite variety of facial movements, these will mostly all leave you feeling the same the second time around. It’s reasonably priced for what you get, on the Nintendo eShop for £14.90, but is also available of Steam for those of you who prefer to play on PC.

In the end, we decided to give Speaking Simulator the Collecting Asylum rating of 7.5/10.

Have you played Speaking Simulator yet? What did you think of it?
Let us know in the comments below!

Thanks to Affable Games for the Speaking Simulator Switch Review Code!
at July 28, 2020