Co-op party games are always something of a hit in our house: we have a lot of fun with them, and they’re usually straightforward enough that the kids can both join in without feeling like they are totally outmatched when playing against us at free-for-all. Boomerang Fu is a recent release that caught our eye due to the adorable characters and interesting visuals. You play as one of twelve available food-and-drink-based options, ranging from avocado to sushi, to a jittery cup of coffee, each wielding a boomerang in order to give their enemies the chop.

The team over at Cranky Watermelon had us intrigued by what they had to offer with Boomerang Fu - on one hand we were very excited by the idea, but on the other we were saying to ourselves “another fruity game?” as there seems to have been quite a lot of those in recent months. But even though this initially seemed like a downside, the cute characters are actually a huge draw as not only are they appealing but it actually makes some sense as a boomerang slices cleanly through Mr. Banana and shatters little Coffee Bro, names they’ve become known as in the Asylum. 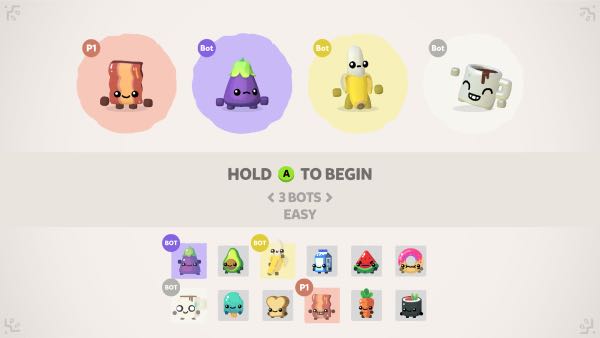 As well as being playable as a multiplayer game, you can also play on your own with the help of some bots that can be tailored in their difficulty. Other options available allow you to change the type of game you play from free-for-all to team based, or to make it a battle over the Golden Boomerang. Rounds are generally fast, with a lot of frantic action going on on-screen. It’s a perfect game for parties, and causes a lot of laughter as unexpected deaths occur due to environmental changes - and simply being in the wrong place at the wrong time. Eva has accidentally killed me (her own teammate!) in more rounds than you’d think possible, simply by flicking a lever and causing me to be flattened by moving blocks. Having rounds feel so unpredictable is great, as it really ups the challenge, whilst also keeping it as anybody’s game so a win really feels special.

Different power-ups can be picked up during each round, and these add brilliant effects to both your boomerang and the round in general. Some of these might affect how your boomerang works, such as leaving a trail of ice or setting foliage on fire, sometimes even causing multiple boomerangs to be tossed or explode on impact. Some power-ups give you assistance in the form of a disguise (which transforms you into a random piece of set-decoration when you stay still) or a shield, and sometimes the whole round will change into a Battle Royale style mode, with a decreasing area of play being available - leading to death for all who remain outside the square. This all adds even more hectic-ness and hilarity as everyone squeals their way out of the path of projectiles only to be affected by the impending explosion or being suddenly out of bounds.

At £12.49 on the Xbox Store, it’s not the absolute cheapest of party games we’ve played of late, but for a still relatively cheap price, you definitely get a whole lot of enjoyment out of this title. There’s plenty of replayability, and whilst there’s only a few different game modes available the rounds are just so fast-paced and fun that it doesn’t feel like it’s overly missing anything.

We’ve had a great time playing Boomerang Fu and can see it being a regular one to play with the kids as they are absolutely obsessed with it, and we can’t say we blame them! It is just so addictive to play “just another round” and the gorgeous art style and funky soundtrack really help to keep you interested.

In the end, we decided to give Boomerang Fu the Collecting Asylum rating of 8.5/10.

Have you played Boomerang Fu yet? What did you think of it?
Let us know in the comments below!