Phobia Game Studio’s Carrion is a new, but totally different kind of horror game in that you play as the monster. It’s an interesting take, subverting the usual tropes of horror and allowing you to see from the opposite point of view as you worm your way through the vents and creep up upon unsuspecting victims – or as you smash through doors and watch the humans flee in terror from the humongous alien blob hurtling towards them.

As soon as Carrion was shown at GDC 2018, we were immediately intrigued. And when it was further shown during Devolver Digital’s conference during E3 2019, we could hardly contain our excitement. As massive fans of horror and all that is gory, Carrion scratched an itch that we hadn’t fully realised we needed. 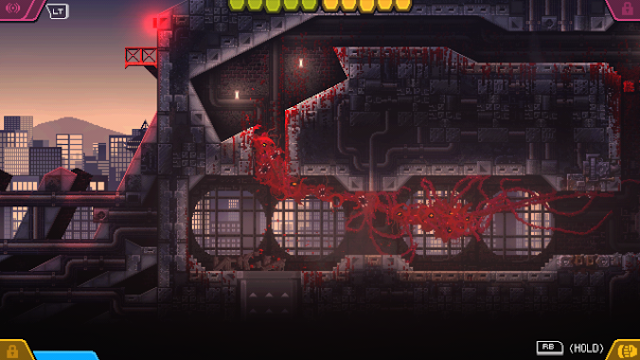 Carrion’s art style is pixelated and works very well with the setting, allowing the fleshy alien to lurk in the shadows and still have enough detail to keep it interesting. The soundtrack done by Cris Velasco is fantastic and really stands out well. It has a haunting, almost threatening vibe to it, but oddly has this juxtaposed tone that is very soothing and mellow to listen to. It’s really difficult to describe, but I thoroughly enjoyed the soundtrack which you can listen to in full on Spotify.
Movement feels so satisfying, especially when lunging towards a target at speed, or stretching out your fleshy tentacles to grab a nearby human, ripping them to shreds with ease. The sound design ties in so satisfyingly well with your movement, from the absolute terror in the screams from all around the lab, to environmental noises of crunching metal as you pull doors from their hinges. 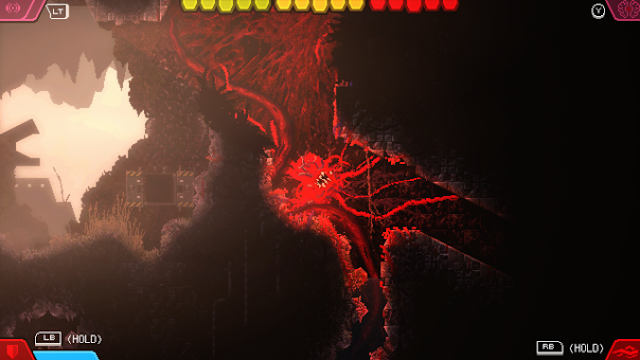 As you consume enemies, you will continue to grow. Additional upgrades can be gained which change your skills, allowing you to utilise web-like abilities, or to unleash spikes from your ever-growing mass. As well as playing the monster, you can also use an ability to birth a small wormy-blob that can infect and take control of humans, attacking others with the element of surprise.
There’s a lot of fun to be had in the short amount of time it takes to complete Carrion, but there’s also a fair amount of monotony as well – traipsing back and forward, trying to figure out where to go next. The main route is fairly easy to follow, but on occasion you’ll take what you think is a shortcut and send yourself on a loop to get back to where you were. With no map to guide you, getting lost can become an absolute nightmare. Areas can be locked off on first passing, so backtracking to see what’s in there after you can get them open is sometimes hit or miss on whether or not the journey back was worth it. 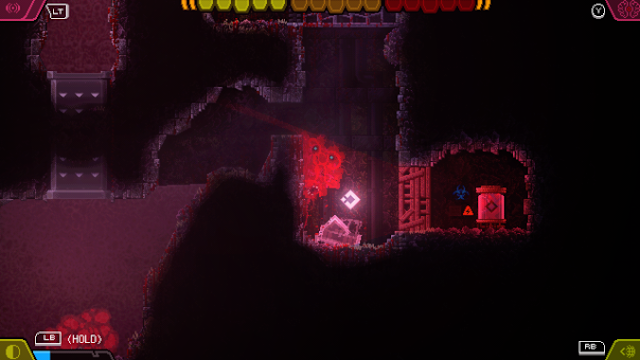 Just prior to the final stretch of the game, you will come across a door that you can squeeze through that leads into a room filled with large screens, showing the status of each area of the lab that you have just decimated. Most areas were marked as 100%, but had a small lock beside “Containment Unit”, showing that these were yet to be completed. Instead of having access to each of these areas via this room such as through ventilation shafts or anything that works! you have to once again backtrack to find the areas you’ve missed. Luckily these containment units are marked with a small glowing diamond - as shown above - which thankfully makes it a little easier to figure out where to go once you enter each area.

Quite a few of the upgrades that I gained via these containment units were by now pointless, such as the increased resistance to fire, as by this stage I’d already wiped out all enemies. A couple of the units I’d missed could have been done during my first time in these areas, however there are definitely a few that I’d have had to backtrack to no matter what, as access is blocked until you’ve gained particular upgrades. 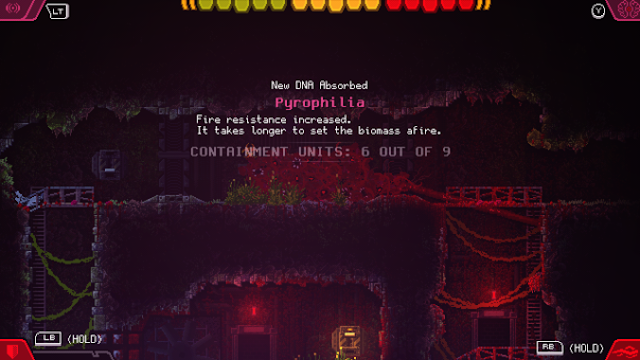 I had a great time playing Carrion, and my only real gripes are the amount of backtracking required, and that occasionally the normally-smooth movement would become a little jerky, usually when you’re at full size, as controlling a massive chunk of floppy flesh as you try to squeeze into a tiny gap in a wall becomes a bit of a nightmare (and frequently if you’re close to a one-way tube, these will somehow suck you in).

In the end, we decided to give Carrion the Collecting Asylum rating of 8.5/10.

Have you played Carrion yet? What did you think of it?
Let us know in the comments below!