In Windbound, the latest game from 5 Lives Studios, you play as Kara - a warrior separated from her tribe due to the harsh, stormy seas (and what is lurking beneath the surface). You wake up on a small island, with nothing to guide you. Chop some grass, gather some rocks and try to craft useful tools and weapons in order to help you on your journey.

Things seem fairly peaceful at first, small creatures pottering around as you collect stuff for your inventory; crafting a row-boat to move to another island. But you see, Windbound is a survival game - so things aren’t quite as simple as they seem. You must keep your energy up by regularly eating - whilst being aware that any food you collect will eventually rot - you must also be cautious of the wildlife roaming the islands, as even the small and unassuming can knock a fair chunk off of your health bar. 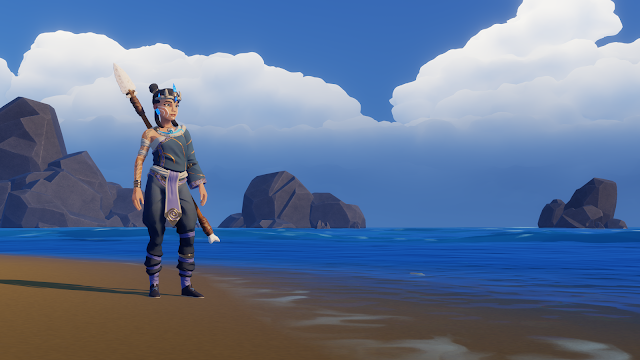 When you first start the game, you are given two options to choose between: the standard Survival style mode, or the Storyteller mode - which removes the extreme survival elements (such as being booted back to the start of the game upon death, with no items) to enable you to just enjoy the story if that’s more your thing. I am crap at survival style games. I really enjoy them, but I am easily distracted. I will quite happily wander around and explore, blissfully unaware that my health bar is depleting until it’s too late - so I went down the Storyteller route, whilst Allan battled against the Survivalist option.

A rogue-like action adventure, Windbound keeps you on your toes with its difficulty as a Survivor, but this is something that the game wants you to experience. Survivalist is considered to be the core gameplay option, allowing you to experience the harsh climates and the stresses of trying to survive when stranded alone. Weapons deteriorate, just like food, so being aware of this is also important. Frustratingly, my rock sling was almost broken, but would still allow me to wind up a new shot before breaking upon use - leading to no rock being fired. And with no other slings in my inventory I was now an open target, with nothing available to be crafted either. 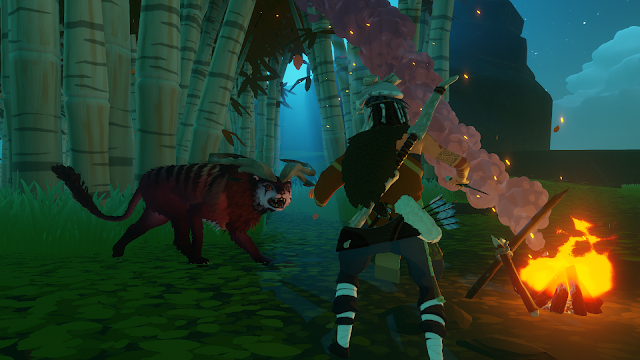 Windbound is very clearly inspired by games such as The Legend of Zelda: Breath of the Wild - the artistic style, as well as a lot of gameplay mechanics feel straight from the world of Zelda. Everything looks fantastic, and the world definitely had us interested. The more you explore around the islands available, the more you’ll find, and this helps to try and keep things fresh. Different islands can have different crafting materials, as there are five environment-types available and these determine what can be found and what fauna will populate the island. Sadly, whilst there are animals on the islands, there seem to be no NPCs available for you to talk to which makes the world feel very empty.

The sound design utilised in Windbound is incredible, with gorgeous piano melodies that work really well with the world. Sometimes though, you’ll hear certain noises that sound like they’ve come straight from BOTW, like when picking up items, etc. And this can sometimes be a little odd as, even though the game is inspired, you’d think they’d want to differentiate themselves from it. The tunes that play as you go out across the open seas are really enjoyable and make being out on your boat feel oddly relaxing - until you get caught at a particularly windy area. 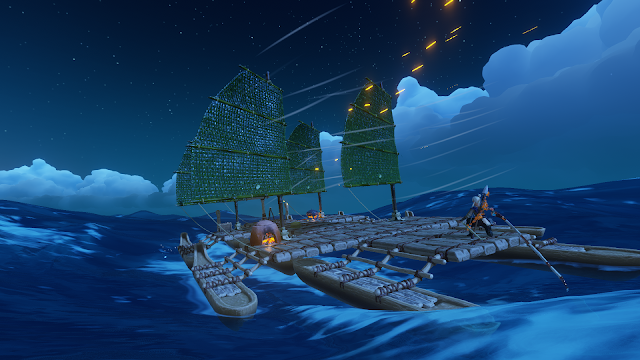 There’s a lot of repetition whilst playing through the story of Windbound, as each of the chapters require you to locate three Nautilus towers that you have to climb and activate before you can open a portal to the next chapter. And then you do that over again. The world seems vast and exciting when you first begin playing, but the repetition quickly makes you realise that it’s actually a lot smaller than you first thought - and if not smaller, then certainly less dense than I’d have hoped. It can become quite a chore to do the same routine multiple times over whilst trying to make it to the end of the game, so having a bit more variety in tasks would have been a massive improvement. Even having NPCs available to speak to and be given tasks by would have added a lot more life and variety to the mix, and is something that I can't quite understand the lack of.


Ensuring you always have ample food and weaponry is something of a priority as you travel from island to island. On my first run, the first island I woke up in had some small boar-like creatures that would drop meat when killed, as well as a few berry bushes. But as I travelled to the next island, already low on health due to running out of food, I realised I would need to stock up again - only to find that the only enemies on the next island were a few massive ones that my poor sling did nothing to (and I had no suitable items to make better weaponry) and two more tiny boars that barely filled Kara’s belly. Particularly if you're on a Survivalist run, as losing all progress multiple chapters into the game is heartbreaking, and due to the hard slog of getting that far in the first place can leave you feeling put off from trying again. 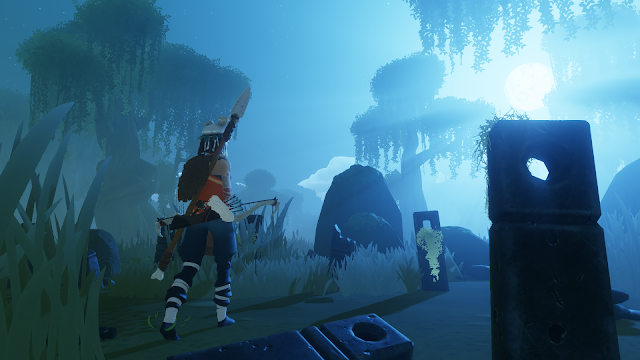 Released yesterday on Xbox One at the price of £24.99, it’s not too expensive for what it includes, and is an interesting game to play if you like exploration based titles. Combat isn’t really anything special and left us feeling a little deflated, as not much emphasis is put on it. There seems to be so much potential for Windbound, and I can only hope that they have plans further down the line to tweak things and expand upon certain areas.

On first glance, Windbound seems right up our alley, but with not much variation in gameplay and a very slow progression it left us feeling like a lot of opportunities were missed. Variation in enemies as the story progresses suggested to something deeper, and seeing these different enemy types was definitely interesting, as they grow bigger and more threatening as you go. You need to defeat different enemies for various resources, but this becomes a bit of a vicious circle as many will defeat you with ease, tossing you right back to the beginning again to start the story over.  And there’s only so many times you can do that without wanting to pull your own hair out. 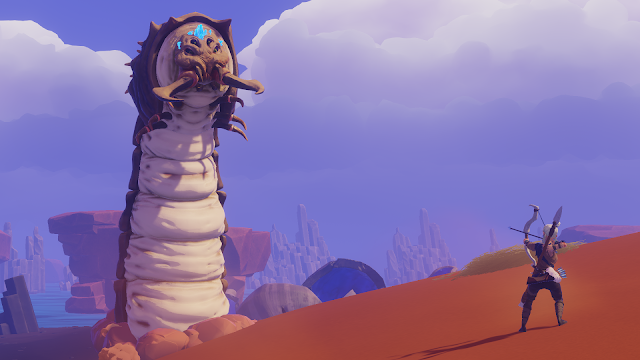 In the end, we decided to give Windbound the Collecting Asylum rating of 6/10.

Have you played Windbound yet? What did you think of it?
Let us know in the comments below!